No, Israel is not immune to the kind of fake news that today plagues the rest of the world. In many cases in the US and Europe, the accusation of “fake news” is flung about by those who simply don’t agree with media outlets representing the views of political opponents.

But an example from Israel this week can be described as nothing less than deliberately misguiding the public.

I won’t go so far as to say that the state-owned Kan 11 television channel engaged in outright deception. They were careful enough to leave a lot of question marks in Sunday night’s shock broadcast.

But when this Israeli news outlet excitedly reported on the discovery of a “secret river” in the south of the country, they did so knowing full well that it was nothing of the sort. At least not in the way that their viewers were sure to take it.

Miracle in the desert?

Since that broadcast, news of the “secret river” that was somehow concealed for decades has taken Israeli social networks by storm.

Some even jumped to the conclusion that this was yet another fulfillment of prophecy, in particular that which says that the Dead Sea will one day be filled with fresh water and that life will once again flourish in that desolate region.

But this “secret river” is not of the life-giving variety. In fact, quite the opposite.

The first give-away that this “river” isn’t really a river is the complete lack of any vegetation on its banks. Anyone who has visited Ein Gedi knows that even the tiniest stream in the desert facilitates an abundance of flora and fauna.

And then came the satellite images revealing the exact location of this “secret river,” something the original television report conspicuously left out. Turns out this river is nothing more than a channel carrying waste from the evaporation pools of the southern part of the Dead Sea (where the Dead Sea Works operate) to the larger northern part. 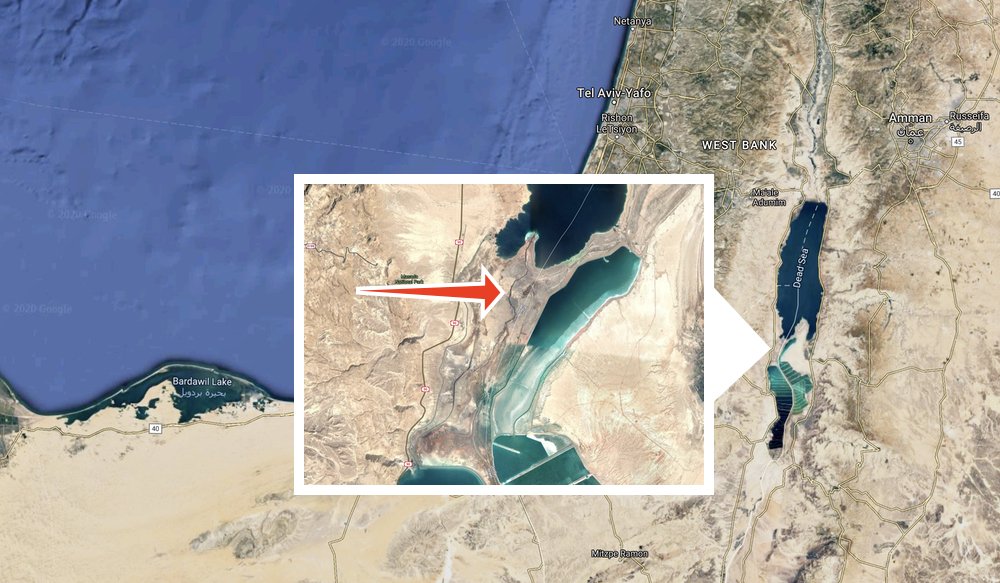 Yes, the flow is year-round and deep, and made for great evening news viewing. But what’s flowing isn’t what we’d classify as “water.”

It’s brine. The byproduct of evaporation and the harvesting of potash and other minerals.

Dr. Elad Dante works for the Geological Survey of Israel. He and other experts have been writing on this and other desert water flows for years in scientific journals that no one reads.

“The channel we see is a continuation of the Arava River north of the evaporation pools to the northern Dead Sea. The Arava River lengthened following the decline of the Dead Sea’s water level. In the past, the creek poured into the southern basin, and today after the erosion and evaporation in the 1980s, the creek now pours into the northern basin. Most of the Arava River only flows during floods. The section in question flows between the evaporation pools of Israeli and Jordanian Dead Sea factories, and is largely fed by the brine in the pools of these factories.”

Some have suggested that Kan 11 was merely reporting on what some local hikers told them, and shouldn’t necessarily be held accountable for the fact that this “discovery” turned out to be less than sensational.

But their reporters interviewed the hikers at the location, on live television. Had they bothered to zoom out the camera a bit, or showed an aerial view of where they were located exactly, most people would already have immediately realized the truth.

Maybe that’s why they didn’t.

Or maybe Kan 11 really did just get innocently carried away with a story that ultimately deserved much less attention than it received.

Either way, it wasn’t a difficult claim to verify, or in this case debunk, before going on air.

Look, I get it, all of us in media are constantly scrambling to increase clicks and viewership. It’s always tempting to oversell a story.

The trouble is that Israel has and continues to play host to many actual miracles. Hyping something that turns out to be little more than the result of industrial waste, while surely knowing how people were going to respond to it, only serves to weaken faith in the general article.