On Monday afternoon our family decided to get away from the heat by “immersing” ourselves in the pleasant waters of the Jordan River – just downstream from where it drains out of the big lake (the Sea of Galilee). Our favorite spot is past the tourist baptismal site called the “Yardenit” (the little Jordan), and just past the canoeing center called “Rob Roy.”

It’s a lovely little stretch of water well known to many locals. Water flow is regulated with a floodgate so that, for these 2 kilometers (1.5 miles), the river is deep enough to swim in. This is highly unusual in Israel which has few streams that don’t dry out during the summer, much less stretches of deep clean, fresh water without suspicions of sewage overflows being mixed in.

We set the rendezvous point for 5pm with friends who have recently returned to Israel after some years in Australia. I was anxious that the experience make a good “Israel impression” on them, since they were accustomed to easily finding pristine, uncrowded water camping spots “down under.”

I wanted to take them to this local iconic “water hole” where many young adults in the area go to swim, camp in tents, jump off bridges, and rope-swing off the steep banks and out over the shimmering water surface. Some of them unfortunately leave their trash behind. Our sons have hung out here for days on end, in spite of the occasional mosquito bite. This place existed as a mini-wilderness for many years with emphasis on the first four letters “wild,” as in wild behavior and no government cleanup and supervision.

Recently, the powers that be decided (correctly in my view) that this was indeed too special a stretch of nature reserve to be used only by local teenagers and their families. Huge earthmoving machines were brought in, lowering the “West Bank” of this section to make the river more accessible. In the process they also formed islands and walkways. [This part of the Jordan River is a few kilometers away from the border with the country of Jordan, so that both east and west banks are Israel’s.]

Monday’s outing was only the second time my family had visited the newly sculpted waterway.

We passed by the baptismal site usually full of white-robed pilgrims getting immersed. It is still dormant since COVID curtailed international tourism. Then we drove past dozens of cars thronging at the first entrance to the swimming area – almost losing hope that we could have a nice peaceful time in the water without all the “tribes” of Israel being packed in next to us like sardines. 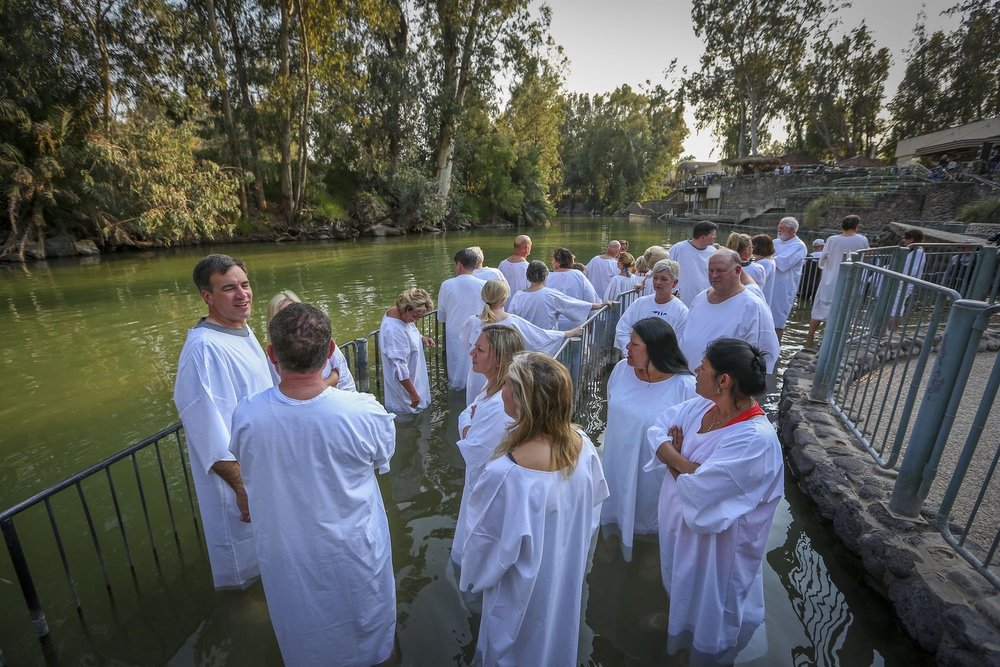 The pilgrim baptismal site Yardenit has sadly sat empty for the past year due to the COVID-19 pandemic.

We ventured further southward on the dirt road downriver, past groves of towering date palms and over sections of rocks packed tightly, wondering aloud whether this was part of the ancient Roman Empire cobblestone highway leading down to Jericho. When we reached the parking area downstream at the far end, there were almost no cars! Hope sprang into our hearts.

We turned off the air conditioner, grabbed our pool floats, pitas and hummus; and ventured out into the 35 degree Celsius air (95 degrees Fahrenheit), walking down the new concrete path to get to the water. Almost immediately, we found an empty stretch on the river bank sloping gently into the water so even our youngest kids could get in easily. Since the exit spillway from this section is controlled, the water is slow-moving, almost as safe as a swimming pool. Tall Eucalyptus trees grant generous shade, and amazingly, so far it looks like the level of trash has decreased.

As the two families waded into the Jordan, we couldn’t help but be impressed at the temperature, not too hot, not too cold – no adjustment needed, no sucking in of air to take a deep breath before you fully immerse yourself. Once inside the water we swam upriver a few dozen meters, passing one tiny “unclaimed” island a few meters wide and twice as many long, inhabited by a lonely Eucalyptus tree and some high grass. The next island upstream had been “claimed” by a group of seven Israeli teenage boys who wanted to make sure everyone’s heart in the area was still beating, and so entertained us with several minutes of “trance” music until their loudspeaker batteries died.

Across the river, about 15 meters away, an ultra-Orthodox family was picnicking. It was novel to see the father with his long side-curls (Pey’os) flanking a bare torso – no white shirt, no black coat and no black hat.

As I mentioned, our friends had just moved to Israel from Australia. There, the rivers and oceans are quite a bit colder and can hold certain dangers. Considering the recent flooding in Germany and elsewhere, and considering the fire raging this week just outside of Jerusalem, we had to count ourselves very blessed. I could understand why Elijah, John and Jesus waded into these waters.

Next time you are in Israel on a D.I.Y. tour we highly recommend adding this stop to your itinerary.