The book by Dr. Cohen is currently being published in Israel under the title The Mufti and the Jews– The Involvement of Haj Amin al-Husseini in the Holocaust and His War on the Jews of the Arab Countries 1935-1946. This study reveals in detail the agenda of the Mufti, who lived in Germany from 1941 to 1945.

Although much research has dealt with the personality of al-Husseini since the defeat of Nazi Germany up until today, no examination has used Arabic-language sources that cover the previously unknown activities that were conducted by the Mufti against the Jews, including statements by him of his intentions. The vast majority of such research would have to be based on Arabic-language material, derived from documents in the Mufti’s personal archives, which were located in various German agencies and were confiscated by the Allies at the time of their invasion in May 1945. The book is based on this new and unfamiliar material and gives important new insights into the events of the time.

Following World War II, with American assistance, a copy of the Mufti’s personal archive was delivered to the State Archives of Israel. The aim was to help find incriminating details about the Mufti and of his involvement in the war, but the Mufti escaped trial and lived in Lebanon until his death in 1974. 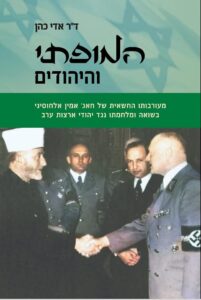 The material on which the book is based is cataloged in the 1948 Collection of the State Archives’ Abandoned Certificates Division and in the Sub-Division of Abandoned Certificates-Mufti Archive Haj Amin al-Husseini. The archive contains dozens of files belonging to the Mufti, most of them containing documents in the Arabic language, including speeches, letters and propaganda materials which are being examined for the first time. The archive also includes the personal diary of the Mufti, written in his own hand during the years 1941 to 1945.

Dr. Cohen’s book is divided into three parts, and deals with the Mufti’s activities in Palestine, Iraq and Germany. Very little has been known of the activities of the Mufti in these countries. The documents from the countries mentioned above reveal previously unknown aspects of his secret war against the Jews, an ongoing war which was motivated first and foremost by racism and hatred of the Jews.

The book deals mostly with the Mufti’s many activities in Germany and with his cooperation with the Nazis. During his stay in Germany, the Mufti headed the Arab office in Berlin and was a close associate of the Nazi leadership, including Gestapo head Heinrich Himmler. The Mufti was the head of Arabic-language propaganda. He distributed leaflets, recruited secret agents who served in Britain and participated in the persecution of Berlin’s Jewish community.

The final chapter of the book deals with his escape from Germany at the end of the war and his arrival in France. He was under house arrest for about a year until he escaped on a forged passport from France to Egypt, in 1946. This material is from one of the archives in France, and has only been made available to the general public in recent years.

More than 75 years have passed since the end of World War II, yet no one has satisfactorily researched the archives of the Mufti of Jerusalem, Haj Amin al-Husseini, in the Arabic language. His speeches, the proclamations he wrote, even his memoir have not been translated into any other language. The documentation that is being made available through the book The Mufti and the Jews describes for us the depth of his cooperation with the Nazis in everything related to their propaganda that was directed at Arab countries.

Little has been written about this Nazi propaganda. This book presents for the first time a detailed account of the Mufti’s efforts among the Arab nations to present Germany in a positive light, thru a variety of methods: radio, printed press, cartoons, leaflets, etc. The book also presents the Mufti’s personal political aspirations that focused first and foremost on the expulsion of the Jews and the British from Palestine and from all Arab countries, the liquidation of the Jewish national home and the establishment of an Arab empire, of which he would be the undisputed ruler. This empire was to include Palestine, Lebanon, Syria and Iraq.

Published in Hebrew by Ariel Research Center for Defense and Communications, 192 pages. Available at https://www.facebook.com/muftibook