Cartoons and caricatures have always been an effective tool to deliver a punch. As Israel approaches its third election in less than a year, the use of such imagery on social media reveals just what Israelis really think of the two men vying to become Israel’s next prime minister.

The cartoons shown here have all appeared in social and digital media. Some of the cartoonists are professionals whose works also appear in major newspapers. Others, who are lesser known, publish their works on Facebook, Twitter and digital magazines of various kinds.

Arnon Avni’s work below, published on the daily online magazine “On The Left Side,” is framed in the context of the illegitimate King Adonijah, who hoped that clinging to the alter would save his life. The verse from 1 Kings 1:50 reading “he arose, and went and took hold of the horns of the altar” is shown at the bottom left. The three people sitting behind the desk are called the “ballot priests.” Netanyahu is shown hugging the ballot box for dear life. The overall image is of an illegitimate prime minister creating one election after another in hope of avoiding his unavoidable demise.

In his work published on the Twitter account of the daily newspaper Ma’ariv, Uri Fink plays on what some see as messianic expectations of Netanyahu, coming from both secular and religious right-wingers, represented here by known television hosts Avri Gilad (secular) and Shimon Riklin (religious), as they watch Bibi and his wife ride in on Messiah’s donkey. The cigar and pink champagne allude to Case 1000 dealing with the alleged illegal gifts they received from wealthy backers. “This isn’t exactly what we expected,” says a bewildered Riklin to an angry Avri.

The crude cartoon below, for which someone called Goldweitz took credit, uses a picture from the internet and adds to it what many think of Gantz. In its Israeli context, this picture shows the blind Gantz leading the blind. The text is a quote from a nameless “Blue and White” voter who says, “We have no idea what he thinks about anything, but hey, let’s follow Gantz.”

Below is Mendy Yeroslavsky’s contribution to the little known Orthodox Jewish magazine Shacharit, that alludes to Gantz’s “strategy of silence,” which some have mocked as “the sound of silence,” that characterized his first election campaign. 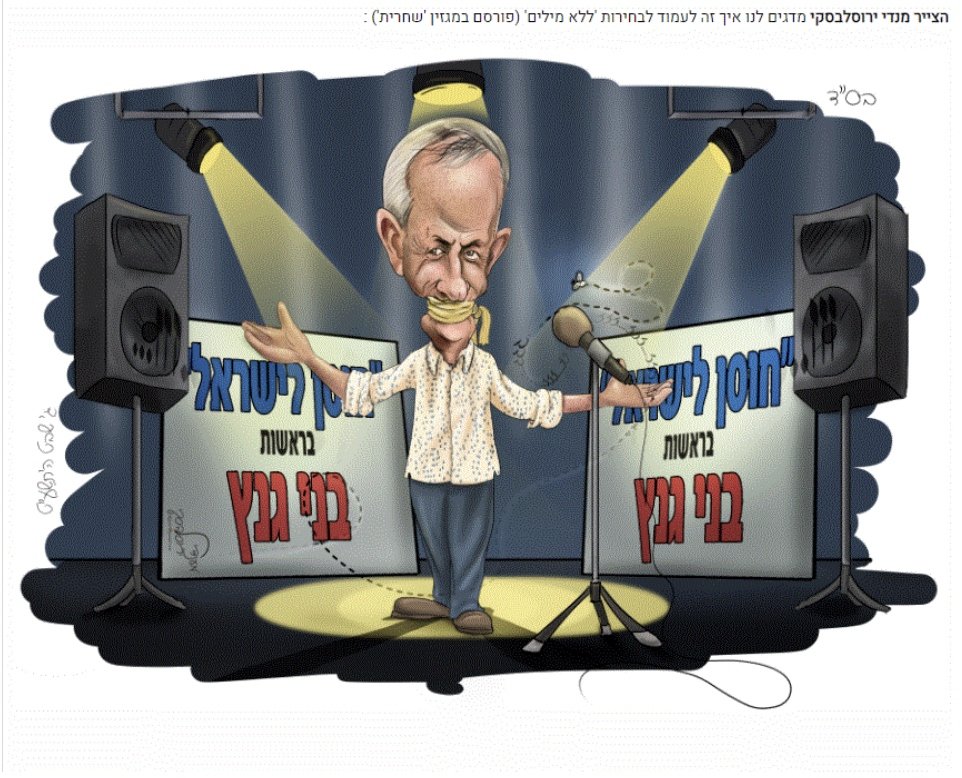 After being forced to finally break his silence, Gantz ended up making gaffe after gaffe. His awkward speeches and interviews resulted in a comparison between Gantz and Forrest Gump that was reproduced on several social media pages, including this one by Likud activist Tsahi Hagag.

And finally, Yossi Shachar’s work for Arutz 7 depicts the religious Zionists as Messiah’s donkey being fooled into giving a ride to Netanyahu thanks to a “carrot” it will never reach. Here instead of a “carrot,” the donkey is being led by a piece of paper reading “sovereignty” [over the Jordan Valley and Jewish settlements].