Thursday’s Jerusalem Gay Parade was expected to be the largest ever in the Holy City.

Since Jerusalem is forced to host this parade by Supreme Court order, 2,500 police officers were deployed to make sure potential counter-demonstrators were kept at bay. The fear of another ultra-Orthodox fanatic like Yishai Schlissel is very real for many. During the 2005 Jerusalem Gay Parade, Schlissel stabbed a number of marchers and spent 10 years in prison for his crime. Soon after his release, Schlissel showed up at the 2015 Jerusalem Gay Parade and stabbed seven more marchers, killing one, 16-year-old Shira Banki.

The first Jerusalem Gay Parade took place in 2002, and despite protests has continued relatively undisturbed ever since. Over the past 17 years, Israelis have either embraced the LGBT agenda, or become fearful of protesting against what, while still a tiny minority group, is a movement backed by practically every power stronghold in Israel.

Evidence of this could be found in the short-lived advertising campaign of the Hazon (Vision) organization, which seeks to advance a Jewish agenda in Israel.

Haimi Teitelbaum, one of Hazon’s leaders, explained the reason behind this initiative earlier this year: “Judaism is breaking its silence, our years-long silence has severely damaged the Jewish character of our country.” Posters placed around Jerusalem by the group this week read: “Father + Mother = Family. The courage to be normal.” It was a clear protest against the gay parade itself, but also a statement that there are those in Israel who refuse to capitulate to the LGBT (read: progressive) agenda. 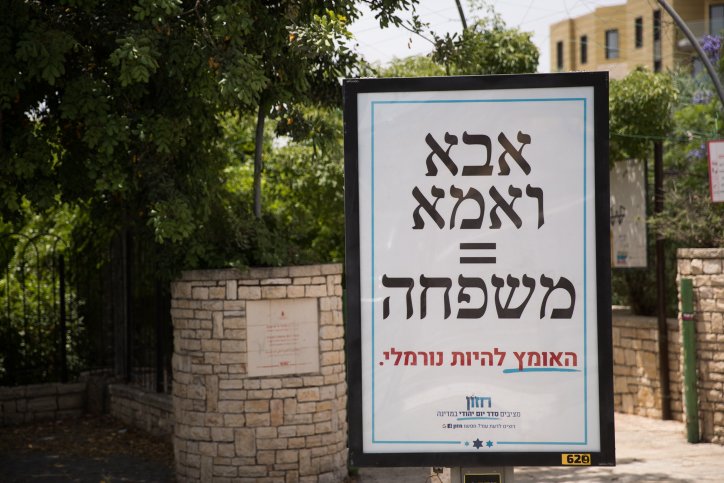 (The sign reads: “Father and Mother = Family. The courages to be normal.)

Shortly after the posters went up, a gay couple vandalized a few of them to read: “Father + Father = Family.” And instead of “The courage to be normal,” they placed a sticker reading “love your neighbor as yourself” over the LGBT flag.

Michal Rozinof of the extreme-left Meretz party loved it, and wrote on her Facebook page: “Sweet gay couple from Jerusalem went over a few of Hazon’s homophobic posters and corrected them…Truth is, looks much better.”

Hazon’s posters were also too much for Jerusalem’s new mayor, Moshe Leon, who quickly ordered them removed. This took many by surprise given that Leon himself is religious and was elected mayor thanks to the ultra-Orthodox community of Jerusalem. Leon justified his decision as an effort to avoid “hurting the public’s feelings.” It was a strange excuse considering that the gay parade itself hurts the feelings of devout Jews, Christians and Muslims, who make up the vast majority of Jerusalem’s public.

Given this, it is more likely that Leon anticipated legal repercussions, and chose to nip this campaign in the bud before it could spark a legal conflict that would surely favor the LGBT movement.

But Hazon isn’t giving up, and intends to appeal before the Supreme Court in an effort to reverse Leon’s decision. Meanwhile, a caricature of Leon holding the LGBT flag in his hand while trampling over a “family” flag is going viral on social media. Explaining his caricature, artist Or Reichert wrote that “Leon and the municipality of Jerusalem have surrendered to the progressive silencing [of the majority of Israelis].”