Find testifies to an ‘exit from the walls’ in First Temple period Jerusalem, which indicates a period of security

Who was privileged to live in the monumental structure possessing a breathtaking view of the City of David and the Temple, which was uncovered in an archeological excavation on the Armon Hanatziv (Commissioner’s Palace, also known as Governor’s House) Promenade? Was it one of the Kings of Judah, or was it perhaps a Jerusalemite family of nobility and wealth during the First Temple period?

A rare, impressive, and very special collection of several dozen adorned architectural stone artifacts, which together were part of a magnificent structure, was discovered in the Antiquities Authority’s excavations in preparation for the establishment of a visitor center on the promenade, at the site where the home of artist Shaul Schatz once stood. The excavations were funded by the Ministry of Tourism, Jerusalem Municipality and the Ir David Foundation (Elad).

These stone artifacts are made of soft limestone, with decorative carvings, and among them are capitals of various sizes in the architectural style known as ‘Proto-Aeolian’ – one of the most significant royal building features of the First Temple period, and one of the visual symbols of the period. The importance of this artistic motif as a symbol representing the Kingdoms of Judah and Israel led the Bank of Israel to choose it as the image that adorns the five-shekel coin of the State of Israel.

The unveiled collection includes, among other things, three complete medium-sized stone capitals and items from lavish window frames, incorporating balustrades composed of stylish columns on which a series of Proto-Aeolian style capitals of a tiny size were affixed.

According to Yaakov Billig, Director of the Israel Antiquities Authority’s excavation: “This is a very exciting discovery. This is a first-time discovery of scaled-down models of the giant Proto-Aeolian capitals, of the kind found thus far in the Kingdoms of Judah and Israel, where they were incorporated above the royal palace gates. The level of workmanship on these capitals is the best seen to date, and the degree of preservation of the items is rare.”

It was with great surprise that two of the three column capitals were found neatly buried, one on top of the other. “At this point it is still difficult to say who hid the capitals in the way they were discovered, and why he did so, but there is no doubt that this is one of the mysteries at this unique site, to which we will try to offer a solution,” Billig adds. 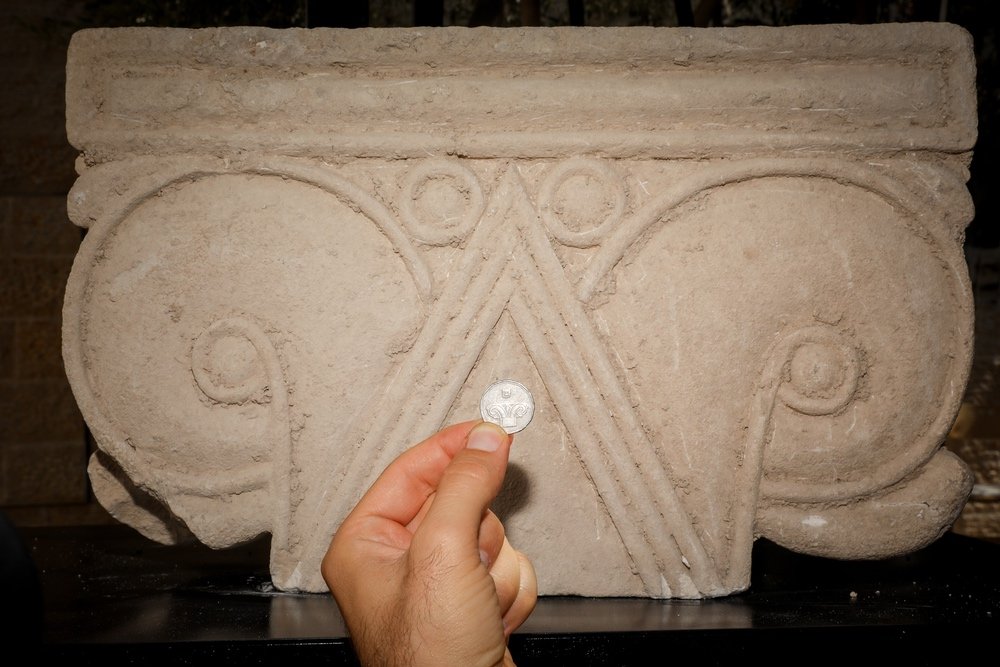 This very design is the one used on Israel’s five shekel coin, a firm testament to Jerusalem’s biblical past.

Unlike the capitals, which were discovered preserved in excellent condition, the rest of the building was destroyed, probably in the Babylonian destruction of Jerusalem in 586 BC or thereabout. The remains of the building were demolished and dismantled for the purpose of making secondary use of the valuable items.

In Billig’s estimation, the magnificent structure – built in the period between the days of King Hezekiah and King Josiah – indicates the restoration of Jerusalem after the Assyrian siege of the city in 701 BC, during the reign of King Hezekiah – a siege which the city barely survived.

“This discovery, along with the palace previously uncovered in Ramat Rachel and the administrative center recently uncovered by the Israel Antiquities Authority on the slopes of Arnona, attests to a new revival in the city and a somewhat ‘exit from the walls’ of the First Temple period, after the Assyrian siege. We reveal villas, mansions and government buildings in the area outside the walls of the city. This testifies to the relief felt by the city’s residents and the recovery of Jerusalem’s development after the Assyrian threat was over,” says Billig.

Israel Minister of Culture and Sport, Hili Tropper said: “I am happy and excited with the revelation of the remains from the period of the Kings of Judah. The uncovering of the remains of the building reflects the glorious roots of the Jewish people and our rich past here in the capital city Jerusalem. I see great importance in the work of the Israel Antiquities Authority and in the work of the City of David in their discoveries over the years, which reveal parts of the illustrious Jewish past. This is an opportunity to thank the Ir David Foundation (Elad) that funded this important excavation. The past is the cornerstone of a nation, and the cornerstone of culture, and its discovery also affects the present as well as the future. The Ministry of Culture and Sports will continue to support this important enterprise of heritage, history, and culture.”

Recognition of the strategic and panoramic nature of the area was also expressed some 2,600 years later, when the British Mandatory administration built its central seat of government, known as the “Commissioner’s Palace” (Armon Hanatziv) there. A few decades later, one of the most famous promenades in the State of Israel was established on the site, the Armon Hanatziv Promenade, from which the spectacular view of the City of David and the Temple Mount can be seen to this day.

Kippur and Corona: Why This Day of Atonement is Different

The Pilgrims Way: A Live Tour “Up To” Jerusalem’s Temple