With the assistance of the Israel Ministry of Tourism and the Golan Economic Society’s Tourism Division, Jerusalem Santa Issa Anis Kassissieh on Wednesday filmed a Christmas greetings video on the Golan Heights, with its holy sites and breathtaking views of the Sea of Galilee, to be distributed worldwide in December.

According to Issa, he chose to shoot this year’s Christmas greeting on the Golan Heights because it is a unique area that combines rivers and water sources, orchards and vineyards, hiking and biking, breathtaking views over the Sea of Galilee and holy sites. He added that he is looking forward to returning to the Golan Heights when the area will be covered in snow later in the winter. 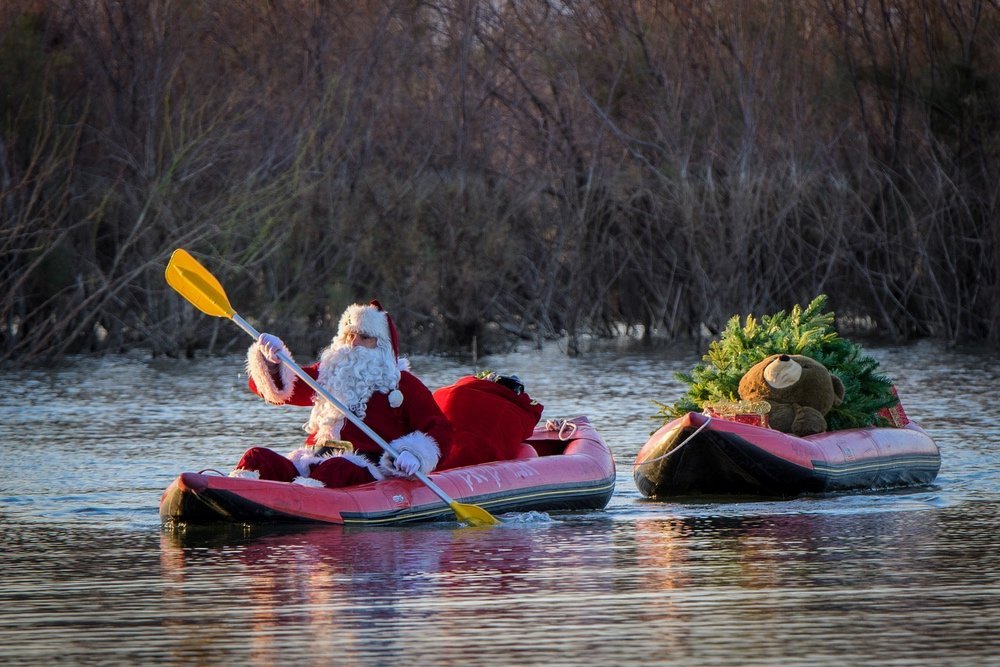 Too warm for a sleigh and with no reindeer in sight, Santa breaks out his kayak instead.

Santa’s journey today began at sunrise, on a kayak on the River Jordan, carrying his Christmas tree and presents, followed by a stroll through the citrus and almond orchards typical of the Golan landscapes. After cycling with British cycling star and four-time Tour de France winner Chris Froome and his fellow team members of the Israel Start-up Nation professional cycling team who are currently touring Israel, Issa ended the day at the Kursi National Park, site of the Miracle of the Swine. There, as the sun set overlooking the Sea of Galilee, he spread his message of love, peace and joy to the children of the Golan Heights.

Israel Minister of Tourism Yoel Razvozov: “Promoting religious tourism to the Holy Land around the world is one of my most important missions as Minister of Tourism. Religious tourism builds bridges between peoples and countries, strengthens our international and diplomatic relationships and represents an important anchor for incoming tourism. The Israel Ministry of Tourism will continue to invest significant resources and efforts in maintaining, improving and making accessible tourist sites that are significant for all faiths for tourists from around the world.”

Manager, Tourism Division, Golan Economic Society Limor Portal: “We are proud and pleased that the Ambassador for the Holy Land Santa chose to film his Christmas greetings video on the beautiful Golan Heights. This stunning area, with its breathtaking views and unique sites, attracts hundreds of thousands of visitors every year from around the world. We are excited about the re-opening of Israel’s skies and the return of incoming tourism. Israel is a religious and tourism destination for more that two billion Christians around the world, and we are sure that this Christmas greetings video, with its views of the Golan, will encourage them to visit and add the Golan heritage sites, promenades and produce to their Israel vacation experience.”