Like a claw-footed dragon, Islam squats on Mount Moriah, forbidding Jewish and Christian prayer anywhere on the Herodian platform; lashing its tail at the very thought of our presence. And yet, this is the Mountain of the LORD God of Israel — His holy hill.

Then I heard Him speaking to me from the temple, while a man stood beside me. And He said to me, “Son of man, this is the place of My throne and the place of the soles of My feet, where I will dwell in the midst of the children of Israel forever. No more shall the house of Israel defy My holy name…” (Ezekiel 43:6-7a)

It’s as predictable as it is inevitable: The Jews head into a celebration in Jerusalem — whether for an Israeli event like Jerusalem Day or a Hebraic holiday like Passover — and their thoughts turn towards their holiest site, the primary point of focus of the prescribed Feasts of the Lord. An overzealous handful might make noises about rebuilding the Temple and offering sacrifices, but 99 percent of Israel’s devout Jews simply think about the House of worship they once had, mourn its destruction and pray for its restoration, which Scripture tells them will happen one day — when Messiah comes.

No matching peaceful hope on the Muslim side. Not on your life. The Arabs’ thoughts, and actions always, always, turn violent. Notwithstanding their refutation of any Jewish Messiah, and despite their five-times-daily, in-your-face, insistence about Allah being akhbar (greater) than any other god (especially the God of Israel), they rally furiously in their deity’s defunct defence.

(A question that begs scrutiny is whether the Arabs really see the Jews’ actions as a provocation, or whether they don’t rather seize on them as convenient cover for furthering their grand politicising plan: the Islamisation of Jerusalem? From the 1920s into the 2020s — history answers that.)

And then this, too, has become the norm — a kind of three-step dance: As Arab lawlessness escalates, and Israeli law keepers move in, the international community begins levelling messages of grave concern, in Israel’s direction, about Jerusalem’s (as in the government’s) handling of the situation. Little, if any, verbal global gunfire is directed against the Arab fomenters and perpetrators of disorder. Obviously. 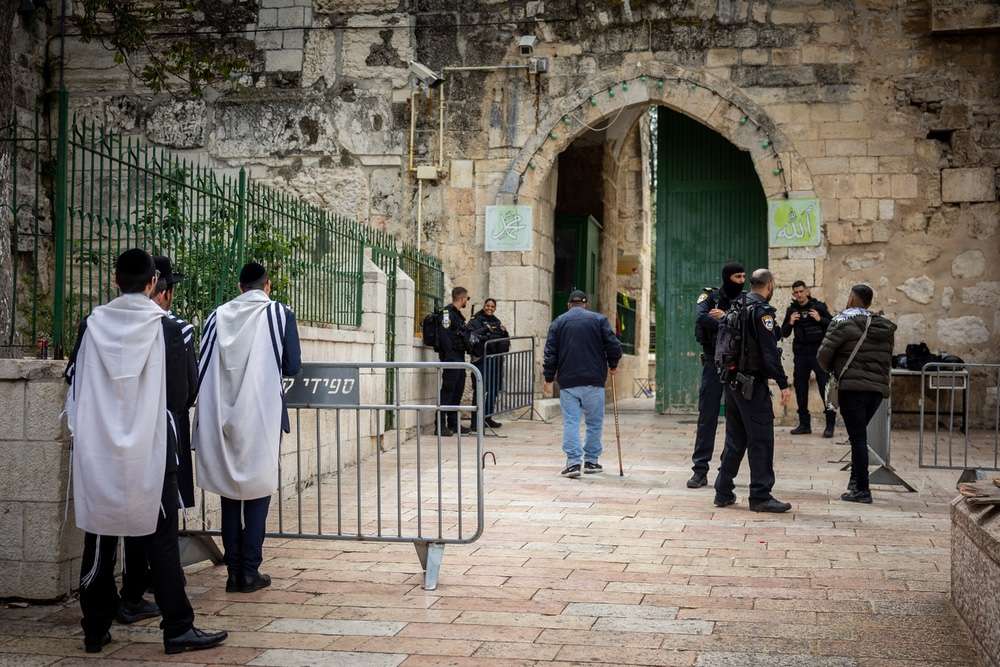 Muslims stroll freely into the Temple Mount courtyard, while Jews must remain outside. Photo: Yonatan Sindel/Flash90

So, this year we had hopeful Jewish announcements of intent during Passover to ascend the Mount (to pray, not to fight with anyone), Arab snarls of “don’t you dare“! A single group of Jews said “let’s offer sacrifices” (something no recognised Jewish religious leadership sanctioned) and would-be “champions of Al-Aqsa” — the Arab terror group Hamas — sounding off. Arab “worshippers” prepared stones and Hamas banners for the confrontation they wanted, and launched it against Israel’s police — who were keeping their distance so as not to provoke. And thus, the fuse was lit. Then, right on cue, the US State Department “let’s Israel know” that it is extremely concerned about its response. Arab and Muslim governments pile on with their condemnations, and the useless, increasingly non-representative, Palestinian Authority steps up to the microphone and warns Israel not to “divide” the Temple Mount.

What’s it all about? Why, nothing more than a scrubby little limestone hilltop — one that sits sort of deferentially lower than the Mount of Olives and the (incorrectly identified) Mount Zion. Nothing more.

As they say here: the heart of Israel is Jerusalem, and the heart of Jerusalem is the Temple Mount. This is Biblical. Which, given the actuality on the Temple Mount today — where Muslims are allowed to have their way, and Israel defers — makes the following a valid statement: Jerusalem is still trodden down by Gentiles. The site’s desolation rendered 2,000 years ago remains an abomination.

Not for the Christian world, though. We — and this is as distressing as it is vexing — are appallingly disconnected from this hilltop. Even as we call Jerusalem “the city of the great King” (Psalm 48:2; Matthew 5:35), we pay scant attention to the place where that King will sit enthroned.

Throughout the ‘Easter weekend,’ for example, our attentiveness has been on a tomb (very likely not the right one) in which — says the Bible — Jesus lay dead for three days. Of itself, that is quite okay (more than okay, if we can just shun the pagan parts of “Easter”). The Empty Tomb is surely to be celebrated. And our faith in Jesus and the eternal life He has gifted us with is paramount. Which is why the Garden Tomb and Holy Sepulchre sites are thronged by Christians all year round.

But how is it that we almost completely disregard the mountain (unequivocally the authentic one) from where — the same Bible says — the earth will be governed for a thousand years by the gloriously-alive Messiah? 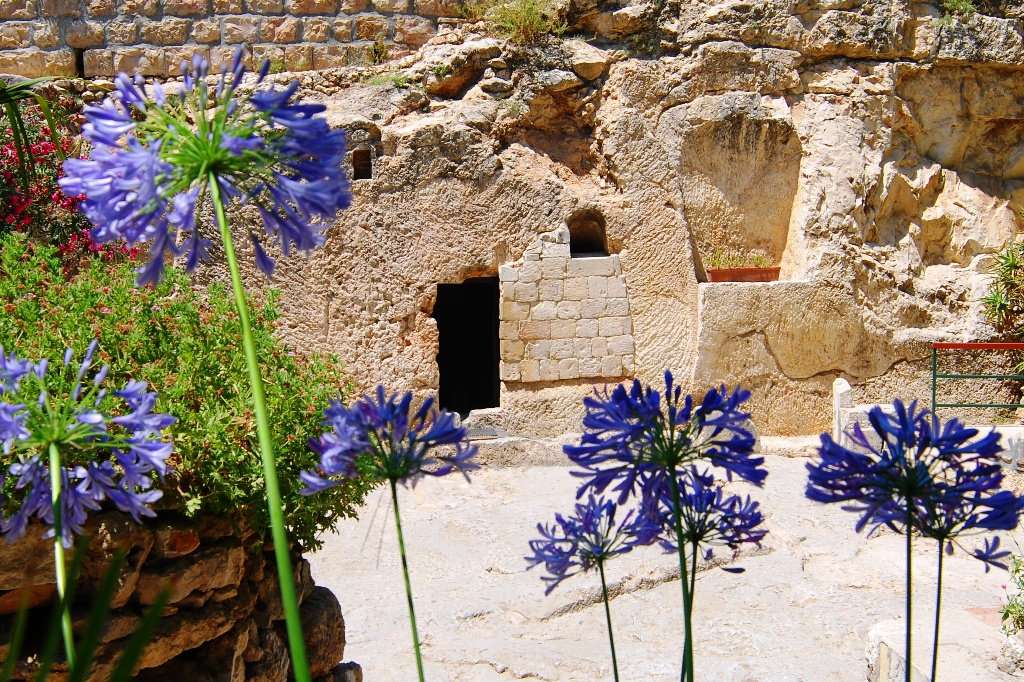 We rightly celebrate his victory of death, but why not look to the place to which he will return, and from where he will rule? Photo: Adam Raynolds/Flash90

Here’s a notable parallel: The Jews’ holiest site is not, as is often ignorantly supposed, the Western Wall. It is the hill behind that wall: Mount Moriah. Nor is true Christianity’s holiest site the cynosure of the Holy Sepulchre. Rather, it is the hill which that originally-Constantinian-construction was deliberately designed to divert us from: Mount Moriah.

God’s Enemy has no delusions about the history or the future of this site. Just try taking a Bible (even a tablet with a Bible app) onto the Mountain. You won’t be allowed to. When up there, do not talk aloud about the Temple that once was, much less about the one that will be in the future — you’ll provoke a clash. And whatever you do, do not kneel to pray — don’t even move your lips in prayer: You’ll be arrested. (Speaking from personal experience here.)

Now it is probably unnecessary to say, but I will anyway — for the record: I cannot support any violent human effort to bring about a change in “the status quo” on the Temple Mount. But honestly, from what I read in the Bible, I don’t need to even anticipate it; no such action will be required: The LORD has the future of that place guaranteed. As He told Zerubbabel concerning the building of the Temple in his day: “‘not by power, nor by might, but by My Spirit,’ says the LORD” (Zechariah 4:6).

I do think, in fact I deeply believe, that as watchmen on the walls of Jerusalem we should focus our gaze and join our prayers over this Hill. Concerning the future glorification of the city and, specifically, of the place where God “will dwell in the midst of the children of Israel forever,” for him who has eyes to see and ears to hear, Psalm 46 says it all.