Tel Aviv has finalized plans to convert the city’s streets into “smart streets.” Initially, a pilot project is to be implemented over a distance of 600 meters using technology that will charge cars with electricity while driving. If the project is successful, the city wants to equip as many streets as possible with this technology. 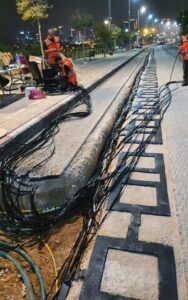 Laying ElectReon underground cables to convert a section of the existing road into a road that charges electric vehicles as they drive. (Photo: Tel Aviv-Jaffa Municipality)

The concept was developed by the Israeli company ElectReon, headquartered in Moshav Beit Yannai. The company lays copper coils under the asphalt and these transmit electricity to the cars above, which are in turn equipped with receivers. The mechanism absorbs the energy and then transfers it directly to the car battery and, for hybrid or electric-powered cars, to the engine. This not only eliminates long charging times for electric-powered cars, it also eliminates the need for expensive and heavy car batteries.

In the pilot project, only buses will initially be equipped with a receiver for electricity from the road. Other public transport vehicles as well as large trucks will be added at a later date. In the long term, this technology could make the use of electric cars much easier and more efficient, and gas stations could disappear from the cityscape. And, of course, this effort would decrease pollution significantly.

ElectReon has already installed a smart road of 4.1 kilometers in Sweden that runs between the airport and Visby city center. Another will be installed in Karlsruhe, Germany at the end of the year.