Numerous people over the past few weeks have all sent me the same video clip, in which Rabbi Amnon Yitzhak speaks about the New World Order and “Agenda 21.” During the four-and-a-half minute clip, the 67-year-old rabbi reveals the diabolical scheme based on a document in his possession. He warns the world of what is in store for us by the year 2031.

“You will not believe what you are about to hear,” Rabbi Yitzhak reveals in a dramatic voice and with a theatrical glare into the camera. “Prepare yourselves. Take a deep breath. Do not despair, for ultimately there is a God in heaven, and He holds the reins in His hand.”

When I watched this short clip for the first time I, too, was overcome with fear. We can say goodbye to the world as we know it. Right now, Amnon’s warning is circulating all over the world on social networks with German and English subtitles. I have been asked what I think about it, and who this Rabbi Amnon Yitzhak actually is?

I have been following Rabbi Yitzhak’s presentations for years. He has become famous for this type of preaching both in Israel and abroad, as he seeks to draw Jews back to their faith. In the 1990s in particular, he filled whole stadiums. In Hebrew, this movement of return or repentance towards God is called teshuva.

In 1986, at the age of 33, Rabbi Yitzhak founded the Shofar Society. He was the first rabbi who exploited the new technology of the Internet. At first, he disseminated his sermons on video tapes, then on DVDs, and now via YouTube. Initially, he warned his Jewish listeners that anyone who did not keep the biblical commandments would consequently be punished by hell. He grappled with science and the theory of evolution, and demonstrated to his listeners that the Bible was right. In the year 2011, together with his followers, he smashed 1,000 television sets in front of the National TV Broadcasting Service building in Jerusalem.

At the high point of his career he attempted, in the year 2012, to be elected to Israel’s 19th Knesset with his newly formed party. Rabbi Yitzhak predicted a great electoral victory for himself and his party, which promised, among other things, to slash the price of bread to just one shekel (about 25 cents or 30 pence), make essential medications free, give plots of land to young married couples, eliminate sales tax, increase the speed limit to 140 kilometers per hour (87 mph) and lower gas (petrol) prices. This angered his rivals in the Shas Party, which led to a conflict within Sephardic Orthodoxy. Ultimately, Rabbi Yitzhak’s party was a fiasco, which had a marked effect on his career. In the subsequent years, he disappeared completely from the political and religious scene. He had clashed with the leading rabbis in the Land and thus lost their blessing for his popular repentance movement.

When Rabbi Yitzhak did surface, he usually sparked controversy:

In his new video, Rabbi Yitzhak insists that “Bill is looking to make billions on the vaccination against Corona.” For this reason, the rabbi rejects any kind of vaccination, certain that they are all part of a conspiracy in which the New World Order and the Freemasons will use these injections to implant microchips in the population. He has spoken on the topic often, though some of the videos have since been deleted from YouTube. 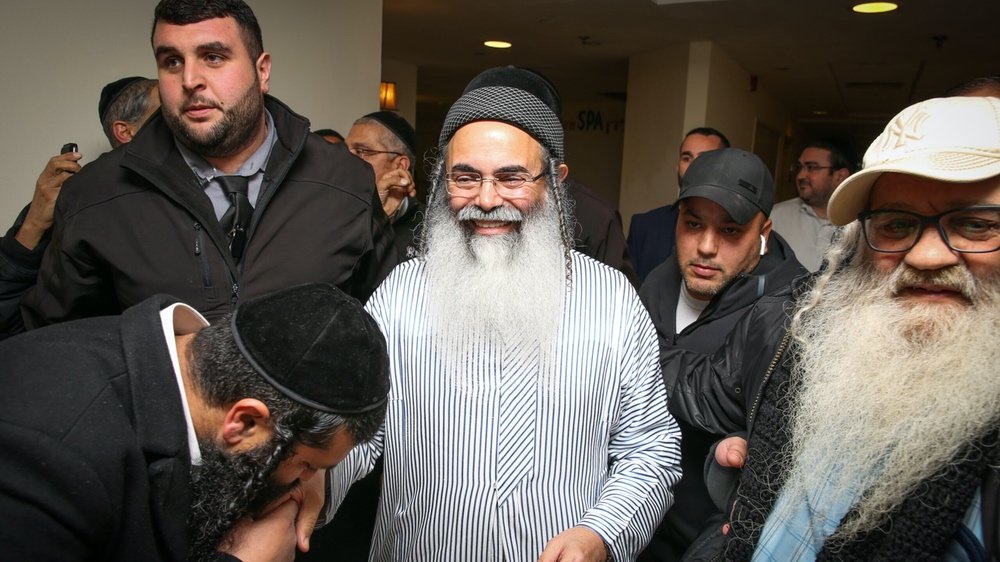 Rabbi Amnon Yitzchak appears for a lecture in the city of Tiberias in the north of the country on March 3, 2019

Rabbi Yitzhak was making waves long before he became famous. Back in 2003, he incurred great resentment when he compared Hitler and Herzl: “There have been two great villains in the history of the Jewish nation, Adolf Hitler and Theodor Herzl. Hitler wanted to destroy the bodies of the Jewish people. Herzl wanted to kill their souls, which is far worse.”

However we look at it, the fact is that over the years the Rabbi has lost his public following and is continually trying to make new headlines. The question is whether it was solely the people’s disappointment that led to them turning away from Rabbi Amnon. Did a religious aspect also play a role here? After all, the Jewish people take the Torah at its word, and it states unequivocally what we are to think about people who disseminate false messages and prophecies. “When a prophet speaks in the name of the Lord, if the thing does not come about or come true, that is the thing which the Lord has not spoken. The prophet has spoken it presumptuously; you shall not be afraid of him” (Deuteronomy 18:22). And in verse 21 it states very clearly that we are to judge a false prophet according to these criteria. God hates the false prophets to such an extent that He even instructed the people in those days to put such charlatans to death (verse 20).

As God is the same yesterday, today and forever, Christians should likewise assume that even today false prophets remain an abomination before God. Of course, the death penalty is no longer used today, as these are much different times with very different civil laws. But we must continue to let the Bible inform our engagement with such questions and predictions. Scripture tells us quite clearly what God thinks of false prophets, so why do so many Christians still allow themselves to be influenced by those who claim to have heard from God, but whose prophecies never come to pass? They are then either quickly forgotten or remembered with a shrug of the shoulders. Why is this so? Why are so many people so easily led astray? Why are we no longer testing the spirits, as the Bereans in Macedonia did in their day, when they carefully examined Paul and his teaching to make sure it lined up with Torah?

Neither Jews nor Christians are immune to falling under the spell of false prophets. What is important is that we refer back to the Word of God and test everything and everybody. Every year Christian preachers seem to nominate a new anti-Christ – of late it was Putin and Obama, but before them came Brezhnev, Sadat, Kissinger, Khomeini and various popes.

How often has the end of the world been prophesied? How often has the coming of the Messiah been predicted? As the year 2000 approached, American preachers were adamant that Jesus was about to set foot on the Mount of Olives.

The difference between Jews and Christians can be seen in how they react when these prophecies are not fulfilled. The false prophecies of Christian preachers are quickly forgotten. But in the Jewish world, more care is taken when dealing with the prophetic. It is true that the rabbis sometimes argue and accuse one another of being false prophets. But prophecy is not a central issue in the Jewish faith, as it often is in Christian circles in the West. In Judaism, it is frowned upon to wield prophecy as a religious or political tool. God is creative when it comes to fulfilling His promises. He does indeed fulfill them, but often in unforeseen ways, or at a different point in time to what we were expecting. It was not without reason that God made us free-thinking, without which critical thought would not be possible.