By any journalistic standard, the promise of attorney Sidney Powell to “release the Kraken” should have been a big story. Responsible journalism should at least have tried to verify whether or not the allegations of wide-scale election fraud laid out by Rudi Giuliani and Sidney Powell on November 19, when Powell coined her enigmatic phrase, are in anyway credible. Instead, from the very outset the notion of election fraud was deemed non-credible by the media’s gatekeepers.

As it turned out, according to retired Lt.-Gen. Thomas McInerney, the Kraken refers to a clandestine US military intel group that broke into a Germany-based server farm belonging to Dominion, the company that provided many of the voting machines in the US presidential election. This unit, so claims Mclnerney, provided Trump, Giuliani and Powell with enough data to substantiate the claims of a rigged election, enough to file credible lawsuits. This too is a big story that the media should have followed, and maybe it did in the US, but not in Israel.

Israelis who rely on the major Hebrew media outlets to provide them with an unbiased picture of what is going on with President Trump’s allegations of a rigged election will hear little, if anything at all. Searching the Internet yields surprisingly poor results, most of which are off-hand dismissals of election fraud.

The following is a taste of what Israelis hear about the election fraud drama.

Following the November 19 press conference of Giuliani and Powell, the daily Haaretz published a piece (first published by The Guardian and The New York Times) in which the headline said it all: “In attempt to claim election fraud, Trump’s lawyers find it hard to provide evidence”. The subtitle, which in many cases is as far as readers would go, adds that Giuliani “presented a string of strange claims (about which) a legal expert (says it projects) negligence and lack of seriousness.” 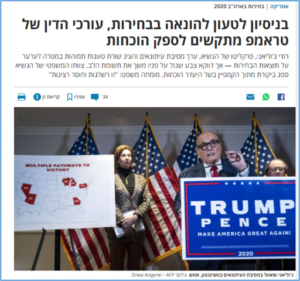 The popular Ynet news portal’s focus on Sidney Powell’s being dropped from Trump’s legal team is similarly biased. The headline alerts readers that the legal team cut Powell loose because her “claims were far too weak.” The summary of the article says that Powell, as well as the rest of Trump’s legal team, were “pushing baseless conspiracy theories.” 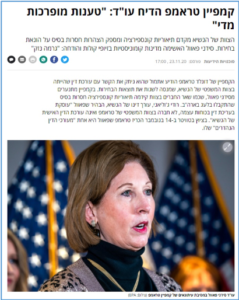 Walla’s take on the same story of Powell’s removal from Trump’s legal team is just as one-sided as that of Ynet and Haaretz. The subtitle reads, “U.S. President has described Sidney Powell as one of his ‘wonderful’ team, but after a line of bizarre claims even for his campaign, it was announced that she is operating independently.” Walla continues with “Giuliani, who himself promotes bizarre conspiracy theories about election fraud.”

And as for the Kraken, aside from social media, the only one I have seen to mention it is GPlanet, a private webpage run by media commentator Guy Bechor. What this means is that if Israelis would like to learn more about the Kraken affair, they will have to search for it on social media or esoteric outlets like GPlanet, that uncritically accepts the “conspiracy theory” of Trump’s legal team. Bechor’s headline from November 25 reads, “The biggest election fraud in history: Good news for the difficult struggle of President Trump. Releasing the Kraken?” 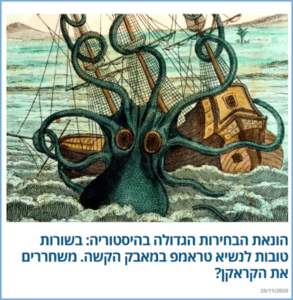 The gaps left by poor media coverage, that should rightly be considered misleading, are filled in by Israeli Trump supporters, some of whom are providing surprisingly good information, along with commentary one can ignore at will. One of them is American Israeli Joe Zevuloni, who, as of December 6, excitedly informs his Facebook followers that 75 Pennsylvania congress members have signed a statement saying they will not support (Biden’s) electors. Though most Israelis don’t have the faintest idea who this Kraken is, or what 75 congress members means, at least those who want to know are made aware that there is more to Trump’s claims than what the Israeli media is willing to say.