Ukraine President Volodymyr Zelensky finally got his chance to directly address Members of Knesset and the Israeli public on Sunday, but it didn’t go over very well.

While Zelensky has taken a conciliatory and pleading tone in similar addresses to other parliaments and to the US Congress, he was far more combative in speaking to Israel.

Zelensky wants Israel to explicitly condemn Russia, join Western sanctions against Moscow, and provide Ukraine with military equipment, as many other Western nations have done.

From the perspective of Israel’s government (and putting aside all other considerations, such as maintaining freedom of operation in Russian-controlled Syria) mediating a ceasefire will save far more lives than providing Ukraine with the weapons needed to fight on, even if it fails to fully protect Ukrainian sovereignty.

In this light, Israeli leaders believe they are actually doing more to save Ukraine than any other nation.

In a speech riddled with Holocaust references, Zelensky criticized Israel for in his estimation doing far too little to help Ukraine fight the Russian invaders.

“The Russians use the terminology of the Nazi party, they want to destroy everything. The Nazis called this ‘the final solution to the Jewish question,’” he said. “And now… in Moscow… they’re using those words, ‘the final solution.’ But now it’s directed against us and the Ukrainian question.”

“I’m sure you feel our pain, but can you explain why we’re still waiting… for your help… when other countries are giving help? Why isn’t Israeli help, or even entry permits, forthcoming?” continued Zelensky. “What is it? Indifference? Political calculation? Mediation without choosing sides?”

In conclusion, the Ukrainian leader stressed: “I’ll leave you to provide the answers to these questions, but I want to point out that indifference kills. Calculations can be wrong. You can mediate between countries, but not between good and evil.” 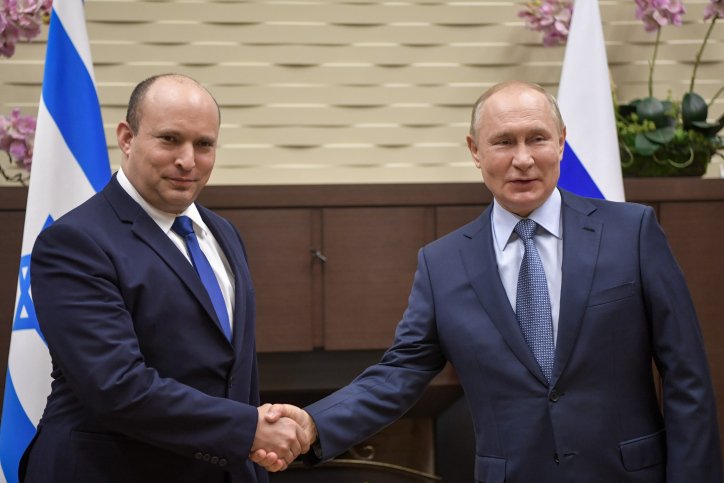 Israeli government ministers weren’t impressed, and panned the Ukrainian president for what they called his “blunt and exaggerated” criticism. They were particularly unsettled by Zelensky, who is Jewish, repeatedly invoking Holocaust imagery to shame Israel into action.

The Ynet news portal quoted one senior government official as slamming Zelensky for referencing the Holocaust when so many Ukrainians had actively aided the Nazis in their efforts to exterminate local Jews.

In a response posted to Twitter, Communications Minister Yoaz Hendel noted that while he “admires the Ukraine president and supports the Ukrainian people in heart and deed, the terrible history of the Holocaust cannot be rewritten. …This war is horrific, but the comparison to the horrors of the Holocaust and the final solution is outrageous.”

The Ukrainian leader also earned the ire of figures in the Likud-led opposition.

Zelensky is trying “to rewrite history and erase the involvement of the Ukrainian people in the extermination of Jews,” charged far-right MK Bezalel Smotrich (Religious Zionism).

“War is always a terrible thing,” wrote Steinitz in his response to the speech, “but every comparison between a regular war, as difficult as it is, and the extermination of millions of Jews in gas chambers in the framework of the Final Solution is a complete distortion of history.” 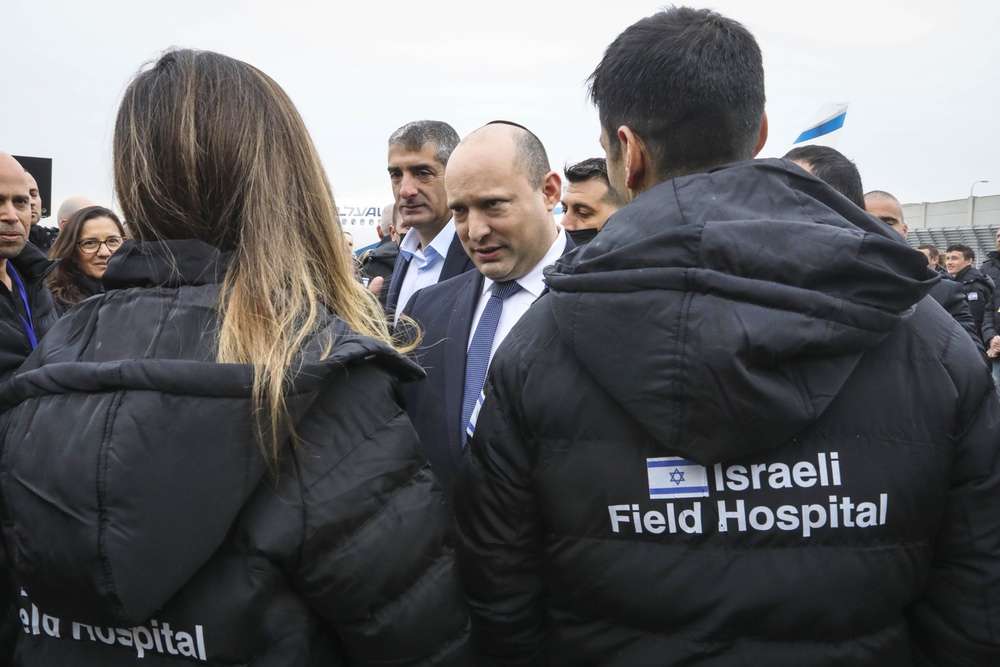 Has Israel done more than others?

Prime Minister Naftali Bennett was more diplomatic in his response, but also clearly disagreed with the notion that Israel hadn’t done enough to aid Ukraine in its hour of need.

“Israel has been stretching out its hand to aid in the crisis in Ukraine for several weeks, from the first minute in different, varied channels. We are managing this unfortunate crisis sensitively, generously, and responsibly while balancing the different considerations – and they are complex,” said Bennett during a send-off ceremony for an Israeli field hospital to be established in Ukraine.

The Israeli leader added: “I want to say clearly that Israel and the Israeli public can be proud of the aid and contribution to the citizens of Ukraine. Be proud of the actions Israel has taken…There are not many countries who have done as much.”

Officials in Jerusalem later stressed that impassioned as it was, Zelensky’s speech would not alter Israel’s current policies on the Russia-Ukraine war.

Aware of the displeasure in Israel, Zelensky later that night issued a more placatory message, thanking Bennett for his ongoing mediation efforts, and reiterating that he sees Jerusalem as the place to hold ceasefire talks.

“The prime minister of Israel, Mr. Naftali Bennett, is trying to find a way of holding talks. And we are grateful for this. We are grateful for his efforts, so that sooner or later we will begin to have talks with Russia, possibly in Jerusalem. That’s the right place to find peace. If possible,” said Zelensky in what has become a nightly video address from Kiev. 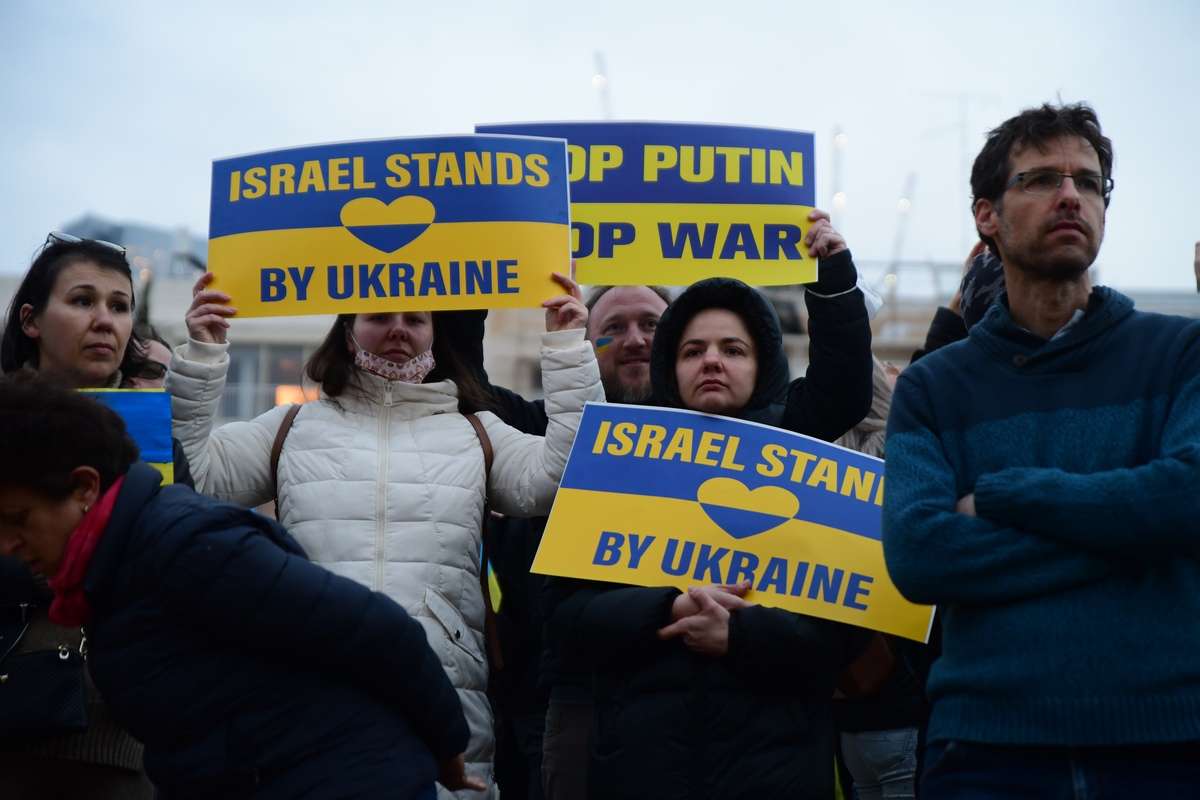 The Israeli pubic by-and-large stands with Ukraine, and many want to see their government do more to aid Kiev. Zelensky’s impassioned plea was primarily meant for their ears. Photo: Avshalom Sassoni/Flash90

Attempt to stir the public?

Conservative Israeli media commentator Amit Segel noted that the tone of Zelensky’s speech made it clear he wasn’t speaking primarily to members of Knesset, but rather to the Israeli Jewish public.

Public opinion in Israel has been overwhelming on the side of Ukraine, as evidenced by ongoing protests outside the Russian Embassy in Tel Aviv.

Perhaps Zelensky hoped to stir the public against the current policies of Bennett and his government, even if that means forgoing Israel’s role as a viable mediator.

But given the fragility of Israel’s ruling coalition, there’s more at stake than just sacrificing Jerusalem’s image as an unbiased arbiter. On a number of sticky policy issues, Bennett’s unity government is holding on by the narrowest of margins. Urging the Israeli public to oppose its policies on Ukraine could be the straw that breaks that camel’s back.

Of course, from Zelensky’s point of view, there’s simply no choice left but to pull out all the stops.