The dramatic Russian invasion of Ukraine has sparked outrage throughout much of the world and has produced a whirlwind of misinformation regarding what exactly is taking place on the ground.

That being said, what’s Israel’s position regarding this conflict? How should its strategy be defined?

Although much of the current war can be understood through the centuries-long history of conflict between Ukraine and Russia, the causes are much broader. This is a clash between the East headed by Russia and the West led by the United States and its allies, a scene reminiscent of the Cold War. One of the central sources of this conflict is great power competition in which Vladimir Putin is seeking to raise Moscow once again on the pedestal of great power politics and prevent Western influence from spreading Eastward toward its border.

Israel is currently facing a dilemma in which on the one hand it is under pressure to denounce Russian aggression and implement harsh measures along with the West, while on the other Israel does not want to cross a red line with Putin in order to protect its own interests at home.

This is familiar territory for the Jewish State.

Israel has throughout its history faced a balancing act when it comes to great power competition. This was most notable during the Cold War.

During the first few decades of Israel’s independence, Jerusalem sought to remain as neutral as possible. The nascent Jewish state needed strong relations with the United States in order to receive its influential political and financial support. Moreover, living in the United States was the largest and most affluent Jewish community in the world.

However, there were also large Jewish communities living in the Soviet bloc beyond the Iron Curtain. Not only were they significant in number, but in contrast to Jews living in the United States, they were living under difficult conditions making them prime candidates for Aliyah. Thus, so long as Jews were still living in the Soviet Union, it was a primary strategic interest for Israel’s leaders to preserve a working relationship with Moscow and its allies. Highlighting this in 1950 was Israel’s first Prime Minister David Ben-Gurion, who stated: “So long as there is still a chance of getting Jews out of the countries behind the Iron Curtain,[Israel] cannot become part of the Western Bloc.” As a result, Israel could not always fall in line with Western directives.

The current crisis appears to bear significant resemblance to Israel’s position during the Cold War.

The United States is Israel’s foremost ally, and provides our military with excessive funding and weaponry, as well as political backing in international forums. Although it appears that the US has not requested that Israel take particular measures against Moscow such as economic sanctions, but it is pressuring Jerusalem to join the Western democracies in denouncing Russia’s military operation in Ukraine. 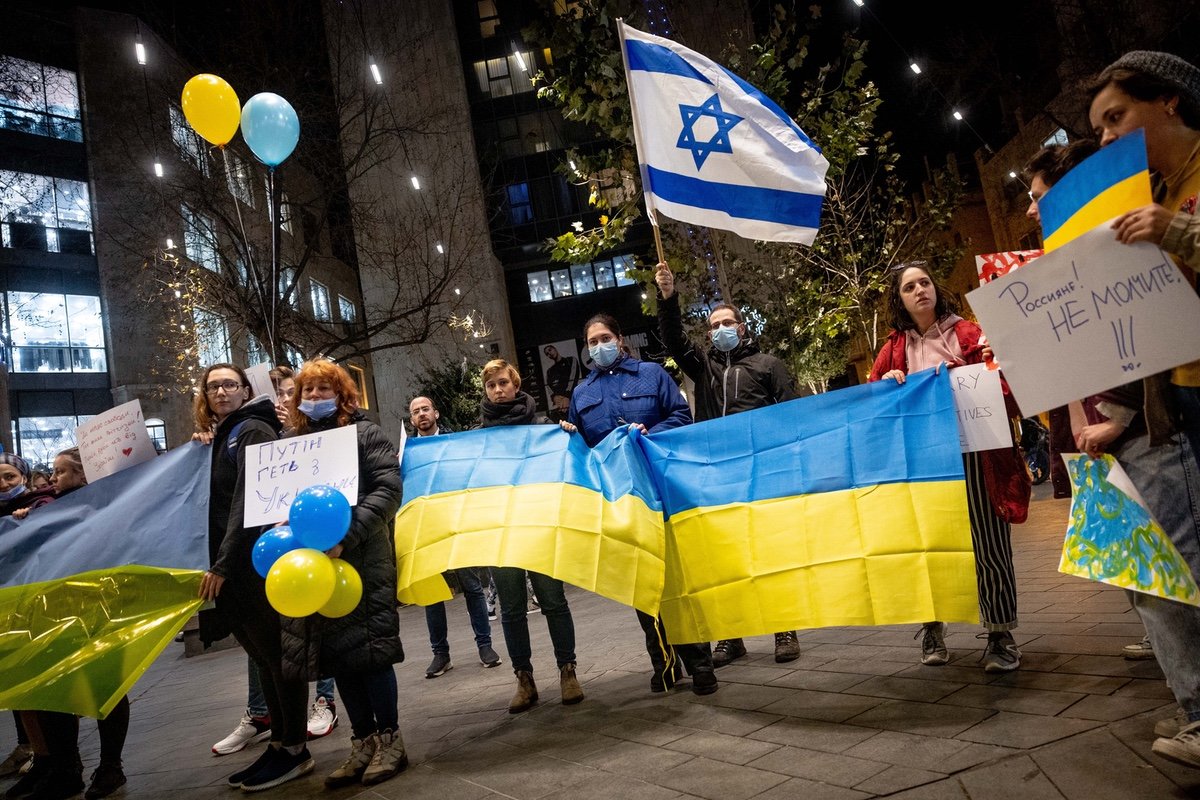 Demonstration in Jerusalem. Israelis support Ukraine against Russian aggression, but their leaders must take a more nuanced approach to the crisis. Photo: Yonatan Sindel/Flash90

At the same time, Israel must preserve its delicate relations with Russia in order to protect its immediate interests at home.

Israel faces a serious threat in its own backyard – Syria. Syria serves as a base from which Iranian proxies seek to develop military capabilities that can harm Israel just meters from its territory. Syria is also used by Iranian elements to transfer missiles to the terrorist organization Hezbollah in Lebanon. Russia has been present in Syria since its civil war began, and thus determines who can operate in its airspace. Therefore, it is critical to its security that Israel preserve its almost complete freedom of action to neutralize threats across its northern border.

The first official reaction by the Israeli government was heard on Thursday from Foreign Minister Yair Lapid. He condemned Russia’s invasion and deemed it “a serious violation of international order.” He then added what Israel is willing to do—“Israel stands ready to provide humanitarian aid to Ukraine.”

On the one hand, Lapid showed Israel’s loyalty to the West by clearly denouncing Russia’s actions in Ukraine. On the other, he clarified that Israel will not join the sanctions being imposed on Moscow and that its action will be limited to humanitarian aid.

However, even this may have been a step too far for the Kremlin.

Shortly after this address, Moscow jabbed back at Israel. Russia’s representative to the United Nations, Dmitry Polyanskiy, denounced Israel’s “occupation” of the Golan Heights, expressing Moscow’s “concern over Tel Aviv’s announced plans for expanding settlement activity in the occupied Golan Heights, which contradicts the provisions of the 1949 Geneva Convention.”

This may explain the carefully chosen words of Prime Minister Naftali Bennett and Minister of Finance Avigdor Liberman later in the day.

In contrast to Lapid, Bennett abstained from denouncing or even mentioning Russia in a speech he delivered at an IDF officers training course commencement ceremony. Instead, he simply emphasized that Israel is willing to provide humanitarian aid to the people of Ukraine. Liberman followed this stance and added that “the smartest thing to do is keep a low profile.”

It is possible that both of them refrained from directly denouncing Russian aggression and merely offered humanitarian aid in order to strengthen Israel’s stance as neutral. Unfortunately, Israel cannot afford to lose its freedom of action in Syria. Therefore it must do what it can to provide all the aid that it possibly can to the Ukraine, while remaining steadfast in keeping its eye towards the immediate threats it faces on a daily basis.