Israeli human rights activists gathered outside a prison in northern Israel this week to demand the release of a female Palestinian terrorist who is just days away from giving birth.

Anhar Al-Deek, 25, has been in Damon Prison outside of Haifa since March of this year. She was already pregnant at the time of her arrest.

As Al-Deek’s due date has neared, her plight has become one of the major topics on Arabic-language Palestinian social media. The hashtag “Save Anhar Al-Deek” is trending as Palestinians decry what they see as the barbarity of jailing a pregnant woman.

Given the circumstances, some Israeli human rights activists see Al-Deek as a “political prisoner, and insist that their government set her free, regardless of her crimes. 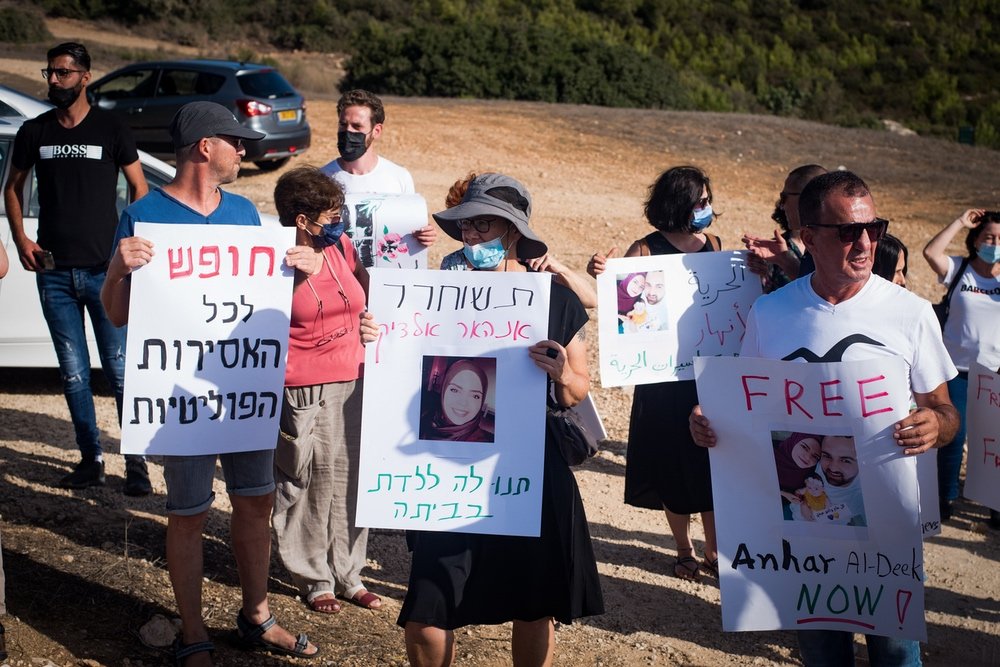 The signs label Al-Deek as a “political prisoner,” which is misleading, to say the least, considering she tried to kill someone.

What did she do?

Dubbing Al-Deek a political prisoner might be overly generous. She was arrested on March 8 for attempted murder.

That same day, the young pregnant Palestinian woman entered a Jewish farmhouse in Samaria (near the Palestinian town of Ras Karkar, not far from Modiin), grabbed a long kitchen knife, and threatened the owner of the house, Leah Ze’ev, and her two young children.

The older daughter, aged eight, managed to flee the house on her own. Leah, keeping her distance from Al-Deek, managed to grab her one-year-old daughter and also run out of the house while calling for help.

Leah’s husband, Eitan Ze’ev, quickly arrived with his brother, and the two subdued Al-Deek at gunpoint while waiting for the authorities to arrive.

A baby in prison?

The last time a female Palestinian terrorist gave birth in an Israeli prison was back in 2008.

An Israel Prison Services spokesperson responded to the uproar surrounding Al-Deek by insisting she’d be treated like any other pregnant detainee. When the time comes, she will be transferred to an Israeli hospital and give birth under normal circumstances, with prison guards posted outside the room.

If Al-Deek is convicted, she will be permitted to keep her newborn with her in prison for up to two years. “The Israel Prison Services is prepared and ready to deal with these situations,” said the spokesperson.