Today’s Hebrew word is “Ra’anan.” It means fresh/green/verdant/luscious. It appears in the Bible in Psalm 52:8. It’s also the name of the trendy, affluent town where Prime Minister Naftali Bennet lives – the Tel Aviv suburb of “Ra’anana.”

Some of you who live in lands with abundant rain throughout the year will perhaps need to stretch to perceive how special the simple color of green is, to those of us in dryer pastures…

As anyone who has been to Israel in the summer knows, the Holy Land is very dry, yellow and dusty for most of the year. It takes the “early rain” and several encores in the late Autumn after the Feast of Tabernacles before the seeds are convinced and send forth tentative green sprouts some time each December. Then we get a few precious months for our eyes to bathe in green Israeli vistas.

Every year I promise myself that THIS year I will conscientiously and intentionally pull the family out of the house on weekends to enjoy the green springtime. We think of it as little trips to the emerald isle or the green Scottish highlands.

So when Purim presented a day off, and with our third son just days away from being drafted into the IDF, we launched out in our aging jeep, ooh-ing and awe-ing as we drove around the northern end of the Sea of Galilee and climbed half way up the Golan Heights. The traffic was deliciously sparse. After two wrong turns, we finally found the dirt road that would lead us to a convergence of two streams (El-Al and Semech). In arid Israel, even one running stream is an occasion for gawking. So two in one stroke is almost unheard of. 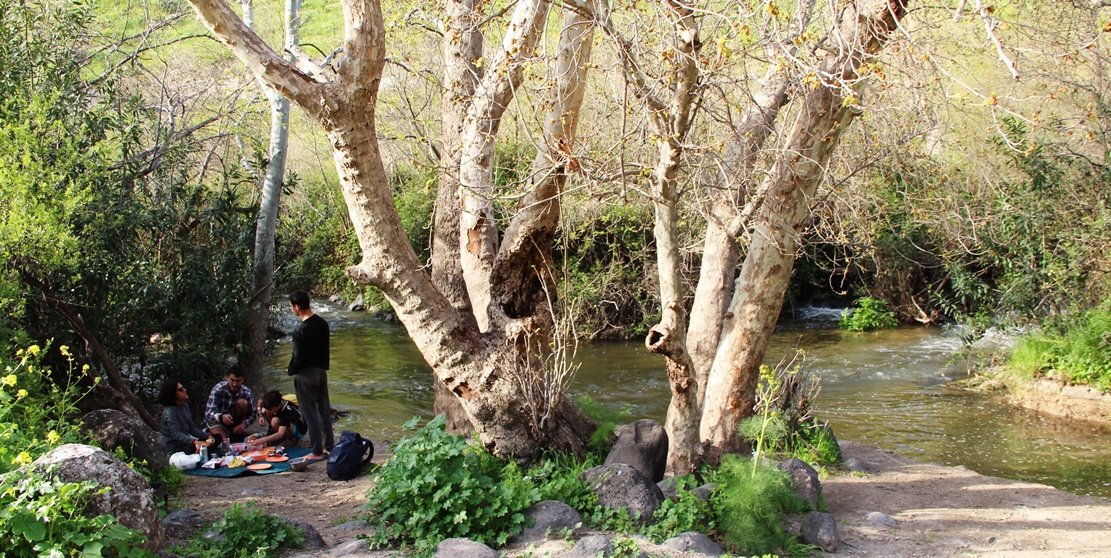 One swiftly-flowing stream is a rarity in this land. Two in one location? Nearly unheard of. Photo: David Shishkoff

As Israel Today reported, this winter and spring have been blessed with abundant rains. So the dirt road, that looked so short and straight on the map, turned out to have several muddy ponds about half way to the H2O rendezvous. We left the vehicle just before the epic mud sections and continued by foot. After all, exercise is a good thing. Again those innocent-looking elevation lines on the topographical map proved to be ornery. The trail got steeper and steeper. Eventually we heard the sound of rushing water so unfamiliar and rare to our ears. I stopped every few minutes to try to capture the luscious green hills with my camera, empowered by the thought that I could publish a few shots for your viewing pleasure. 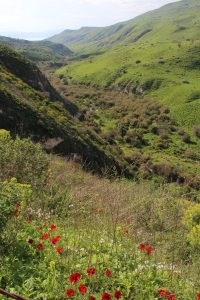 The greenery this time of year is stunning, but won’t last long. Photo: David Shishkoff

As we meandered along the western side of the Golan Heights in blissful tranquility, we completely forgot that just 12 km (7 miles) away, on the eastern side of the Golan Heights, ravenous “lions” are crouched, hoping to pounce – Hezbollah and Iran to name a few. These past few days we also learned that the Russian military activity on that same Syrian-Israeli border may be becoming more blatant. All of this can easily conjure up Biblical language of a constellation of enemies preparing to attack the “mountains of Israel” from the north.

But for several hours we simply enjoyed the green, green grass on “our” side of the fence. And indeed the relative peace and prosperity in the Land of Israel is not to be taken for granted. Reminds me of another verse in the Psalms. “… He makes me lie down in green pastures. He leads me beside still waters. He restores my soul.”