Right before Hanukkah begins this year, Americans will be celebrating Thanksgiving, which is a holiday that commemorates the Pilgrims arriving in the New World and sharing their first harvest meal with the Native Americans, after so many Pilgrims who fled England due to religious persecution in the 17th century arrived in America only to perish in the winter cold.

On this occasion, Americans generally express their gratitude to God for saving them both from the religious persecution that the Pilgrims experienced and from other tribulations.

Americans every year generally celebrate this holiday by eating a gigantic turkey with stuffing, corn on the cob, corn muffins, cranberry sauce, pumpkin pie, apple pie, and other delicacies. While Jews refrain from marking some other holidays that are connected historically to Christianity, this is not the case with Thanksgiving.

This is because America’s First President George Washington avoided using “Christian” language when he designated November 26th to be Thanksgiving, thus signifying that the holiday should include all Americans and not just Christian Americans. Rabbi Moshe Feinstein and Rabbi Joseph Soloveitchik, two leading 20th century Orthodox legal authorities, both agreed that Thanksgiving was a secular American holiday, similar to the Fourth of July.

Many of the central themes of the Thanksgiving holiday resonate with Jews across the globe. Just as the Pilgrims fled religious persecution in England, many Jews are descended from refugees who fled antisemitism in Europe, Latin America, and the Middle East. A holiday that promotes the right to religious freedom and being grateful to God for one’s survival has great significance for the Jewish people. 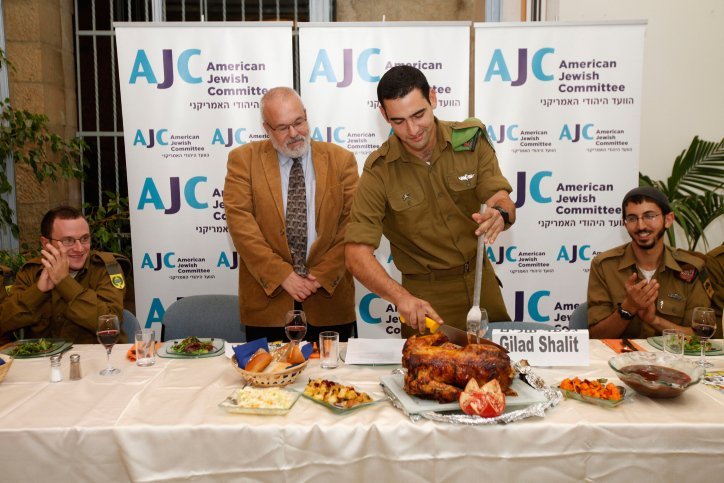 As Psalms 100 proclaims, “A song of thanksgiving offering. Shout to the Lord, all the earth. Serve the Lord with joy, come before him with praise. Know that the Lord is God; he made us, and we are his people and the flock of his pasture. Come into his gates with Thanksgiving, into his courtyards with praise; give thanks to him, bless him. For the Lord is good; his kindness is forever and until generation after generation is his faith.”

Indeed, giving thanks to God and to our fellow human beings is an important Jewish value. As Rabbi Shalom Arush, author of The Garden of Gratitude, noted: “For years already, I have been expounding and explaining more and more new aspects of ‘todah’ – saying thank You to G-d, and truly appreciating everything in our lives – from every part of our body that functions, to every item we own and use throughout the day, to the big aspects of our lives like our families, jobs, etc., and even for the things in our life that make us suffer – be it physical things like difficulties with earning a living, or spiritual things like lusts, bad character traits, or just not serving Hashem the way You want.”

According to him, “Throughout all this time, I have explained the importance of saying thank You for everything, including specifically the “bad” in our lives, for at least 30 minutes – one half hour – every single day. I also explained the importance and power of saying Psalm 100 – Mizmor L’Todah. Many people have also seen miracles writing 18 or 40 new thank You’s every day, and I recommend writing 100 thank You’s a day, in order to fulfill the words of Arizal to say 100 blessings a day.”

Rabbi Nachman of Breslev teaches that Hanukkah is the Jewish Thanksgiving, as the main function of the holiday is to sing praises to God for saving the Jews from Seleucid Greek persecution, just as Americans sing praise to God for sparing the Pilgrims in the 17th century. Thus, both Thanksgiving and Hanukkah are celebrated well in unison, as both holidays have similar themes.

Chabad teaches that “our gratitude to G-d must express itself in the actions of our daily life.” In other words, it should not be confined to one day like Thanksgiving, but rather expressed at every moment from when we rise in the morning until when we go to sleep in the evening. Every day should be a Thanksgiving in Judaism.

Therefore, Judaism teaches that we must pray and say “thank you” to God three times each day when we do the Amidah prayer, or “standing prayer” central to Jewish liturgy. In the Amidah prayer, Jews should not just pour out to God what their heart desires, but they must also thank God for the simple things that they were blessed with, such health, security, sustenance, etc.

Additionally, Jews must pray both before and after meals. This is because there are people in the world who are not fortunate enough to have food on their table in abundance. So, we should thank God for every meal we have. In fact, there are even basic blessings of gratitude in Judaism where one blesses simple things, like a glass of water. After all, there are enough parts of the world that are experiencing drought or where the sanitation is so poor that a glass of clean drinking water is something dear enough that we should all express gratitude every time we drink a glass of water.

Especially during the COVID-19 pandemic, everyone should express gratitude for what they have, for just being alive and healthy at a time when over five million people across the world have perished from the coronavirus. If one was fortunate enough to travel during the pandemic, one will begin to understand how much Jewish Israelis should be grateful for what they have, for they had it good compared to many other parts of the world. No one should take their blessings for granted and this is the main message that we all should consider this Thanksgiving.