Whoever visits the Golan Heights today, and has been there before, will notice that after the conquest by Israel 55 years ago, little has changed.

The other (26,500) inhabitants of the Golan Heights are Druze or Alawites (2,000). It is the only region in Israel where no Arabs live.

The Jews of the Golan Heights live in four predominantly small towns, 18 moshavim, and 10 kibbutzim.

A large part of the Golan lays fallow

Much of the territory captured from Syria is still fallow and only beef cattle graze in these areas.

There are also parts of the Golan Heights that are still inaccessible due to the landmines that were placed prior to the Six-Day War.

One can still see destroyed and damaged buildings and mosques left behind by Syria during the 1967 drama.

That situation will now come to an end if we are to believe Israel’s Prime Minister Naftali Bennett.

Bennett’s cabinet held a special meeting in Kibbutz Mevo Hama on the Golan Heights last Sunday, and the prime minister announced that his government will be pumping a huge sum of money into the area.

In addition, two new villages (Asif and Matar) will be built with a total of 4,000 apartments. One hundred and sixty million shekels (more than $50,000,000) will be spent on improving roads and public transport, while 162 million shekels have been set aside for regional development, including tourism.

About 2,000 jobs will be created in the tourism industry, agriculture, hotels and the commercial sector.

The rest of the money will be used to turn the Golan Heights into Israel’s green energy capital. Today, there are only a handful of windmills in the area and that will soon change according to Bennett.

There will be large-scale solar energy projects covering 200 hectares. 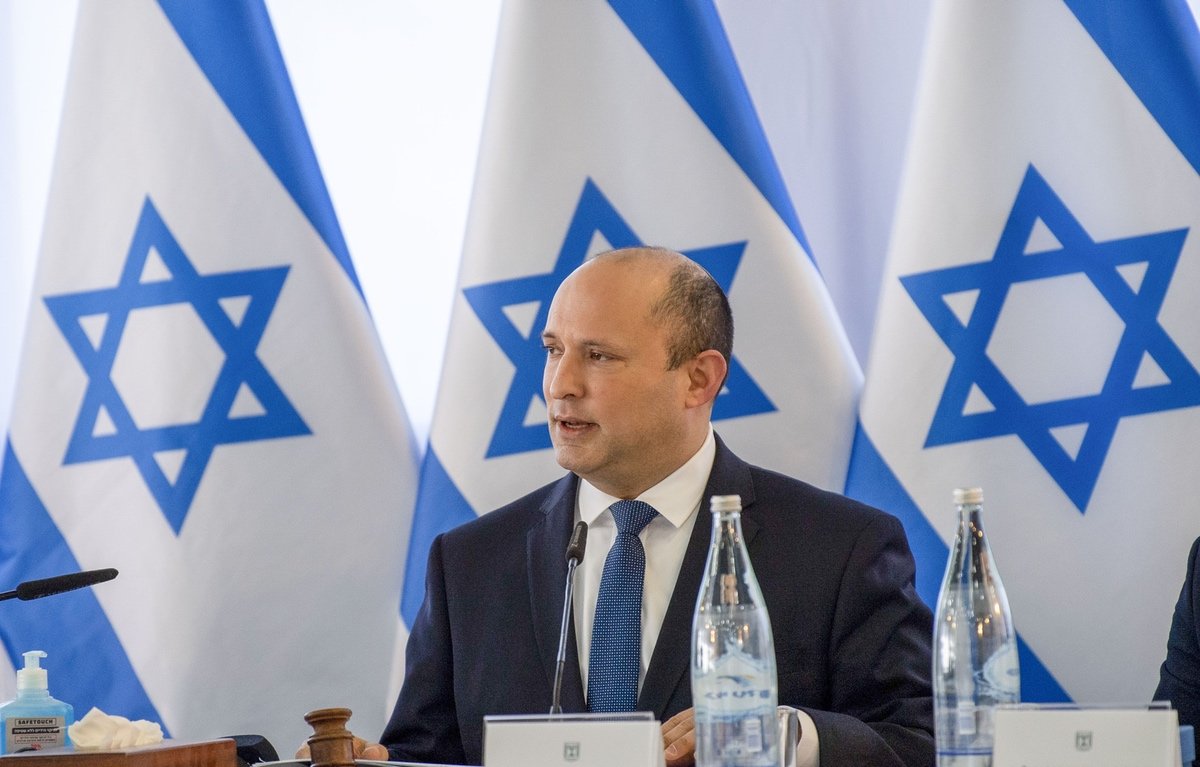 Bennett’s got big plans for the Golan. Photo: Gil Eliyahu/POOL

Bennett gave a speech in which he proudly presented the plan.

Below are excerpts of the speech Bennett delivered on Sunday:

“Friends, this is our moment; this is the moment for the Golan Heights. A combination of circumstances has led us today to a dramatic government decision to channel considerable resources, around NIS 1 billion, to strengthening communities on the Golan Heights.

“First, it must be said, the Golan Heights are Israeli; this is self-evident. Israeli law has been applied to them since 1981 and they are beyond all debate.

“The fact that the Trump administration recognized this, and the fact that the Biden administration has made it clear that there has been no change in this policy, are also important. After around ten years of terrible civil war in Syria, every knowledgeable person in the world understands that it is preferable to have Israeli heights that are quiet, flourishing, and green as opposed to the alternative.

“Moreover, in the past two years, many Israelis have discovered that it is possible to work from home and that it is not necessary to live in the center of the country. In this context, the Golan Heights can be a wonderful option for whoever wants clean air, space, and quality of life. Several minutes ago, I saw children in the kindergarten here and there is what to be envious about.

“Here is where our government comes into the picture. The plan that we will approve today marks 40 years since the law was applied and – truth be told – is years overdue. For many years, the scope of community life has stagnated. We have a major gap to close and we are starting to do so today.

“I would like to be clear: After many static years regarding the scope of community life, our goal today is to double the population of the Golan Heights. To this end, we will strengthen the city of Katzrin with two new neighborhoods, the 12 and 13 quarters.

“To this end, we will establish two new communities on the Golan Heights, Asif, and Matar. We are increasing community life here.

“For this, we are allocating considerable resources and I would like to thank all of the government ministries. Approximately NIS 1 billion will turn the Heights into a place that is good to live in.

“Of this money, more than NIS 500 million is for planning and housing. NIS 162 million is for regional development – tourism, industry, commerce, everything that creates good jobs here. Another NIS 160 million will be for improving the quality of life – transportation, medical care and other aspects of life.

“The Golan Heights will be very green in one sense and, in effect, will become the technological capital of renewable energy in Israel. I would like to thank the Energy Minister in this context.

“I would also like to say something that is very important to me personally and I think also contributes to the resilience of the State of Israel.

“The fact that the ministers of the government are here, from the right and left, sitting together here, is very impressive. It is not a given.

“Our government, by its very establishment, allows us to find the Israeli national consensus anew. After many years in which we constantly focused on what divides us, we are trying to emphasize here what unites us.

“The Golan Heights, the need to strengthen, cultivate and live in it, is certainly a principle that unites everyone here.

“And to the Israelis who are looking for a place to build their home, I say – the Heights are waiting for you; come to the Golan.” 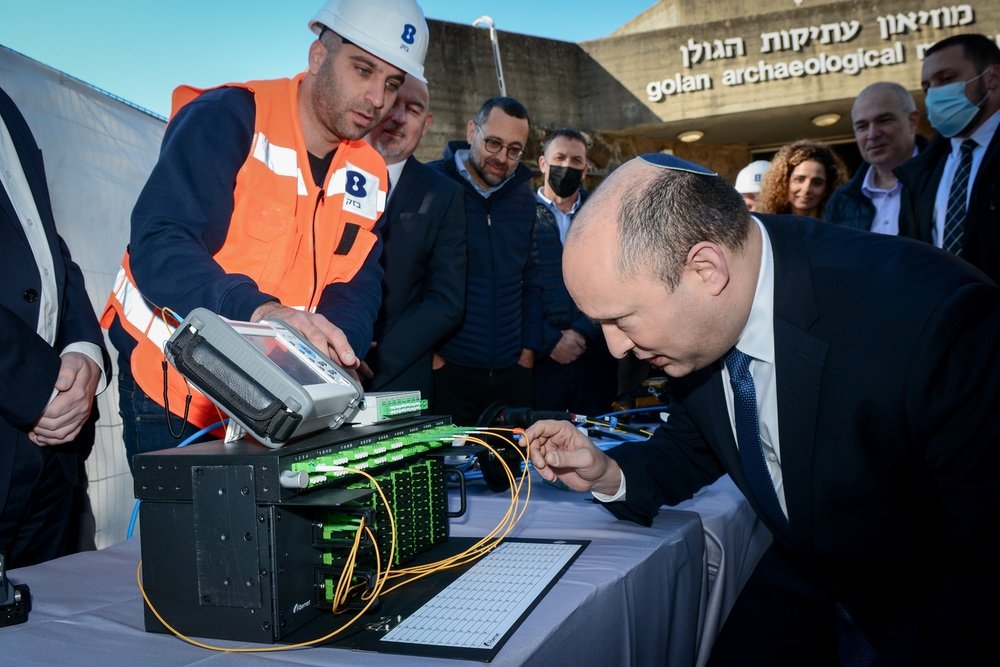 Until now many Israelis only come to the Golan to enjoy a vacation, hike, or ski on Mount Hermon in the winter.

The lack of housing and jobs was the main reason that Israelis didn’t choose the Golan as a place to live.

The overcrowding in central Israel forced the government to take drastic steps, however, and the development of the Golan Heights is one of them.

The other measures are the further development of the Galilee and to populate the Negev desert, something the first Prime Minister of Israel, David Ben-Gurion already envisioned.

Bennett’s words aroused great anger in the regime of Syrian President Bashar al-Assad, but the dictator will no longer be able to start a new war with Israel on this issue.

“The Syrian government reaffirms its permanent and strong support for its Syrian citizens, the people of the occupied Syrian Golan who resist the Israeli occupation and who reject the annexation decision and the policy of seizing lands by force,” a Syrian Foreign Ministry statement later said.

Assad’s outcry over Bennett’s words is hypocritical, however.

The Syrian dictator is not even able or unwilling to rebuild the destroyed cities, towns and villages in Syria. Unwilling because most of these places were populated by Sunni Muslims before the civil war started in 2011 and most of those Sunni’s still fight against the regime.

As a result of Assad’s policies, more than half of the 22 million Syrians who populated the country before the civil war remain refugees status both inside Syria and abroad.

Israel has always made clear that it will not vacate the Golan Heights because the plateau is vital for the defense of the Jewish state.

Before the Six-Day War in 1967 started, Syria terrorized Israeli communities along the border with Israel that at the time was a few kilometers away from the shores of the Sea of Galilee.

Since the Yom Kippur War of 1973, the Israeli border with Syria has remained one of the quietest, until Iran started to provoke Israel with missile and drone attacks in the second half of the 10-year-old internal Syrian conflict.