(JNS) As European and American negotiating teams continue to convene in Vienna in an attempt to sign a new nuclear deal with Iran, the Iranian people have taken to the streets to protest the rising cost of living. Food and gasoline prices have risen, and clean water is scarce.

Unemployment is high, and prices of goods have skyrocketed. Western media outlets will have readers believe that Iran’s economy is tanking due to United States-led sanctions only, but there is more to the story; in fact, one group of Iranian-born activists is on a mission to ensure it is heard.

Last month, the Shoshana Mission—a delegation of Iranian-born academics, lawyers, journalists and activists living in the United States, the United Kingdom and Germany—visited Israel for 10 days to create awareness for their cause, which is to topple the Iranian regime and ensure a free, democratic and secular Iran.

The delegation held formal meetings with senior Israeli officials and civil society leaders. Among others, they met with Alex Selsky of the Israeli Victory Project, expressing support for its goal to resolve the Israel-Arab conflict by convincing Palestinians that the Jewish state is here to stay.

The mission was organized by Zohreh Mizrahi, president of the Persian American Civic Action Network (PACAN). She emphasized that they do not want help from the international community to bring about regime change. That, she said, the Iranian people can do on their own.

What the group is asking, she said, is for the international community and the media to “cease censorship, bias, favoritism and appeasement of the Islamic Republic.”

Mizrahi told JNS that the only country “consistently speaking against the Islamic Republic is Israel. We need to change that.”

She also noted that while the regime and its leaders project an image of being spiritual and holy, nothing could be further from the truth.

“The tolerance by Western governments not to say anything against religion is giving the regime power to present this false narrative,” she said. “We want to change that. We want to tell the world that they are not faithful Muslims. They are hypocrites. They are desanctifying the cloth and religion to destroy Iran. They do not have any sense of nationalism. They don’t care about the Iranians.”

Mizrahi noted that now the mission is “focusing on creating unity, an alliance, among friends.”

According to her, while Israel has consistently been on the side of Iranians, many other countries have not. With the Abraham Accords seeing so much success, the group has been pursuing support from the agreement’s partners, including the United Arab Emirates and Bahrain.

She called on Israel’s media to create a stronger focus and provide better coverage of what is happening today in Iran. In her view, if the media in Israel and in Western countries can get on board and start highlighting the protests in Iran, as well as other activities by opposition groups, the Iranians could bring about change.

“Regime change has to come from inside Iran,” she said. “It has to be the will of the Iranian people. It is happening as we speak.” 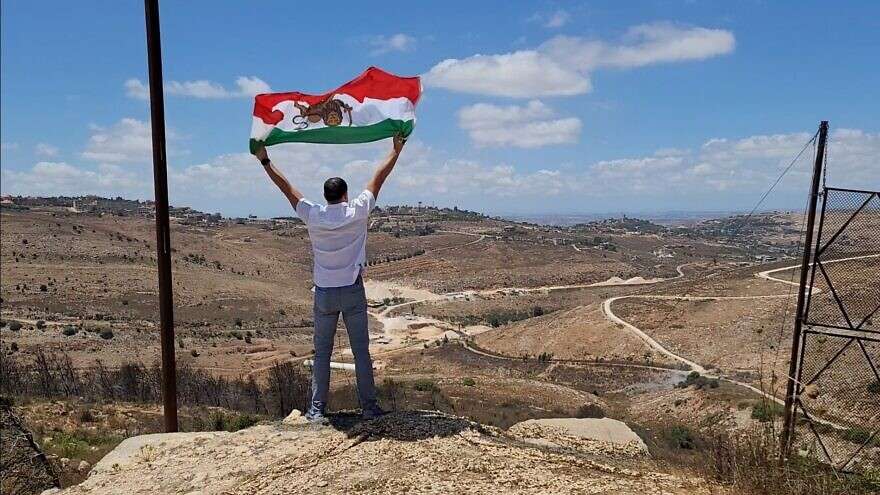 Ahmad Batebi, an Iranian non-Jewish activist and journalist waving the “Sun and Lion” Iranian flag that was used during the Pahlavi dynasty, in Israel, August 2021. Credit: Courtesy.

‘A cult, a mafia, a cartel organization’

Iran is crumbling at the seams; society is fed up. A collapsed building in May in the southwestern Iranian city of Abadan resulted in 31 dead. Protesters took to the streets of the city, angry over shoddy construction and enforcement. The city’s rage has caught on across Iran; at a recent soccer match, thousands of Esteghlal FC national soccer team fans chanted “Abadan, Abadan.”

But the regime has long ignored the needs of the Iranian people and instead is focused solely on enriching its stockpile of uranium closer to weapons-grade levels as it threatens the United States and Israel with annihilation.

Amir Hamidi, former US attaché in the UAE, told JNS the regime is “dangerous not only to the Iranian people but dangerous to the region, including Israel.”

He said the Iranian regime is “a cult, a mafia, a cartel organization.”

“It is time that the United States, European Union and Middle Eastern countries realize this before it gets too late,” he added.

Nazenin Ansari, the editor of the London-based Persian-language weekly online newspaper Kayhan Life, spoke of Iran’s 2009 Green Revolution, during which thousands of Iranians poured into streets across the country to protest the regime.

Ansari told JNS that had former President Barack Obama paid closer attention and acknowledged that, instead of the empty promise like the red line he said he would not allow Syria to cross if it used chemical weapons (which it subsequently did), “they would have succeeded.”

The group sounded hopeful that change in Tehran can be achieved, even after so many years of fighting for it.

Asked who they would want to see as a logical replacement for the regime, the group said only one name has come up, polling at more than 30%, and that is Reza Pahlavi, the oldest son of the former Shah Mohammad Reza Pahlavi.

Still, they insisted, this could only happen if the world understands the domestic situation within Iran. As long as the Iranian public sees that the world supports them, they will have the hope and motivation to continue their fight against the regime.

“We want coverage of whatever is happening in Iran,” said Mizrahi. “I believe change is going to happen.”