Likening the formation of Israel’s current unity government to God imposing order on His creation, Prime Minister Naftali Bennett on Friday warned that the alternative is a return to chaos that could in turn lead to the Jewish state’s demise.

Bennett stated that if his government falls, Israel will return to a state of “tohu va’vohu,” the two words from Genesis 1:2 that are typically translated as “without form and void.”

See our examination of these two words and their much deeper meaning: In the Beginning Was the Word – in Hebrew

The prime minister’s comparison no doubt resonates with a lot of Israelis. The Jewish state had endured no fewer than four national elections in just two years prior to this government. And surveys continue to show that the political deadlock resulting in that frustrating reality isn’t going to end anytime soon. For them, the cobbling together of a national unity government, even if it includes parties that not everyone is happy about, was an act of mercy. 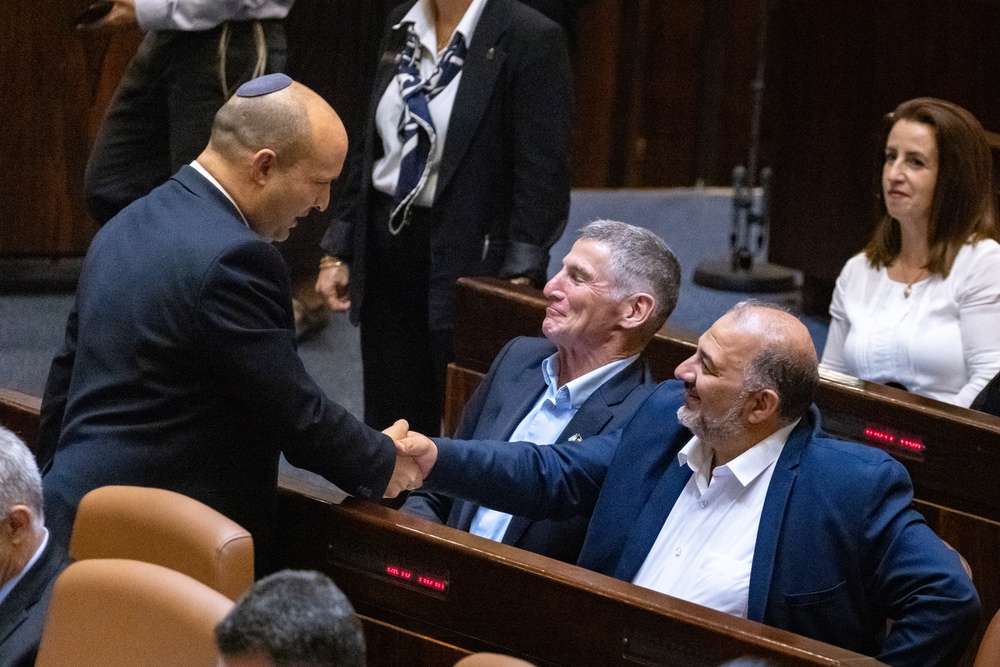 But as many predicted, just one year into its tenure, the “government of change” is rapidly unraveling. For many, including a growing number of coalition members, the current government is itself “without form and void.”

Twice in recent months have lawmakers from opposite ends of the political spectrum quit the coalition over complaints that the government was leaning too far in one direction or the other. And several others are threatening to abandon ship in the near future. 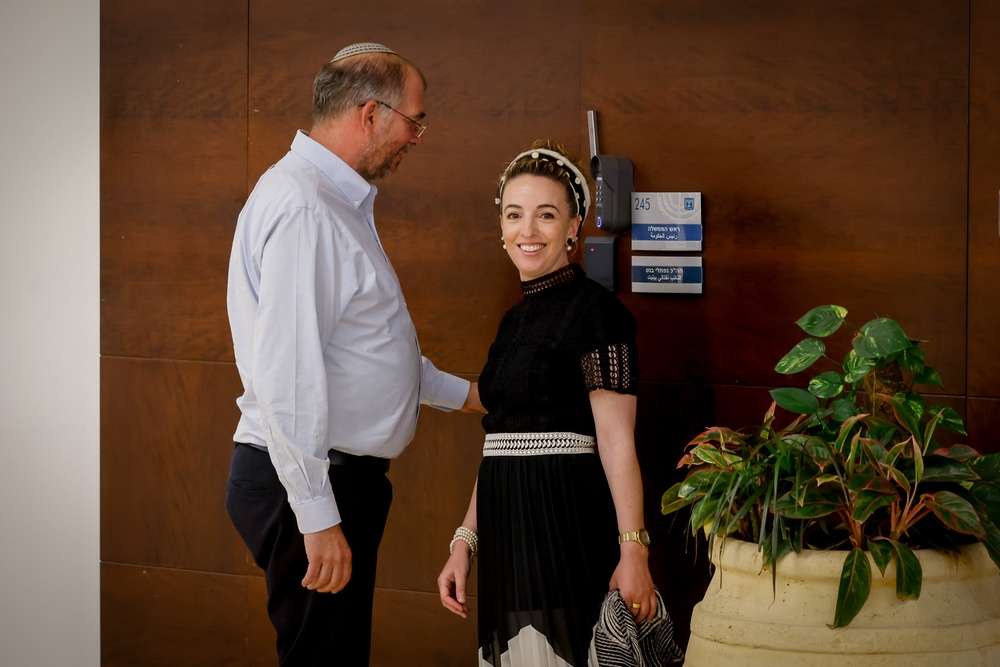 MK Idit Silman (Yamina) said she could no longer stomach the erosion of Zionist values, and quit the coalition. Others, like Nir Orbach (pictured left), have threatened to follow her example. Photo: Olivier Fitoussi/Flash90

In his public statement published on Friday morning, Bennett insisted that his government had achieved a great many things in its first year–including passing a budget and successfully facing down Hamas–and had brought stability to an election-weary nation.

In addition to quoting the Bible, he also appealed to the tragic history of the Jewish nation, suggesting that the fall of his government could mean the end of Israel as we know it:

“Twice the Jews had a sovereign state in the Land of Israel. The State of Israel is the third opportunity. Now we are facing the challenge of learning to succeed as a sovereignty state, otherwise we will fail again due to internal conflicts.”

For a deeper look at this phenomenon, see: How Long Will Israel’s Third Kingdom Survive? 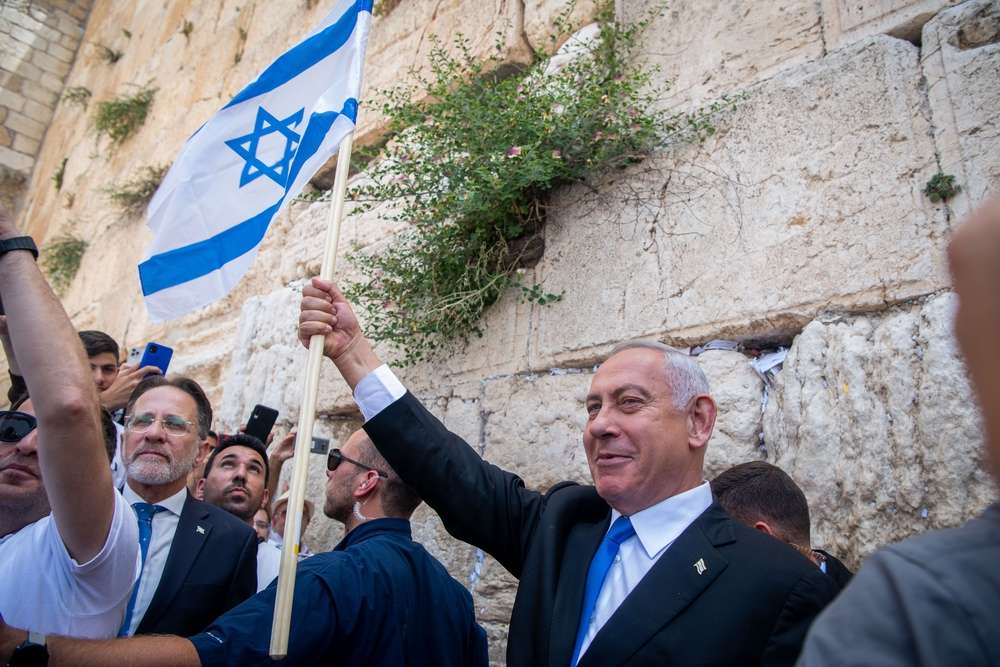 The current government’s primary raison d’être seems to be keeping this man out of power. Photo: Arie Leib Abrams/FLASH90

It’s not so much the specter of yet another election or the rise of a different government that Bennett thinks will bring Israel to ruin. It’s the return to power of Benjamin Netanyahu.

According to the prime minister, before his government came along, Israel had found itself mired in a cult of personality centered on Bibi, to use the former leader’s nickname.

Israel was trapped in “the worship of one man and the enslavement of the state’s energy to his legal needs,” said Bennett, referring to Netanyahu’s ongoing legal troubles.

Painting Netanyahu as the most dangerous threat to Israel, Bennett insisted he had no choice but to “partner with people with different opinions than my own to save the country.” 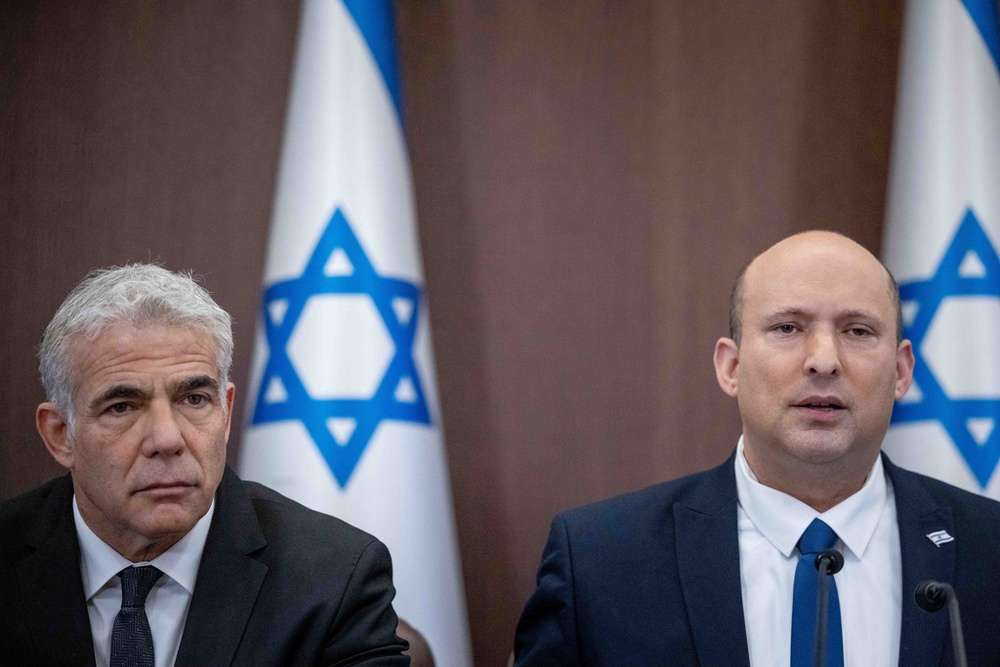 On a personal level, Bennett and center-left Foreign Minister Yair Lapid get along swimmingly. But ideologically their views mostly do not align. Photo: Yonatan Sindel/Flash90

While Bennett and his partners did indeed make good on their election promise to bring Netanyahu down, the former prime minister argued that the current government has been far less than successful, and that it is in fact threatening Israel’s future.

“Bennett’s lies can’t overcome the fact that he gave control of the country to Mansour Abbas, Ahmad Tibi and their terror-supporting friends,” read a response from Netanyahu’s Likud party.

The Likud statement was referring to the Bennett government’s recent agreement to hand over hundreds of millions of shekels to the Arab sector in order to keep Arab lawmakers from leaving the coalition. Mansour Abbas, head of the coalition’s Islamist faction Ra’am, has also leveraged his position to legalize illegally-built Arab villages throughout Israel’s southern Negev region.

See related: Are Muslims Holding the Keys to Israel’s Kingdom?

The Likud also pointed to the fact that while the government might have passed a budget, it has failed to curb “record-breaking gas, food and housing prices.” 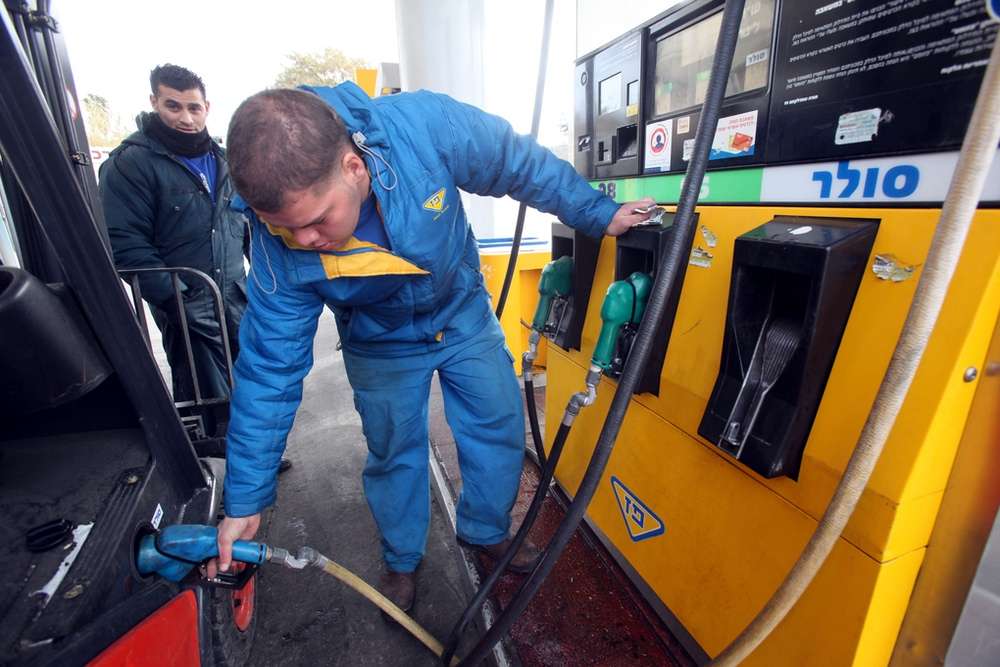 The cost of living in Israel has skyrocketed, with food, gas and housing prices all reaching record levels. Photo: Yossi Zamir/Flash90

Bennett’s coalition still controls half (60) of the Knesset’s 120 seats. And even if one more lawmaker were to quit, it could survive for some time as a minority government, so long as the opposition Joint Arab List agreed not to support any votes of no-confidence.

But it would find passing meaningful legislation nearly impossible.

And that’s if it survives.

What if the Bennett government falls?

The Knesset would be dissolved and new elections would be scheduled, unless Netanyahu could cobble together an alternate governing coalition in a set amount of time.

This, however, wouldn’t be much easier today than it was after the previous two elections, when Bibi, despite all his political wiles, couldn’t convince a majority of lawmakers to join him.

It’s not that the right-wing didn’t have the numbers. The problem is that the three right-wing parties in the current government–Bennett’s Yamina, the Likud-breakaway faction New Hope, and Yisrael Beiteinu–have all publicly refused to sit in a Netanyahu government.

Unless one of them has a dramatic change of heart, then Netanyahu’s bloc remains well short of a majority.

If elections are held, the situation could change a bit. Surveys over the past year show that the right-wing electorate is none-too-pleased with Yamina and New Hope, and both parties will be flirting with the electoral threshold.

In other words, they are at risk of not making it into the next Knesset.

Their votes could go back to Likud, or to other right-wing parties that are willing to sit with Netanyahu.

Or, this harsh reality could convince New Hope party leader Gideon Sa’ar to reverse course now and join an alternate coalition headed by Netanyahu, at least for now. Before breaking away, Sa’ar was a rising star in Likud and seen by many as Netanyahu’s natural successor.