Who are Israel’s vaccine-refusers, asked the N12 news portal last Friday. Achiah Schatz, director of the Fake-Reporter project, which scans social networks and exposes lies and incitement, told the channel: “Basically, what we’re seeing online, since the beginning of the pandemic, is the formation of groups around international conspiracies.”

The article goes on to charge: “As of July this year, three main groups can be identified as leading the social media criticism of the government’s coronavirus policies: Common Sense Model, Corona Public Prosecutor’s Office and The People’s Committee… The People’s Committee is another story. It is run primarily by  Dr. Pinkie Feinstein and two other attorneys. They distribute information that is unreliable.”

I decided to speak with Dr. Feinstein, a psychiatrist who graduated from Tel Aviv University, and find out what, in his mind, is wrong with the current vaccination campaign, and what, if any, is the conspiracy to which he subscribes.

“We are a spontaneous organization of citizens, that is comprised of doctors, lawyers and academics, in response to violations of human rights in Israel,” he tells me. “After violations were committed amid the lockdowns and mask-mandating, the injection issue began, and I as a doctor understood that something unethical, illegal and dangerous was being done here. This danger made me go out and become an activist. I felt that I’m in danger, my family is in danger, my people are in danger, and finally humanity is in danger.”

Israel Today: But Pfizer and our own health officials tell us that the vaccine is safe.

Dr. Feinstein: “Pfizer isn’t objective, since you can’t claim the vaccine is safe when it is still experimental. It’s a contradiction. Pfizer admits that we [Israel] are the test lab, while also telling us that it is safe… in the beginning they conducted trial testing on a small group of people, probably even handpicked for good results, and announced to the world that the vaccine is safe. This is not acceptable in the world of medicine.”

Israel Today: The public was told that the vaccine went through an accelerated process of authorization.

Dr. Feinstein: “It’s not an accelerated process, but rather a partial one. When you say accelerated process, you assume ‘finished fast,’ but it wasn’t finished at all. It got an emergency approval from the FDA that says that even though it is experimental, its use is approved. Under what circumstance is such an approval granted? One example is when someone is about to die, and you run out of options, you can propose to the family an experimental drug, since he’s going to die anyway. In such a case, there’s some justification for this. In our case, a drama was created to make it seem like all of us are bedridden and dying and that the situation justifies taking something that should still be under scrutiny and saying, ‘Let’s get it here now!’”

The People’s Committee that Dr. Feinstein spearheads strives to gather information directly from the field, meaning the committee serves as a hotline for people who claim to suffer adverse effects from the coronavirus vaccine, and who did not find a receptive ear in either the healthcare system or the mainstream media.

Another section of the same report reads: “Up until the publication date of this report, a total of 2,066 reports of adverse effects have been recorded by The Israeli People’s Committee and the figures continue to flow in. These reports indicate damage to almost every system in the human body. These figures also highlight the inconceivable gap between official Israeli media reports and what is actually happening, enabling a ‘two worlds’ situation due to journalistic failure to sense, identify and report on what is actually happening in citizens’ real day-to-day lives.”

Recently it was said by a representative of the committee that the number of deaths they have recorded is closer to 400, with total cases of adverse reactions to the vaccine at approximately 3,500. At this point it must be noted that the committee’s report also states: “…the report should not be relied upon for medical or other purposes, and it certainly does not contain any medical recommendation. Anyone who considers it as such, does so of his own accord.”

Dr. Feinstein continues his explanation to me: “We started investigating. And what we discovered is that there is a large number of instances of adverse effects that aren’t being reported. The media and the Ministry of Health behave as if they don’t exist. You live, as if, in two separate worlds. The official world, the one the media and most doctors in the Kupat Cholim (Israel’s HMOs) report, and the unofficial world that is social media, where people talk, and the dissonance of the two is staggering.”

Israel Today: Why do you think there is such a different picture between the two?

Dr. Feinstein: “It could be that there’s a systematic decision of ill-reporting.”

Israel Today: That would suggest something’s happening on a global scale. It wouldn’t be enough for only the Israeli media and officials to mis-report.

Dr. Feinstein: “Absolutely. And it is done using the same methods; they act like there’s no correlation [between the vaccine and adverse effects], they don’t talk about it in the news, they don’t show the real picture. The difference is that in Israel there’s a civil committee that shows you another picture. And then people start reporting in, about themselves, their family, their neighbors. Now you start seeing a very worrisome picture.”

For Dr. Feinstein, the deception is grand and all-encompassing, but without getting too conspiratorial he mentions that something very basic was avoided in the beginning of the vaccination campaign:

“What hasn’t been done in Israel is a process of informed consent. It means that you can choose, you’re not forced, you’re not coerced, you know the alternatives, you know the possible side effects – now the decision is yours. That’s informed consent, and it hasn’t been done. Instead, there was a campaign – go get vaccinated, save yourselves, save the country, if you don’t, you’ll hurt others.” 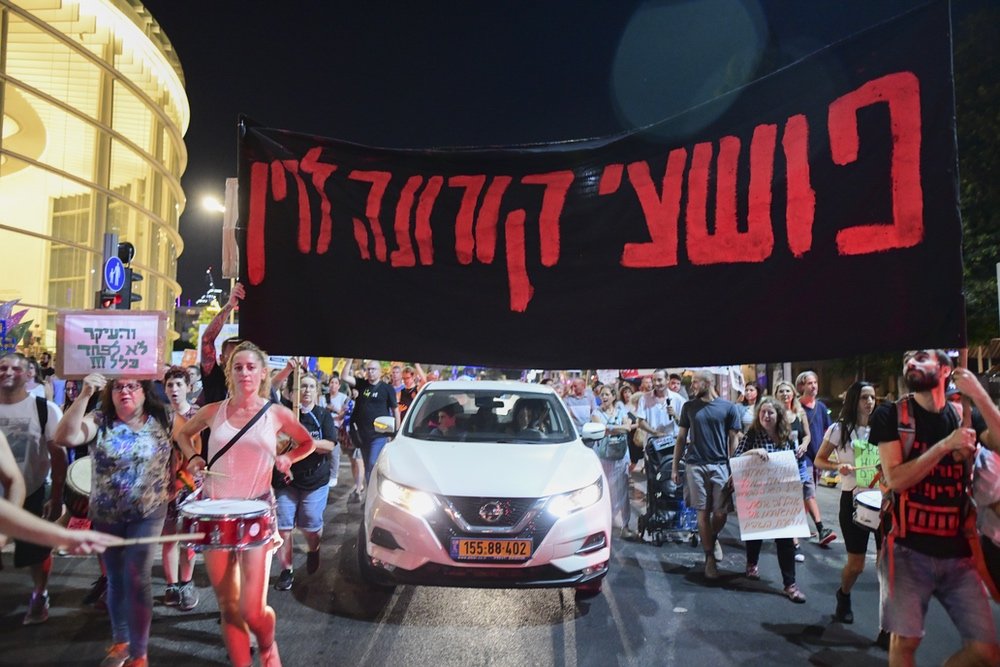 Israelis protest against what they see as government coercion to get the COVID-19 vaccine. The sign reads: “Bring the Corona criminals to justice”

Israel Today: What about doctors who see patients on a daily basis? Wouldn’t they report if something was wrong?

Dr. Feinstein: “There’s a psychological mechanism that made doctors enter the same hysteria. We know for a fact of doctors who spoke against the vaccination campaign and received threats from within the system that they need to stop or they’ll be fired, or have their licenses revoked. It scared them. Most doctors, even today, if they notice something might have happened due to a vaccine injection, they say it very quietly and won’t be willing to sign on it.”

Israel Today: Why do you think Israelis have been so willing to cooperate with government directives and recommendations on this issue? Israelis are known to have little regard for rules and restrictions.

Dr. Feinstein: ”I think it’s a mistake to think that of the Israeli. The Israeli is a soldier. The Israeli is taught from a young age to be a soldier. The army is an educational press made to control your conscience. They have to make you small in basic training to make you obedient. In healthy societies, being a soldier is a job given to a select and willing few. In Israel, everybody goes through this journey of becoming a soldier, and when faced with a common threat, their inner convictions tell them that when it’s needed, they are ‘enlisted’ to fight the enemy.”

Israel Today: You believe it wasn’t a coincidence that war rhetoric was used to convince Israelis to get vaccinated?

Dr. Feinstein: “Exactly. But what ensues? In times of war, you violate human rights. But why do we have laws and human rights in the first place? For times of war! So that clear lines can be drawn; that the government won’t be able to use a state of emergency as an excuse to lock you up and prevent you from protesting. Today, you don’t have a law in Israel, the courts don’t protect you, people are being fired or denied medical service for no legal reason. In many places they restrict you with no ties to the regulations, and nobody cares for the citizens. Everything is dedicated to injections, injections, injections.”

Dr. Feinstein remains highly controversial in Israel. His view on the vaccination issue is considered misleading, and the work of The People’s Committee is labeled as “fake news.”

We recently witnessed a similar backlash against Education Minister Yifat Shasha-Biton, who voiced her opposition to lockdowns and vaccination of children on school premises. She subsequently received a lot of fire from the Prime Minister, Ministry of Health, the press and even her coworkers. This despite the fact that Shasha-Biton is herself vaccinated and has called on others to do so. Still, her deviation from popular opinion caused a major disturbance. In an interview with Channel 13 she said: “Everyone who doesn’t align themselves with the apocalyptic forecasts and tries to ask questions and create a matter-of-fact discussion, not even a critique, but a matter-of-fact discourse, apparently interferes with the system. So to deal with such a person you stick a label on him try to make him illegitimate.”

It seems that people on both sides have let fear get the better of them. One group is afraid of the vaccines and waning civil liberties, while the other fears the coronavirus with its ever-changing variants. The groups do nothing to dispel the myths and misconceptions of the other side in a civil manner, and instead go after one another with full force, all while journalists take down strawmen in their highlight pieces.

My interviewee had something important to end our conversation together and it is a reassuring message: “There’s a possible treatment for COVID-19 that can be taken at home. Vladimir Zelenko, an American Jewish doctor, has treated thousands of patients successfully with a known medicine, not experimental. Many in Israel have also tried it with success. At some point powerful groups and lobbyists blocked it and said everybody needs a shot. Why is this important? Because fear of the pandemic is built upon the notion that there’s nothing you can do – if you get it, you’re done. But if there’s a cure, a medicine you can take to avoid severe symptoms and hospitalization, the stress levels drop. That’s the real crime at the heart of it all.”

In summary, and with a quick disclaimer, this article isn’t meant to discourage anyone from taking the COVID vaccine or taking some other drug in its place. I will borrow the Apostle Paul’s phrasing and say that each one should be fully convinced in his own mind. Do your research and consult a doctor that you trust, in order to make an informed and educated decision.

As we walk the fine line between freedom and public safety, we must remember that there is a way out and we would all do well to stop attacking and delegitimizing one another.