Dorin Frankfurt, born in Israel in 1951, is one of the Jewish state’s leading fashion designers. During our visit with Dorin, we learned that it is not easy to stay in fashion. It involves an entire agenda about life in her favorite country.

Israel Today: How did your journey begin?

Dorin: Immediately after my mandatory military service I went to Paris where I studied fashion. I returned to Israel at the end of my studies straight into the great financial recession that plagued the country after the Yom Kippur War (1973).

My attempts to find a job came to naught and I started working as an assistant to the well-known fashion photographer Ben Lem. On my home kitchen table, I set up a small design studio that later turned into a sales booth in the Kolbo Shalom market in Tel Aviv.

Over time I started working with what I call “my peer group,” who are the most famous artists today in Israeli culture. In those days they were also in their infancy. Later I connected in partnership with Margit, and we have been together for 38 years. She is like my third sister.

What is your “agenda?”

Dorin: It took us about eight years to draft our manuscript. Our inspiration was the lifestyle of our country, which is completely different from the world. The clothes are designed for a wide range of women from different sectors in our complex society.

They set up a factory that has been in existence for decades and employs many workers until this day. 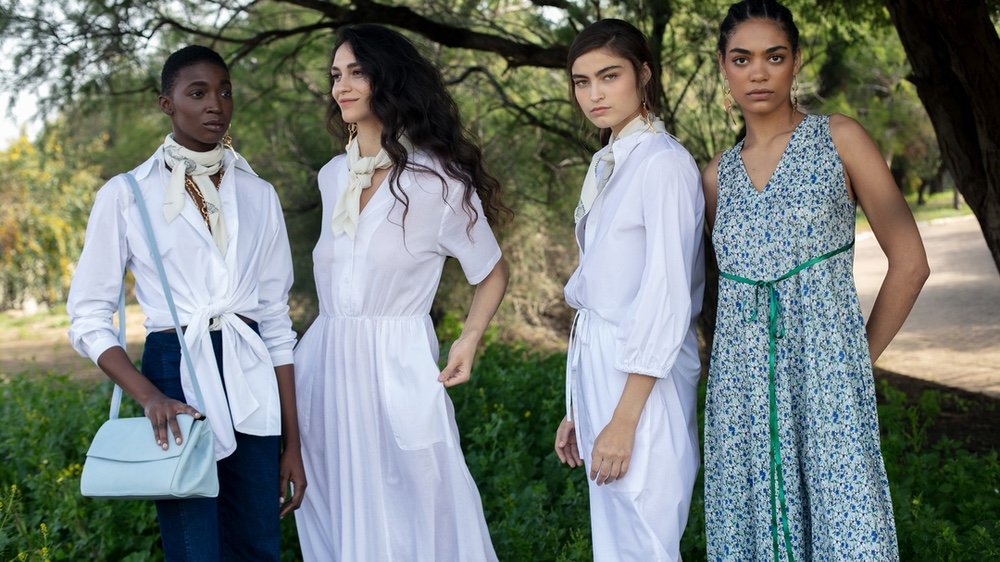 Tell us about the London period

Dorin: I thought of trying my way in the world and opened a store in Covent Garden in London designed by renowned architect Ron Arad. The store was very successful, and my life split between Tel Aviv and London. It took several years before my daughters grew up and had to decide on regular educational institutions. I decided to stay in the country (Israel).

Tell us about the changing fashion over the years.

Dorin: This is a sad question. In the 1970s to the mid-1980s, we had great pride in Israel as a textile power. The great designers of the past in Israel were invested here.

In the 1980s, there was a revolution and Israel opened up for export. Clothes from around the world entered the country and huge corporations followed. The local fashion industry has pretty much disappeared within them.

Today, there is again an interesting change in Israel, especially among the young Israeli designers I accompany. “Local” is no longer a dirty word, heritage and roots have gained strength and the uniqueness that comes from the background and the heritage of the designers has impacted the designs. There is a mix of many sectors of Israeli society expressed in the designs.

In addition, there are wonderful schools in the country producing exceptional talents, and it is our duty to provide them with jobs and not to lose the creators and their works. If we just think only about economics we will lose wonderful and important creators who grow up here.

What is special about Israeli fashion?

Dorin: First of all the loyalty of the artists to themselves, they bring something from their heart and that is what sets them apart. This is a success in the eyes of a small niche that is interested in and contributes to a particular lifestyle.

Israel is not a global success, because everything is connected and mixed with everything. Politics. Fashion. Art. Design.

And our society now unfortunately is not exactly a light to the Gentiles. We once dreamed of a place that would be light and it is our duty to return to this place. There are a lot of enlightened people in Israel, and I am personally surrounded by them, but there is not a lot of conclusive talk on this point.

Tell us about your background.

Dorin: I grew up in a family that was partly religious and partly secular. They are all people of Torah and work. Editor: Dorin’s grandfather was a brother of Israel’s Chief Rabbi Isser Yehuda Unterman.

When I was growing up religious Jews would still shake a woman’s hand. A woman’s dignity came first. My grandfather left Judaism and lived all his life in a neighborhood where there was mutual respect between the religious and secular.

My grandfather respected his brother (the rabbi) and went to synagogue on holidays and there were a lot of quibbles and musings between them. To this day there is great love between all the cousins ​​despite the difference between us. Religion is not supposed to be extreme, it is supposed to be inclusive.

One of the designs that left a huge impression in Israel and around the world was the design of the “dress of the three religions.” (See below.)

This is a dress on which I designed the symbols of Islam, Judaism and Christianity in honor of the Jubilee celebrations of Jerusalem. The idea was to advertise Jerusalem as the capital of the three religions, the capital of light.

I received a fair number of curses for this dress. I did not imagine that an idea in which everyone would feel comfortable praying to their God would be met by such resistance. After all, there is only one God. 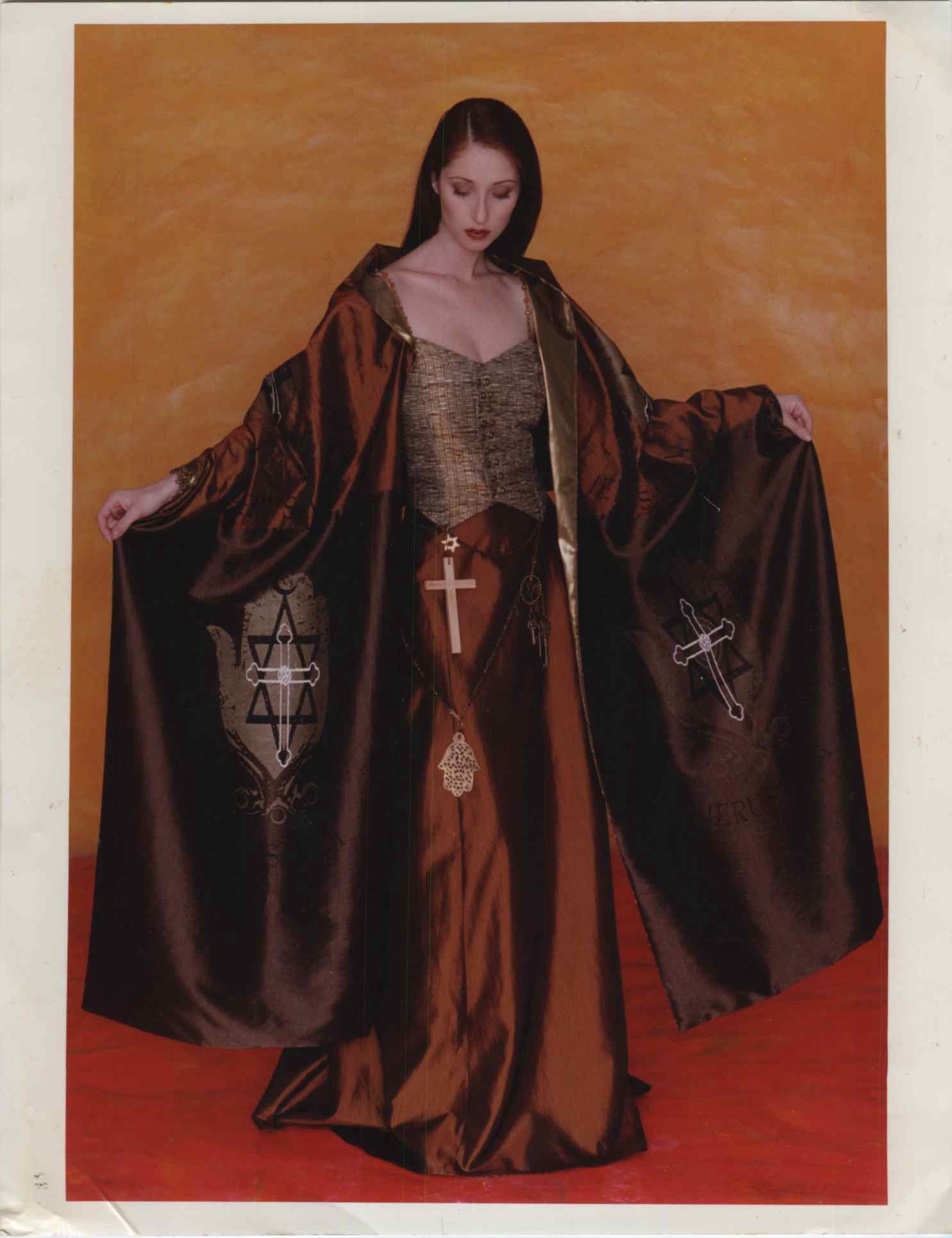 How is your passion expressed in clothes?

Dorin: My inspirations are always local.

It can be from poetic arts or natural phenomena like the Hula Valley or fireflies. Roots and heritage are a great inspiration, I also get a lot of inspiration from Georgian and Northern Italian Jewry. In my little way I can tell the beautiful story of the country.

How is this expressed on the garment?

Dorin: If the inspiration is fireflies then in every garment there is some shine, so if you turn off the light then you see in the garment shimmering sections.

If the inspiration is the mountainous Judaism from Georgia then I make textiles inspired by them. From the poet Zelda for example I took inspiration from her love of blue and the kind of clothes that were more delicate and traditional.

I was inspired by my mom and my grandmother who were feminists and believed they could make their way alongside heels and red lipstick. In addition, clothes should be comfortable and effortless and very thoughtful to serve us for many years. Not to wear and throw away.

Do you see a new dawn in the country?

Dorin: I have a good feeling from conversations with young people that they will fix what we have spoiled.