Leaving aside the language and the legitimacy of Mike Evans’ attack on Naftali Bennett (pictured with far-left MK Tamar Zandberg), his undiluted anger is really not much different from the anger of Bennett’s Israeli critics. They too speak of him as a traitor, lair, stealer of votes and so on.

This is not only because Bennett broke his election promises. That could have been swallowed somehow had Bennett only refused to reward the Arab perpetrators of last month’s widespread street violence with 50 billion shekels and the legalization of hundreds of thousands of illegally-built Bedouin homes across Israel’s south. In the eyes of many, one of the most worrisome things about Bennett’s new government is its inclusion of Mansour Abbas, leader of the Islamist party Ra’am, which shares the vision of Yasser Arafat and the PLO. Following what many now refer to as the “2021 Pogroms” for example, Abbas said the burning of synagogues, homes, cars, shops and so on, fall into the category of “legal and legitimate protests.”

Abbas, to clarify, does not refer to himself as an Israeli Arab, but as a Palestinian citizen of Israel. To the tuned ear it says everything about his true aspirations, which are similar to the aspirations of the Muslim Brotherhood, which are in turn not much different from the aspirations of ISIS. And by now it should be irrefutable that Abbas’ sense of identity is shared by a majority of Arabs living in Israel. Bennett’s new alliance with Abbas and the Left bloc, which itself has no problem with the anti-Israel Joint Arab List, is what makes him a traitor in the eyes of the right-wing constituency.

See: Mansour Abbas: Is He the Real Deal?

Many still sees Bennett’s u-turn through a psychological lens, believing his personal ambition simply ran roughshod over his ideology. But an increasing number of people are beginning to consider the possibility of Bennett being a sort of “Manchurian Candidate,” whose ultimate goal all along was to demolish the otherwise unbeatable Right, which today should be understood as a synonym for Zionism.

That the Left is no longer Zionist is supported by far too many examples to list here. Suffice it to say that the inclusion of Ibtisam Mara’ana in the Labor party signifies, perhaps more than anything else, the drift of this party from the vision of a Jewish state to the vision of a non-Jewish civic state. This is why the Left bloc is now fully embracing the Joint Arab List, a party that denies the Jewish state’s right to exist.

But what should be obvious is still hidden from the eyes of many, in particular the remaining supporters of Bennett’s Yamina party. They still believe in the old, outdated Zionist Left/Right paradigm. This faction of Religious Zionism still believes that Bennett is fulfilling the movement’s high calling to be a bridge between the Left and the Right, meaning that Religious Zionism is, or should be, the agent that will heal and unite (Jewish) Israel.

One of the advocates of this idealistic notion is Rabbi Motti Karpel, whose continued support of Bennett has done much to tarnish his reputation.

In the following social media post, Karpel lays out this vision succinctly. It reads: 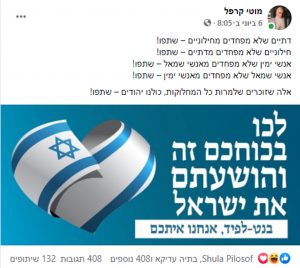 The graphic includes a quote from Judges 6:14, but in plural, “go in the strength you have and save Israel,” and ends with “Bennett-Lapid, we are with you.” This post received as many comments as it received “likes.” Almost all the comments criticize Karpel.

Smotrich leaves no room for misunderstanding. As far as he is concerned, Bennett’s “betrayal” and even criminal political shift is not about his persona, but about his decision to join anti-Zionist parties that pose an existential threat to the Jewish state. Or putting it in the words of one commentator who appears regularly on Channel 20, Yamina’s decision to join the Left is “a declaration of war on the Jewish majority that voted for the national traditional religious bloc.”

Given this breathtaking change of heart on the part of the Yamina party, a growing number of people, not all of them right-wingers, begin to wonder whether or not the Bennett-Lapid government could turn out to be the swan song of Zionism. Many right-wingers also begin to wonder whether or not people like former Netanyahu media advisor Ran Baratz are right after all in their assessment that Bennett and Yamina no. 2 Ayelet Shaked are not narcissists, but rather, as they themselves seem to suggest, agents of subversive activity aimed at dismantling the Right in order to clear the way for the replacement of the Jewish state with an entirely civic state.

Within months we will know whose vision is implemented, that of Karpel, who speaks of Bennett-Lapid as healers of Israeli Jewish society, or that of the Left-Arab vision that seeks to turn the Jewish state into a non-Jewish one. Either way, one thing is almost certain: The new government is not simply changing one prime minister for another, as Bennett would like us to believe. This government is about to create an unprecedented historical event that could be detrimental for Israel.