When Left views Right as pure evil, the Right has no choice but to view the Left as an enemy to be defeated

The left-wing Labor Party continues as a whole to voice support for Ibtisam Mara’ana-Menuhin, an Israeli Arab activist who occupies the No. 7 position on the party list ahead of Israel’s upcoming Knesset election. This behavior is scandalous to the many who don’t understand how Labor, which still claims to be a Zionist party, is ready to welcome an anti-Zionist into its midst.

At least 12 Labor Party members, including Moaziya Segal, a severely wounded decorated veteran of the Yom Kippur War, have signed a petition requesting the removal of Mara’ana from the party, but to no avail. For her part, party leader Merav Michaeli justifies Mara’ana’s presence by claiming that it’s not Labor that’s changed, but rather Mara’ana herself, suggesting that she is now at least pro-Zionist, if not downright Zionist.

Following a storm of criticism, Mara’ana finally apologized for some of her more problematic social media posts, such as one that expressed a lack of respect for Holocaust Memorial Day, and another hoping for the residents of Zichron Yaakov to return to wherever they immigrated from. But her apology was evasive and unconvincing. “I believe in the existence of the state in which I live,” she said, without clarifying what kind of a state she believes in–Jewish, or just a democratic state built by Jews that has spared her the fate of the citizens of Syria, Iraq, Lebanon and Gaza. 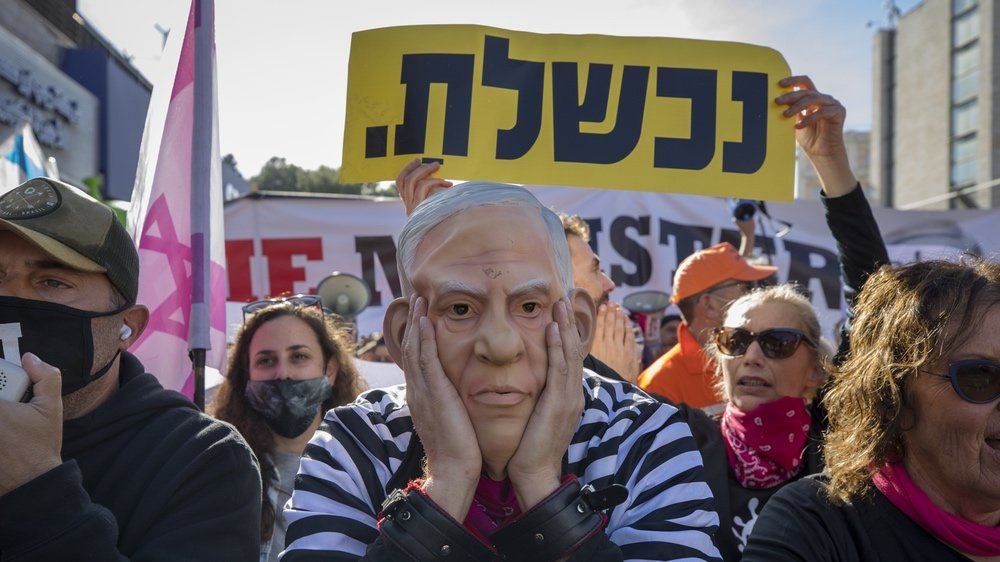 Anti-Netanyahu protestors insist that he has “failed” (that’s what the yellow sign says). But given his list of achievements (see below), it’s a message that only resonates with those who were predisposed to despise the prime minister.

And besides, say many from the center-left bloc, if the choice is between sitting ing a coalition with Itamar Ben-Gvir of the far-right Otzma Yehudit party or with Mara’ana, they’ll choose the latter. Just a few days ago journalist Yinon Magal asked Member of Knesset Karine Elharrar of the centrist Yesh Atid party whether or not she would agree to include the vehemently anti-Zionist Balad party in a “just-not-Bibi” coalition. “Without a doubt,” she said, adding that “any party that will vote to cast Netanyahu out” is welcome.

This is because in the eyes of the center-left, the Right is perceived as evil. Yesh Atid party leader Yair Lapid tweeted that the religious Right is an abominable entity in which “everything is permitted in the name of racism and extremism.” In response, Arutz 7 journalist Techiah Peretz said, “No Yair, there is no limit to your abomination that purifies the unclean, like Ibtisam Mara’ana, in order to legitimize her as a partner in your government and make us think that Ben-Gvir is the problem.”

Why does the center-left favor virulent anti-Zionists like Mara’ana over what one might call an overzealous Zionist like Ben-Gvir? The answer lies in the current ideological climate. Those seeking and hoping for Israel’s demise are no longer seen as enemies. Rather, the threat to Israel’s survival is perceived to be coming from those who object to the Left’s progressive vision, which for the most part is devoted to the eradication of an imagined racism and despotism that characterizes the Right.

Speaking of racism, consider Mara’ana’s response to her opponents. Instead of addressing their legitimate concerns, she accuses them of being racists. “An Arab woman frightens you? Deal with it,” she wrote on Facebook, even as her own party members admitted that they voted for her only because she is Arab, in other words, on purely racial grounds.

And concerning despotism, for a long while now the center-left has portrayed Netanyahu as an embodiment of evil that will bring Israel to ruin. A tweed from Labor candidate No. 3 Emilie Moatti, written with the Mara’ana scandal in mind, claims without any reservations: “Not one person so evil and contemptible as Bibi has ever become a prime minister … an unbridled, cruel evil, him along with the sewage pipes around him.”

Now, since at the very least Netanyahu must be credited with the successful COVID vaccine drive that is saving countless Israeli lives, and since it is he who signed the peace treaty with the UAE, and since during his tenure Israel solved its freshwater problem by building massive desalination plants, he can’t be that evil. Therefore, what’s left is him being evil on account of what he stands for, which includes, among other things, his uncompromising dedication to Israel as a Jewish state. (See related: Villain and Messiah)

In this climate, where the Left views the Right as pure evil, the Right has no choice but to view the Left as something that must be defeated if Israel wants to survive as a Jewish state. And when the stakes are so high, one would better hope that the battlefield remains confined to social media.