Normally in Israel rain is a sign of blessing and abundance – a greatly desired thing. But starting last week, stormy weather came to paradoxically plague the Middle Eastern paradise. And it only got worse this week.

Just yesterday, severe flooding in the northern city of Nahariya claimed the life of Moti Ben Shabbat. Selflessly, he had leapt into the swift currents in an attempt to rescue people who were trapped in a vehicle and being swept away. Ben Shabbat was pronounced missing, and was found hours later by the estuary with no signs of life.

Nahariya is situated just below Rosh Hanikra, and the Ga’aton River that runs through the heart of the city lies dormant throughout most of the year. Occasionally, during the rainy season, the river will overflow and water will spill over its banks onto the main street, making it difficult to commute. This time, however, precipitations were high above average, and the river overtook the entire city.

Many people were trapped at work and at schools. Army personnel and volunteers in rescue vehicles worked throughout the day and well into the evening. Residents stranded all over the city had to be rescued and returned to their homes or other safe places.

“Dear Nahariya residents, first of all, we have one casualty. My condolences to the family. My hope is that none more will be lost. The city is currently besieged to the north and to the south; you cannot cross without the help of rescue teams. The Israel Police are in charge of the situation. There are many forces here to help, mainly to move people from north to south.”

Saved by a backhoe

During my own commute home from work today, I witnessed firsthand the chaos that the flooding has wrought on the city. After my bus got stranded in the flood, I was carried across the city to safety in the bucket of a backhoe tractor, lifted high above the rising floodwaters.

Many such tractors, firetrucks and army vehicles were making rounds, helping people get around the currents.

Local residents were helping in any way they could. They offered tea or hot coffee and snacks to those stranded for hours in traffic, or waiting at the river banks to be picked up by rescue teams.

The storm moves on

Other areas in Northern Israel also took a hard hit by the severe weather conditions, with the storm moving south, toward central Israel. Haifa and the adjacent town of Nesher saw massive flooding as well; many roads were blocked and public transportation was forced to stop operation. That included trains, as the tracks became too flooded for them to safely travel.

Thus far the storm has claimed 5 lives, with the most notable and tragic case being that of Stav Harrari and Dean Shoshani, who were killed Saturday after becoming trapped in a flooded elevator. They were buried next to one another in the Yarkon cemetery in Tel Aviv. 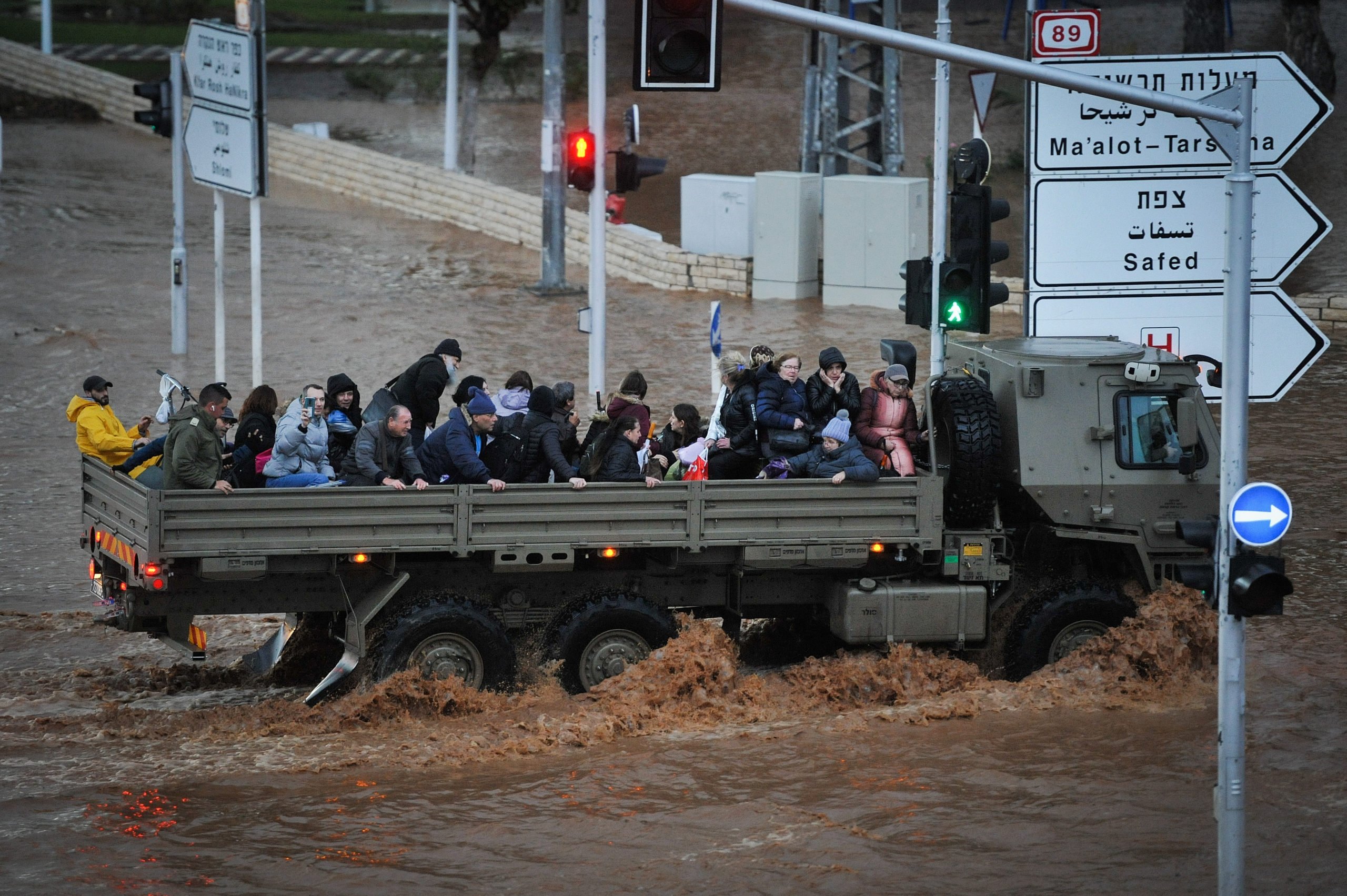 The military had to be called in to rescue local residents from the waters.