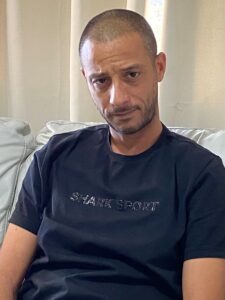 No one would have known about it if Hader Habib weren’t home, recovering from a motorcycle accident that fractured his skull. And no one would have known it had happened if his wife hadn’t sent him down to fetch something from the family’s storeroom, where Hader keeps the monitor connected to his surveillance cameras, one of which is placed above the entrance to his apartment.

Just as Hader was entering the ground floor storeroom, he tells me with a hint of shock still in his voice how he spotted on his monitor a medic with Israel’s Magen David Adom (the local equivalent of the Red Cross). The medic had been called to the apartment of Hader’s neighbor to administer a COVID-19 test. Curious, Hader watched the medic on the monitor as the latter removed his protective suit and prepared to leave the building. 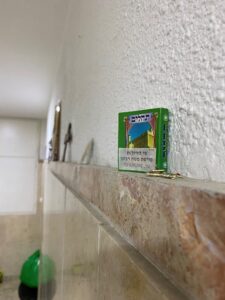 The tiny Psalms, next to where the pictures of Jesus and Mary hung before the police took them for DNA sampling. Courtesy Hader Habib

But before he went, and to Hader’s horror, the medic proceeded to spit on three pictures (icons) of Jesus and Mary hanging in the hallway just opposite Hader’s apartment. And just before entering the elevator, the medic spat on Jesus and Mary again. While desecrating the Christian iconography, the medic didn’t seem to notice the small Book of Psalms placed just beside the pictures.

The Habibs are an Orthodox Christian Arab family that moved to the neighborhood 35 years ago. The street where they live is at the very end of Tel Aviv, so that the south side of the same street is where the city of Bat Yam begins. The building where Hader Habib lives is part of a three-building complex, all of which are owned by Arab Christians, who, as Hader emphasizes, have never had any problem with either Jews or Muslims. Coexistence is what they believe in, even after the incident with the medic earlier this week, which shook Hader to the core.

In confronting the medic, says Hader, “as shaken as I was, I decided to refrain from using any physical force and let the law take care of him. I asked the medic why he spit on the pictures that we kiss every day as we go out of our home, something which is sacred to us, something we believe in.”

The medic, a young religious Jew, responded that he had done it because “our Torah considers this idolatry which one is obligated to push away.” 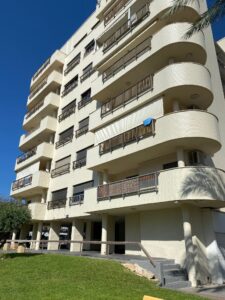 One of the three apartment buildings owned by Arab Christians. Courtesy Hader Habib

Hader wasted no time uploading the video evidence to the Internet and notifying the press in hopes that the ensuing media outrage would prompt the police to take action against the medic. “I want the whole world to know what this man did,” the Arab Christian told Israel Today.

In addition, Hader filed a police complaint on the grounds that the medic had violated Israel’s law that prohibits insulting the religion of others. The maximum penalty is three years in prison. And whether or not it’s because this became a news item, the police immediately sprang into action and took the religious icons for a DNA sampling, which will confirm the medic as the culprit. Those who are familiar with the Israel Police know that it is highly unusual to send a team crime scene investigators over such an offense.

For its part, Magen David Adom immediately suspended the medic and issued a statement declaring him “unworthy of wearing the organization’s uniform. He has no place among our ranks … which are here to serve all religions and sectors in Israel society.”

The incident infuriated the younger Arabs living in the complex, and they nearly set off to riot in the streets. But Hader and the community priest were able to calm them down, thus averting an escalation that could have damaged the good relations that Arabs and Jews enjoy in Jaffa. Even so, as far as Hader is concerned, he is waiting to see if his obedience to the law pays off, and the medic is duly punished by the authorities.