Jacob was born to a very observant Orthodox Jewish family in the region of Lublin, Poland in 1931. He was the youngest of the four children.

The family attended synagogue and Jacob later remembered the family celebration of the biblical feasts fondly. Jacob spoke mostly Yiddish along with some Hebrew and Polish. The small, struggling family business consisted of trading in wood and coal.

As the conflict of World War II loomed on the horizon, Jacob’s oldest brother Hayim had the premonition that he should leave Poland, and he did so, going to Russia (before eventually making it to Israel). 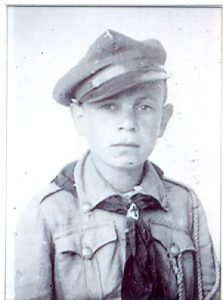 Jacob-Gregor as a scout. Hard to comprehend what his young eyes had already seen. Photo courtesy of Catholic.co.il

In September 1939, the Nazi army invaded Poland. Decades later, Jacob could still remember the sound of Nazi planes and the bombs exploding. Thus at the tender age of just 8, Jacob and his family were plunged into survival mode struggling to find the next meal to eat and avoid the increasing antisemitic violence of the Nazi occupation and its collaborators.

Eventually the Jews of his town were driven to live in a ghetto. Jacob’s father, Mendel, was forced into slave labor by the Nazis. One day, Mendel had a premonition that he would not return to his family. He tearfully hugged them all and departed, and indeed he did not return! Little Jacob, his two sisters and mother Miriam were heartbroken.

Later the Nazis began rounding up the Jews in earnest. Jacob and his remaining family members hid in a basement along with others, but then a baby began to cry and they were discovered. Miraculously, Jacob slipped away unnoticed. About 10 days later his mother and sisters were massacred along with others at the edge of a pit the Nazis had prepared in the town cemetery.

Little Jacob was now utterly alone in this world – an orphan boy left to take cover from genocide. Where could he turn to?

He wandered the region. Here and there someone took him in for a day or so and fed him – at times the few remaining Jews and at times Poles. Someone taught him Catholic prayers, and curiously enough, another Jewish boy gave Jacob a Catholic baptism certificate to help him survive! Jacob adopted the Polish name written on the baptism certificate – Gregor Pawlowski.

The baptism certificate soon helped him. When Nazi soldiers took him to the Gestapo, he was released after showing it to them. A near miss. Jacob (now Gregor) continued to seek to survive without being apprehended by the Nazis. His (false) certificate would not be enough if the soldiers were to discover he was circumcised.

He found work with a Polish family, helping tend their cows; but when the cows got away from him, the Polish family got angry and he was forced to flee.

After the Russian army conquered Poland and the war ended, Gregor (Jacob) was placed by the Red Cross in a Catholic orphanage and continued to conceal his Jewish identity. 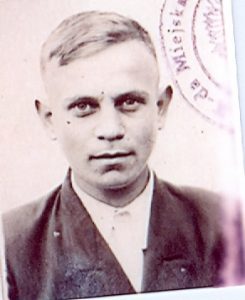 In the summer of 1945, Jacob was baptized at age 13. He felt his connection with Catholic/Christian belief had saved his life. Gregor (Jacob) learned in seminary and became a Catholic priest. During these studies he finally revealed that he was a Jew.

In 1966, an article was published telling the remarkable story of Gregor (Jacob). Incredibly, Gregor’s relatives in Bat Yam, Israel read the story, and he was able to reconnect with his brother Hayim and other relatives.

Gregor moved to Israel in 1970 and joined another Jewish-Catholic priest named Daniel Rufeisen. But before coming to Israel, Gregor (Jacob) erected a monument in memory of his family members and the other murdered Jews of his town Izbica, by their mass graves.

The inscription on the memorial (in Polish and Hebrew) reads:

For I know that my redeemer lives
And that at the last he will stand upon the earth
(Job 19:25) 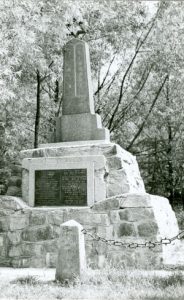 Holocaust memorial that Gregor helped erect in Poland in memory of family members and other Jews murdered nearby. Courtesy of Catholic.co.il

After Gregor moved to the Jewish state in 1970 he served the Polish-speaking and Hebrew-speaking Catholic communities in Israel, especially in Jaffa – until he passed away in October of 2021.

When asked why he wanted to come to Israel, Gregor replied:

“My place is here, among the Jewish people. I sensed a call to come and serve Christians living in my country.”

Near the monument he erected to honor his murdered family, Gregor also prepared a place for himself to be eventually reunited in burial with them. Last month Gregor (Jacob) was laid to rest. His head stone inscribed in Hebrew and in Polish decades ahead of time, reads thus:

They came to take us for extermination

I have returned unto them, to this place
Where they were murdered for the sanctification of God’s name

May their souls be set in eternal life

When asked why it was important to tell his story, Gregor replied:

“I did not want to live a lie. I did not want to deny my roots, my mother, my father, my people. I want to be truthful. Thus, I have a homeland and that is Poland and I belong to the Polish people. However, I have a nation that is first – the Jewish people. I was circumcised on the eighth day and I belong. I belong both to Poland and to Israel. I cannot speak against Poles because they saved me and I cannot speak against Jews because I am one of them.” 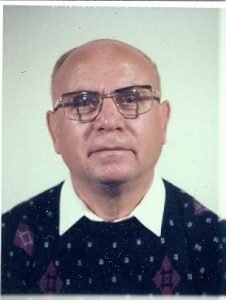 Among the many books Gregor wrote was Know the Messiah (or “Recognize the Messiah”), intended as a tool to help teach children.

From the Epilogue of Gregor’s autobiographical book written in Polish Shoah Survivor, at the Service of Christ published in 2012:

“In 1970, I left Poland with tears in my eyes. When will I see my country again? … I was going to Israel with peace in my heart, leaving everything to the will of God. I was sure I had a task to do in the Church. In the ‘travel document’ that served as an identity card, it was written ‘Jew’. I was not considered a Polish citizen anymore since I was going to stay permanently in Israel. I arrived in Tel Aviv, wearing a priest collar, and that looked incomprehensible to them. The Israeli authorities wrote ‘Polish’ in the paragraph ‘nationality’, because a Jewish priest was something strange.”

“Later I would fight against it, because baptism did not make me Polish, and circumcision is a sign of Jewish identity for a lifetime. Finally, to avoid legal difficulties, they [Israeli authorities] wrote a simple ‘dash’, which means ‘no nationality’. It is an indication of a certain callousness among people – a mother would never disown her child. In fact, I am connected to both the Jewish and Polish peoples. I survived the Holocaust, by a miracle, thanks to the Poles. For a long time I have been a Catholic priest. Just like before, in Poland, so also now, in Israel I live the life of a priest.”

“Despite the disappointment I felt, I do not harbor a grudge against my people. I do not disassociate myself from my family, I do not cut my roots – this would not change the truth: I am Jewish, because I was born of a Jewish mother; and that, for religious Jews, remains a sacred mystery. I am not split, but rather enriched. I am truly Jewish and truly Polish, even if marked with a Jewish sign [circumcision]. Poland and Israel are my two homelands, which have a lot in common. Poland believes in Christ the Savior, which is a part of a history of the Holy Land and the Jews.”

“One thing comforts me. I have the blessing of Christ, Elijah and Moses. Their relationship was confirmed on Mount Tabor. Jesus is a Jew – nobody questions his Jewish identity. As for me, the Israeli legislation system may have doubts…”

These articles may also be of interest: