On the final day of the Jewish feast of Hanukkah – and just a week before Christmas – we focused once again on the light of the world represented for many by the central ‘servant’ (or Shammash) candle of the nine-branched menorah.

Last Saturday I was privileged to host a talk on Hanukkah by the Rev David Pileggi, Rector of Christ Church, Jerusalem, headquarters in Israel for the past 175 years of the Church’s Ministry among Jewish people (CMJ).

Rev Pileggi is clearly not too impressed with candles and all their symbolism (despite his Anglican credentials), but he did shine a light on a missing element in the Gentile church by pointing out the emphasis in Jewish festivals on rejoicing.

Most Jews today have not yet found Jesus, yet are able to express exuberant joy, something now needed more than ever amid the gloom and doom of the Covid pandemic, not to mention dark winter nights. 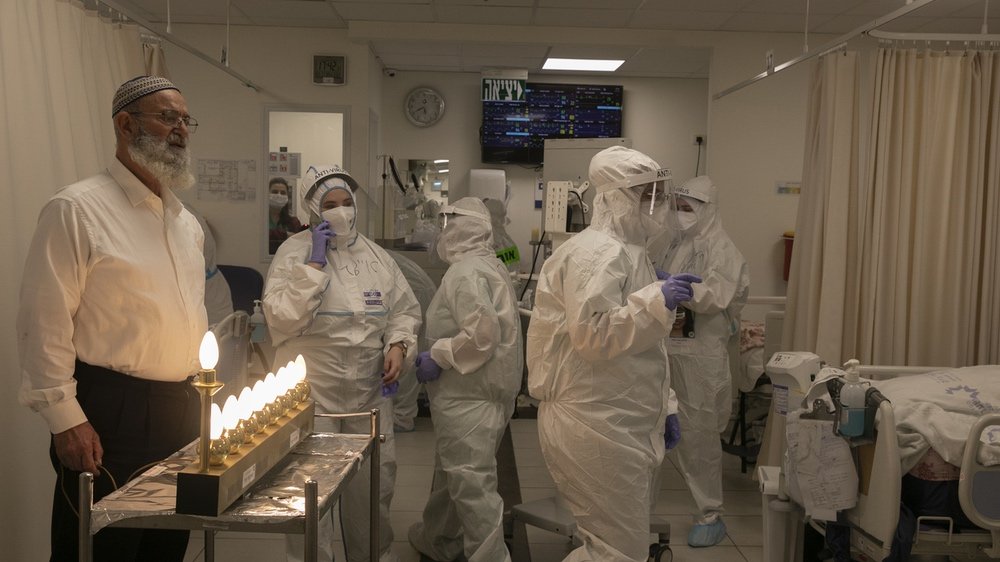 Christians can learn much from the Jews, who don’t allow even the most challenging circumstances to dull the joy of commemorating God’s miracles and blessings.

The Jerusalem cleric confessed that one of his hobbies was ‘watching Britain’ – by regularly reading both The Guardian and the Daily Mail (to get a balanced view, I guess). And he has come to the conclusion that the state of the UK is summed up by the words of Paul to the Ephesians – of being “without hope and without God in the world” (Eph 2:12).

For the Christians of Ephesus, it was past tense – they had been rescued from such despair – whereas it now describes the mood of modern Britain, a nation that formerly had so much to give the world, spiritually speaking.

In a setting of such hopelessness, Rev Pileggi suggested, it is so important for Christians to be seen as joyful people.

John the Baptist, the cousin and forerunner of Jesus, perhaps sometimes depicted as stern and unforgiving, was actually a man of joy. In the very first description of him, the angel is recorded as saying: “He will be a joy and delight to you, and many will rejoice because of his birth…” (Luke 1:14)

This is clearly linked with being “filled with the Holy Spirit” (v15). Even as a baby in the womb he “leaped for joy” at the greeting of Jesus’ mother (v44).

Mary’s response in turn was to rejoice in God her Saviour. Zechariah, John’s father, was temporarily struck dumb for his unbelief when the angel announced that his ‘barren’ wife would have a son in her old age. But the first thing he did when his tongue was loosed was praise God (v64).

The coming of Christ, the shepherds were told, was “good news of great joy” (Luke 2:10) and they duly “glorified and praised God” (v20).

Centuries earlier, the prophet Zechariah said there would be great rejoicing at the coming of Israel’s King, “gentle and riding on a donkey”. (Zech 9:9)

The psalms are full of calls to sing with joy to the Lord, and Paul tells the Philippians: “Rejoice in the Lord always; again I say rejoice.” (Phil 4:4) And even when the Israelites wept as Ezra read the Book of the Law in Nehemiah’s day, they were urged: “Do not grieve, for the joy of the Lord is your strength.” (Neh 8:10)

Was this a preview of the Day of Pentecost when the pilgrims were “cut to the heart” (Acts 2:37) by the Word of God and encouraged to repent and believe the gospel which, in the power of the Spirit, would bring them great joy?

Just as the Shammash or servant candle is the one that lights those around it, Jesus is the Son given unto us (Isaiah 9), who came to baptise us with the Holy Spirit and with fire – the latter being a cleansing agent to burn up the dross of whatever was not important, and give us a flaming passion for the Saviour who bought us with his blood.

We’ve had the modern-day Pentecostals and charismatics, yet still there’s a joylessness about much that passes for Christianity. The 120 disciples who waited in prayer for the baptism from on high were simply obeying their Lord’s command: “Do not leave Jerusalem, but wait for the gift my Father promised… For John baptised with water, but in a few days you will be baptised with the Holy Spirit.” (Acts 1:4f)

In this way they turned the world upside own, and their joy – amidst all their many trials – could not be contained.

I can testify to a similar experience. Though put off from seeking such a baptism by traditionally accepted doctrine, I eventually became so desperate for more power in my Christian life – particularly to resist temptation – that I asked for appropriate prayer, i.e. a ‘baptism of the Spirit’.

I soon became flooded by the joy of Jesus. I was seeking strength, but I got joy. It was only much later that I realised there was a connection between the two, that “the joy of the Lord is your strength”.

In many ways life became more difficult, but the joy kept bubbling up, just as Isaiah prophesied: “With joy you will draw water from the wells of salvation.” (Isa 12:3)

Jesus promises to quench our spiritual thirst. To the woman at the well, and all who seek him, he promises “a spring of water welling up to eternal life” (John 4:14)

If, like the first disciples, you wait for the gift from on high, you will be endued with all you need to lead an effective, energised and joyful Christian life.

As the late Selwyn Hughes said: “Many Christians live tense and stressed spiritual lives in the sense that they try too hard to be good… It is all very earnest, but not very inviting.”

A baptism of fire, on the other hand, purifies and melts us “so that when the pressures come upon us, we will not break, but only bend.”

Back to that biblical phrase with which Rev Pileggi summed up Britain – “without hope and without God in the world”. It is surely time to let loose – in our homes and schools, on our streets and in our churches – a body of spirit-filled Christians burning bright with the joy of Jesus.