(JNS) Congresswoman Rashida Tlaib (D-Mich.) has taken to Twitter to announce that she will introduce a House resolution that calls for official recognition of the “Nakba,” which she—like most Palestinian nationalists—describes as the “catastrophe” that occurred in 1948 when Israel demolished 400 Palestinian communities and made refugees out of 700,000 Palestinians. She frames this as an issue of human rights and justice, but in reality, it is an issue of ignorance of recent historical events in the region and the antisemites that prey upon it for personal gain.

The resolution’s supporters were the normal cadre of Israel-haters and antisemites—Reps. Alexandria Ocasio Cortez (D-N.Y.), Ilhan Omar (D-Minn.), Betty McCollum (D-Minn.), Marie Newman (D-Ill.), Jamaal Bowman (D-N.Y.) and Cori Bush (D-Mo.). Most, if not all, of these co-sponsors have consistently sided against Israel, endorsed the BDS movement, labeled Israel an apartheid state and worked to dissolve the strong alliance between Israel and the United States. The resolution itself is a sophomoric diatribe filled with propaganda typical of both the Palestinian Authority and anti-Israel Jewish groups like J Street and IfNotNow. It lacks the context of the events that preceded and succeeded Israel’s 1948 War of Independence and places all blame for the subsequent crises of the Palestinian people on their existential enemy—the Jews.

The phrase “Nakba” means “catastrophe” in Arabic. Tlaib describes it in the resolution as the “experience of uprooting, dispossession and refugeedom,” which she alleges were caused by Israel. This, the resolution says, refers “not only to a historical event but to an ongoing process of Israel’s expropriation of Palestinian land and its dispossession of the Palestinian people that continues to this day.” An examination of the real story behind this “catastrophe,” however, explains why the Palestinians are the only people in the history of the world to still be refugees four generations after they were displaced. 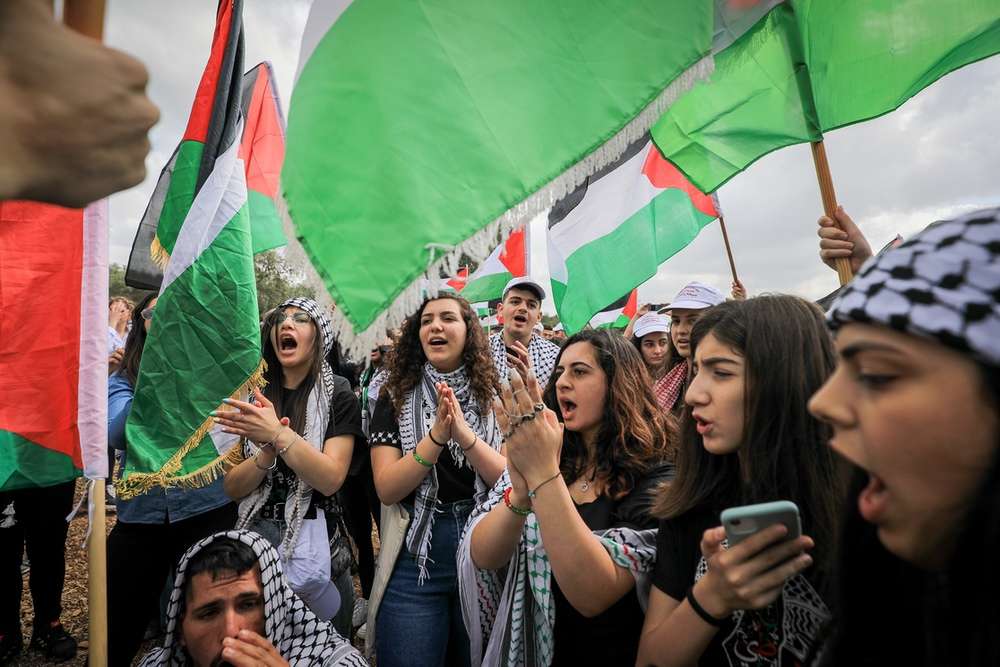 Kind of hard to make peace with a group of people who think your nation’s establishment is an ongoing “catastrophe.” Photo: Jamal Awad/Flash90

Prior to the 1947 U.N. partition plan, which sought to create two states—Jewish and Arab—in British Mandatory Palestine, antisemitic attacks in Europe and Russia forced thousands of Jews to emigrate to their historical homeland. Palestine, however, was not a sovereign state, but an area controlled by a number of empires for two millennia, most recently the Ottomans and then the British. In fact, prior to 1948, the last sovereign state in that land was called Judea, and it maintained its sovereignty for 102 years. From the expulsion of the Jews after the destruction of the Second Temple until May 15, 1948, the land of Palestine was under the domination of no less than nine different imperial rulers, none of whom thought much of the ancient Jewish homeland. Indeed, the name “Palestine” itself was coined because the Romans wanted to add insult to injury. They renamed Judea after the historical enemies of the Jews—the Philistines.

In the time that led up to the establishment of the State of Israel, the army that would one day become the Israel Defense Forces prepared themselves for the invasion that they knew would come. The Arabs who lived in the area knew it would come as well, so they did what they were told to do—they got out of the way. The Palestinian refugee situation was a crisis of their own making, because they assumed that the Arab armies of Jordan, Syria, Iraq, Lebanon and Egypt would wipe out all the Jews and they would return to their homes, now Jew-free.

They believed this because their leaders told them so over and over again. “We will smash the country with our guns and obliterate every place the Jews seek shelter in,” said Iraqi Prime Minister Nuri Saif. “The Arabs should conduct their wives and children to safe areas until the fighting has died down.” The Jordanian newspaper Filastin admitted the same after the ceasefire that ended the war: “The Arab States encouraged the Palestine Arabs to leave their homes temporarily in order to be out of the way of the Arab invasion armies.” It was the Arabs’ failure to slaughter the Jews that the Palestinians came to call their “catastrophe.” All Arabs that remained in Israel became citizens with full rights. Those who fled were left to the tender mercies of their new host countries.

After the war, the Arab refugees went to other Arab nations: 100,000 to Lebanon, 75,000 to Syria and 70,000 to Jordan. 280,000 went to the West Bank, which Jordan annexed, and 190,000 went to the Gaza Strip, over which Egypt maintained military control. Not one of these Arab nations resettled these people. At the same time, Arab nations expelled their Jewish populations in droves, without the pretext of war in their lands. Morocco expelled 260,000, Iraq expelled 129,000 and so on. This is not to mention the hundreds of thousands of European Jews who were displaced after the Holocaust. None of these people languished in camps and demanded to be returned to their homes. They made their way to Israel, where a nation in its infancy—and still reeling from an existential war—resettled them and gave them full rights as citizens.

The Arabs continued their effort to destroy Israel, and told the refugees situated in their countries not to worry—once all the Jews are dead, you can go home. All of this was under the watchful eye of the United Nations, which created useless organizations to help facilitate the continued oppression of the Palestinian people by other Arab nations and their own leaders. When Israel won the Six-Day War, they did not conquer Palestinian lands in the West Bank and Gaza Strip—they conquered Jordanian and Egyptian lands that contained a Palestinian population that had languished in refugee camps for two decades. Unlike Jordan and Egypt, they did not annex this land and leave the refugees as second-class citizens.

The Palestinian Liberation Organization (PLO) then chose to launch decades of terrorism against the Jewish people. Israel attempted peace with the PLO and the Palestinian Authority many times over the years. When land was offered, it was rejected and terrorist attacks were launched. When Israel left Gaza in 2005, it became a safe haven for Hamas and thousands of rocket attacks. 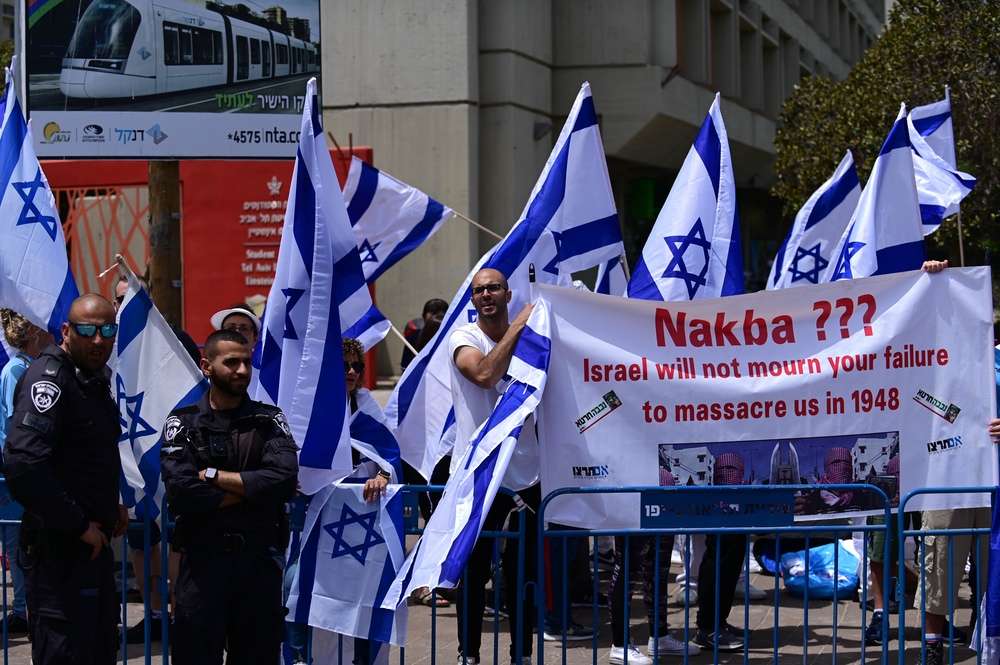 As this counter-protester at Tel Aviv University noted, Israel will not mourn the Arabs’ failure to drive the Jews into the sea. Photo: Jamal Awad/Flash90

The problems the Palestinian people face are numerous indeed. They lack resources, jobs, education and healthcare. This is not the fault of Israel. It is due to decades of exploitation by Arab nations that used them as political pawns until they realized that Israel isn’t going anywhere. Now the Arab world is bored with the Palestinian “catastrophe” and has begun to sign peace agreements with Israel to ensure their survival against an emboldened Iran. Israel has become an economic and technological powerhouse with a military envied by almost every other country in the world. Yet the Palestinians are trapped in the past, and blame the Jews for the problems inflicted upon them by their own leaders.

Tlaib’s parents emigrated to America and appear to have infused their daughter with the falsehood that all the problems faced by their people were the fault of the Jews. The resolution she has filed has nothing to do with facts, history or the correction of injustices. It’s about the use of her position as a member of Congress to settle her vendetta against a people who didn’t have the courtesy to allow themselves to be pushed into the Mediterranean Sea. Tlaib has chosen not to use her power and position to help the Palestinians, she uses them as a weapon against the Jewish state. In doing so, she is as bad—if not worse—than the nations that refused to help her great-grandparents after 1948, and her actions will ensure that the Palestinian people continue to live in abject poverty for generations to come.

Moshe Hill is a syndicated columnist who has been featured in Daily Wire, Washington Examiner, CNS News and others. Moshe can be found at Facebook.com/aHillwithaView and Twitter.com/HillWithView and aHillWithaView.com