Demonstrations continue to take place in a number of cities across the country – in Jerusalem, Tel Aviv, Caesarea and other places. Thousands of Israelis are taking to the streets in protest of government policies.

Jerusalem police have allowed demonstrators to march in the area of the official residence of the Prime Minister on Balfour Street. One of the regular demonstrators there told the Vesty newspaper:

“The whole situation creates a strong sense of helplessness. Something has to change. I was personally affected by the economic crisis due to the coronavirus. All new businesses continue to shut down. For almost five months I have not received a normal salary, I have not been able to pay rent for two months now. This cannot continue. Someone has to answer for what is happening.”

To further understand the demonstrators’ demands, see: Who Are the Balfour St. Protestors, and What Do They Want?

Although the demonstration was allowed until 11:00 pm, at around 1:00 am protestors still crowded on Balfour Street in the capital, shouting slogans into megaphones, despite calls from police to stop the noise and disperse. At two o’clock in the morning, the police dispersed the remaining several hundred protestors, 12 of whom were detained during clashes with law enforcement for disturbing public order, attacking police officers and illegal launching of drones. 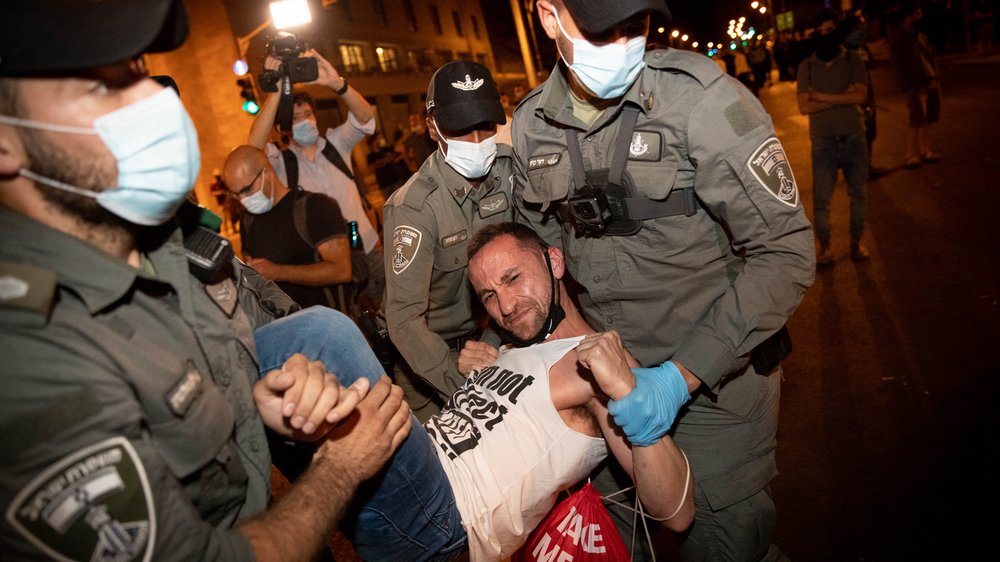 Protestors in Jerusalem clash with police, who critics have alternatively accused of being either too rough or too soft on those disturbing the peace.

In parallel with the demonstration in Jerusalem, associations of the self-employed and small business owners held their own demonstration at the Charles Clore Garden in Tel Aviv. It was held under the motto “Fighting for Bread”.

Outside of the main areas of the protests, unrest has hit the peripheries, and locals were displeased with demonstrators disturbing the peace. In Ashkelon, a 20-year-old man was arrested after he began shouting insults at the demonstrators and spitting at them. In Sderot, the demonstrators were doused with water from a passing car. Police identified the dousers as youth from Beersheva.

Dozens of activists stood on bridges and crossroads throughout Israel. We are talking about small gatherings of people who, for one reason or another, refrain from participating in the larger demonstrations that are taking place in Jerusalem and Tel Aviv. These protests have taken place several weeks in a row now. The demonstrators represent a wide range of organizations and movements – from the ultra-left Peace Now, to supporters of the opposition Yesh Atid party, but also those from differing political standpoints who are hurting from the current government policies. 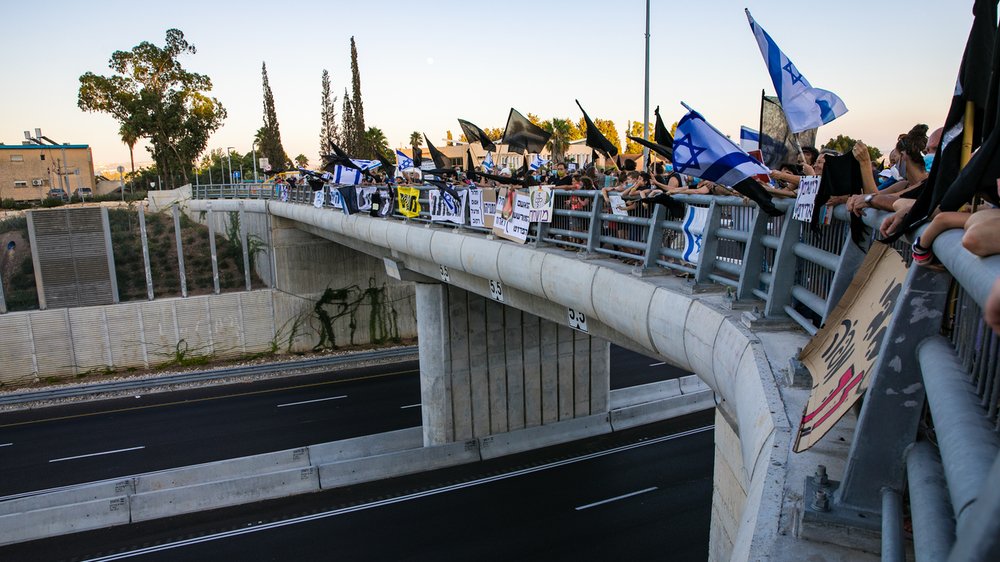 Israelis protest against Netanyahu atop the Sde Yaakov Bridge in the Jezreel Valley.

Knesset opposition leader Yair Lapid, who took part in the demonstrations, went so far as to say: “Anyone who wants to see what a revolution looks like, let him see what is happening on the bridges of Israel. It’s impressive, and it will only stop when this bad government goes home.”

The pressure on the current government is great; the public wants to be safe from COVID-19 and at the same time wants to keep their jobs and livelihood.

The Bibi-Gantz unity coalition struggles to find solutions that will answer all criteria. One such solution that met with much criticism and opposition is “cash for everyone,” under which any citizen over the age of 18 (those who turned 18 by June 30, 2020) earning less than 651,000 shekels per year (54,250 shekels per month) will receive money from the state. The plan gives away resources with disregard to socio-economic status. This means that a hi-tech engineer who hasn’t even been affected by the economic crisis and a cleaning lady who barely covers rent will receive the same amount of money. The media has called this move an attempt by the Netanyahu government to put out fires and shut the mouths of opposition.

Displeasure with the current situation is very evident, and there’s a myriad of clashing opinions on what should be done. But after 3 rigorous election runs we finally assembled a government precisely to deal with the difficulties on all fronts, and despite all our differences, one should accept the democratic process and the public appointees. The right to protest is a vital part of democracy as well, but putting the brakes on the current coalition is unlikely to bring positive outcomes.