All anyone’s talking about is the lockdown, but on our way to town we weren’t stopped by any police roadblocks or asked why we had dared to leave home.

Since Israel Today is a media company, we have permission as members of an “essential” industry to work from our office in downtown Jerusalem. So on Friday, Anat and I drove into town, having arranged to meeting our friends for coffee at the Mahane Yehudah open air market, even though we knew all the cafes were closed.

To our surprise, and contrary to how the media had painted the situation, most of the shops at Mahane Yehudah were open. All the vegetable, fish and bread vendors were still there to provide their goods for the upcoming Shabbat. Of course, there were some difference. Everyone was wearing a mask, keeping a safe distance and refraining from the hugs and kisses on the cheeks that typically accompany Israeli greetings. 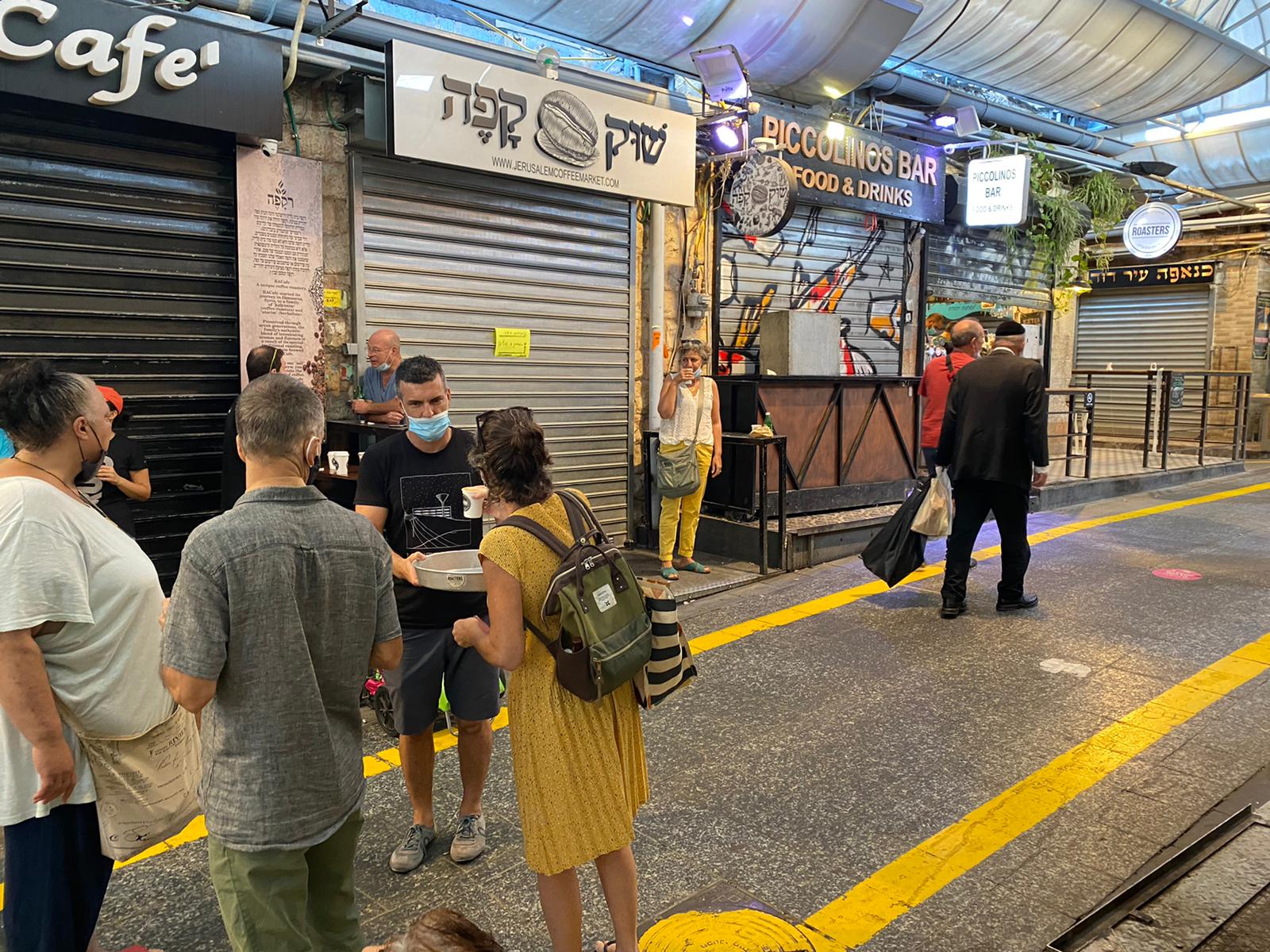 Is the café open or closed? We order via Whatsapp.

The café where we usually meet every Friday was closed, in theory. But the doors were still partially open and we were informed that we could send in our orders via WhatsApp, after which a waiter would come out with our food and drinks. We ordered our espresso, fresh herbal tea (for Anat), water and a small baguette via WhatsApp. About seven minutes later, Aviv called our name and came out looking for us. He brought us the order on his waiter’s tray. We paid in cash. Now we just needed to find a place to sit, since the cafés chairs were all locked inside.

As we looked about, I spotted Shaul Meridor. We had a short chat while the other members of our party decided on where to go enjoy our coffee. Shaul also meets his friends every Friday at the same coffee shop. Until recently, Shaul was the head of the budget department at the Israel Ministry of Finance, but he resigned under the new Treasury Secretary Yisrael Katz. He criticized Israel’s financial policy amid the Corona crisis, and warned of future economic chaos. His father, Dan Meridor, was once a party colleague of Benjamin Netanyahu, and was one of the so-called “princes of the Likud” under Menachem Begin. Others in this class included Ehud Olmert, Benny Begin and Ronny Milo. But when Netanyahu ended his service as Israel’s UN ambassador in the 1980s, he joined the Likud and pushed all the princes aside. Dan Meridor served as Minister of Intelligence under Netanyahu until 2013. 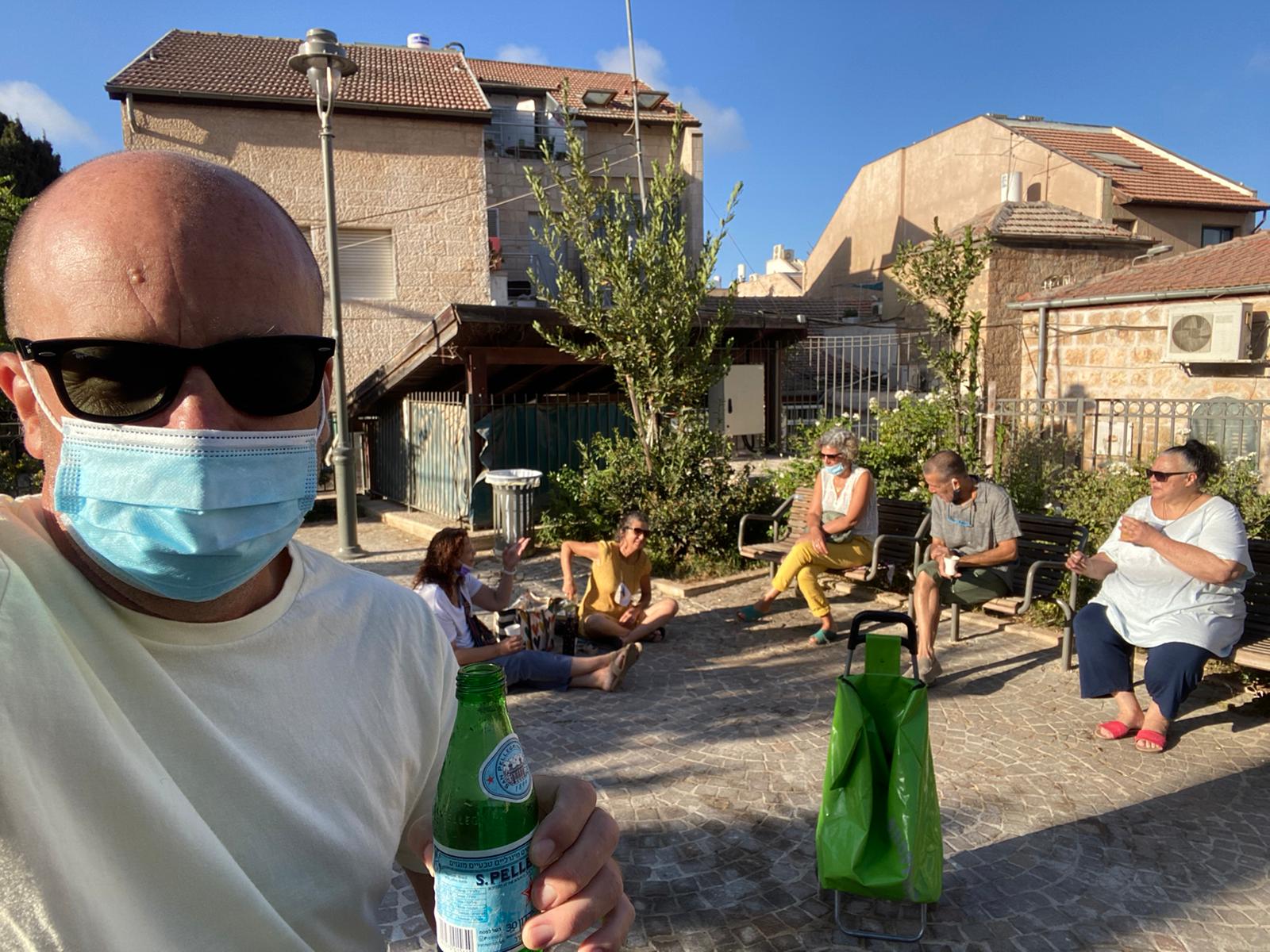 Many greetings from the lockdown!

Every now and then we sit with Shaul in the market. He’s a financial wizard. According what he explained to us, Israel’s treasury could cover the economic impact of the coronavirus crisis, but this would totally deplete the state’s coffers, and Shaul warned against it. But Netanyahu is concerned about public discontent, especially with early elections having become a permanent threat to any government. And so the nation’s policies are made largely on political considerations, and not close examination of the numbers.

Either way, we finally found a place to sit in an inner courtyard a few meters from the market. Lockdown is a valid response to the current situation, but in Jerusalem it looks like everyone has special permission to travel or everyone around us really lives within 1,000 meters of everywhere. In Israel we refer to this kind of situation as IsraBluff. Sure, there’s a “curfew,” but does anyone take it seriously? And does anyone bother to really enforce it? That’s the topic of much discussion in the Israeli media these days. You can’t blame the people. The government could impose restrictions with fewer loopholes and more vigorous enforcement, but it’s too worried about its declining popularity. By the way, Mahane Yehudah is less than 1,000 meters from our offices, so we were fully in keeping with regulations. For now, Chag Sukkot Sameach!