It has long been argued that the chief obstacle to peace in the Holy Land is that the Palestinians expect Israel to effectively roll over and surrender. While they have achieved no great battlefield victory, the Palestinian leadership nevertheless behaves as victors by rejecting any form of compromise with the hated “Zionists.”

This is reflected in the fact that a great many Palestinian “peace activists” themselves reject dialogue with Israel at any level. That’s an odd position for peace activists to take, unless, again, their notion of “peace” makes no accommodation for anything but Israel’s unconditional surrender to their demands.

The international community has remained willfully blind to this phenomenon, choosing instead to blame the lack of peace on Israel, the actual battlefield victors and the only side that has demonstrated a willingness to compromise.

But every once in a while, something happens, or is made just public enough to force the international community to take notice and condemn this behavior.

That’s a lot of peace activists. But sadly, not all of them want peace.

Rami Aman, the head of the Gaza Youth Committee, thought he was doing something positive when he joined a Zoom call with Israelis seeking to finally end the Israeli-Palestinian conflict.

But when Hind Khoudary, who’s listed as an “Amnesty International Research Consultant,” got wind of it, she immediately ratted Aman out to Gaza’s Hamas rulers.

In a Facebook post last Thursday that she has since deleted, Khoudary denounced Aman for talking to Israelis, and tagged senior Hamas officials to make sure they were aware of what had happened. 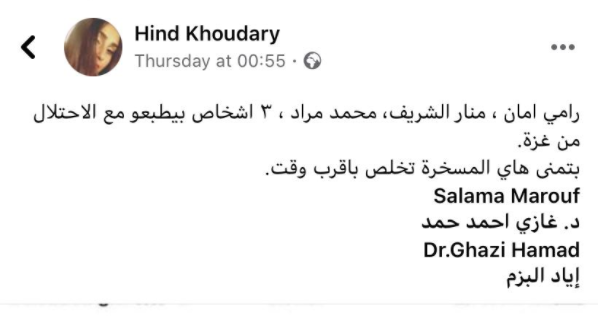 Khoudary’s incriminating post has since been deleted. But nothing is ever gone on the Internet.

That same day, Aman surrendered himself at the Hamas Internal Security headquarters in Gaza City. He has not been heard from since.

Khoudary was been widely condemned for her shameful actions, including by those who typically take the side of the Palestinians, even of Hamas.

Notable among the reactions was that of Peter Bouckaert of Human Rights Watch, who called Khoudary’s behavior “disgusting” and urged Amnesty International to take appropriate disciplinary action.

It is disgusting that a so-called ‘journalist’ got an activist for dialogue arrested by Hamas. Hind was in a journalist…

Khoudary responded to Bouckaert that she would not feel ashamed over what she sees as the noble mission of “fighting normalization with Israel.”

Being ashamed of myself for fighting normalization with Israel? pic.twitter.com/GSYrmmAVAV

And therein lies the problem that the likes of Bouckaert too often fail to grasp. By-and-large, the Palestinians reject normalization with Israel, which is a foundational element of genuine and lasting peace.

Khoudary’s is not a minority opinion among Palestinians. It was Rami Aman who was representing a minority and unpopular view, and for that he was made to disappear.