Israeli and Palestinian Arab firefighters came together this week at a rescue school in central Israel to practice saving lives, regardless of ethnicity.

That might sound strange for two peoples seemingly engaged in an intractable conflict. All one hears in the media are claims of how Palestinian frustration over being “occupied” leads to constant terrorist violence, while Israel’s military responses to that violence are indiscriminate and disproportionate.

But for those willing to look just a little below the surface, examples of coexistence abound.

This week’s cooperation also saw Palestinian Authority Civil Defense chief Yousef Nassar meet with Israel Fire and Rescue Services Commissioner Dedi Simchi, as their men together learned new methods of dealing with fires in buildings and vehicles, as well as the quickest means of rescuing casualties from blocked areas, always a concern in this overcrowded land.

The Palestinian firefighters also instructed their Israeli counterparts on useful phrases and responses in Arabic, given that the Israelis are often called to Arab towns and villages or to assist the understaffed Palestinian rescue forces. It was also pointed out that the Palestinian firefighters have not hesitated in years past to join their Israeli counterparts in battling the massive summer wildfires that often plague the Jewish state.

A statement released by the Israel Ministry of Defense noted that the Israeli and Palestinian firefighters would continue to “take action to strengthen and improve cooperation, with the clear goal of saving lives together.” 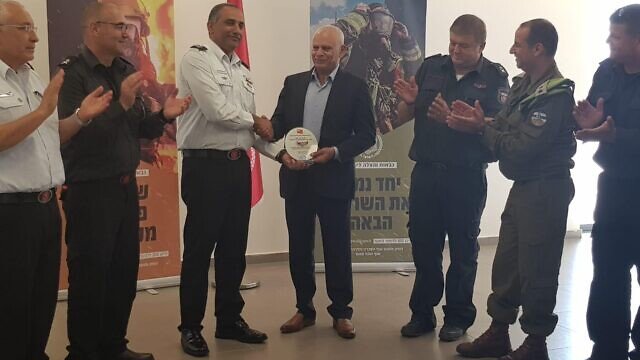