We often highlight the ludicrous claims made by the Palestinian Authority and its media mouthpieces against Israel. But that’s perhaps too easy for Israel’s detractors to dismiss as our own biased viewpoint.

Frontpage Magazine this week dug up a relatively recent post providing a no less outrageous Palestinian claim against a third party, namely that London’s iconic Big Ben had originally stood in Arab Jerusalem.

Before continuing, the reason for bringing up this and similarly absurd Palestinian claims is that they very much speak to the root cause of the Israeli-Palestinian conflict. Palestinian officials and clerics routinely accuse the Jews (not just Israelis) of every conceivable evil, and are notorious for rewriting the history of this region, even in the face of overwhelming written and archaeological evidence.

And by-and-large, the people believe them. At this point, the Palestinian leaders seem to even believe their own lies. 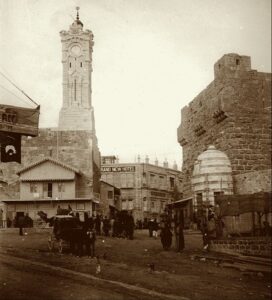 According to the Fatah website (see the English version here), the Hebron Gate clock tower was completed in 1909, when Jerusalem was still under Ottoman rule. After the British took control of the city and established their mandate, they ordered the clock tower dismantled (which is true) and moved, first to another part of Jerusalem, and later to London (which is not true), where it was eventually placed at the north end of the Palace of Westminster.

Never mind that the clock in the old photo is clearly much smaller than Big Ben. What really exposes the Palestinian lie is that Big Ben was built in 1859, a full 50 years before the Jerusalem clock tower, and some 60 years before the British conquered the city. But such inconvenient truths rarely dissuade Palestinian propagandists.

Appropriating another people’s history is the Palestinian Authority’s modus operandi. Most famously, they like to say that Jesus was a Palestinian martyr (see: Was Jesus a Terrorist?), but they likewise lay claim to Abraham, Moses and a whole host of Biblical Jewish figures. Perhaps even more silly is that they at the same time profess to be descendants of the region’s original Canaanite inhabitants (see: Arab Canaanites?).

Unfortunately, this historical revisionism is, despite all the evidence against it, permitted to play a not-insignificant role in the ongoing conflict. The reason the Palestinians refuse to meet Israel’s primarily peace condition of recognizing the legitimacy of the Jewish state is because they have convinced themselves that it is historically illegitimate.

The international community needs to not only stop giving credence to this revisionism, but actually demand that the Palestinians negotiate on the basis of fact, not fiction. That’s what Western power brokers would do if the Palestinians ever actually pressed their claim to Big Ben, and it’s what they need to do in the case of Israel, too.