Rabbi Meshulam Halevi Soloveitchik died on January 31. The number of people that died from Corona in January reached a one-month record high of 1,455. That, however, didn’t deter some 10,000 Orthodox Jews from attending the funeral.

This blatant disregard for clear government instructions prohibiting public assembly for any purpose enraged many Israelis who just don’t understand why, of all people, the Orthodox fail to adhere to the biblical commandment to “watch yourselves very carefully” (Deut. 4:15), which essentially means to not put your life at risk unnecessarily.

This funeral procession was condemned by everybody, including many Orthodox. Deputy Health Minister Yoav Kish said that “regretfully, this funeral will lead to more funerals.” Kish’s factual comment paled in comparison to what others are saying about the Orthodox. Screenwriter and journalist Gal Uchovsky, who is also an LGBTQ activist, said last Friday on Channel 13 that “there should be a war against the Orthodox … a civil war … so that they will understand over there that they need a real shaking up.” The tweet below, posted the day of the funeral, follows in the same vein, calling those assembled “Anarchist Orthodox disease disseminators”.

The media has for its part squeezed this lemon dry by allocating endless talks to the behavior of the Orthodox, while ignoring similar gatherings of Arabs and anti-Netanyahu demonstrators.

While those Orthodox who are ignoring the virus and defying government regulations for no good reason are being severely criticized, the media and politicians are largely turning a blind eye to similar acts of defiance by seculars and Arabs. This can have no other explanation than the transformation of the pandemic into a weapon against Netanyahu and the Right.

This cynical and dangerous use of the pandemic for political aims can be seen on a weekly basis from those demonstrating in the open air in their thousands against Netanyahu, and who now blame him for people dying from the virus they helped spread. The text above the following picture invites people to “mourn for the dead, protest against the dismal failures of the government and rebuild the public’s trust in their representatives.” The bottom of the picture reads “5,000 dead.” 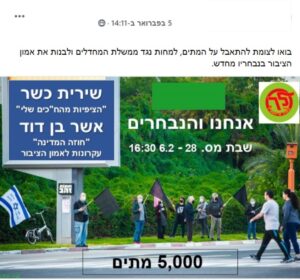 This ugly development of using the virus to achieve political goals is done in the hope that it will help the Left in the upcoming election. But polls, read with the needed grain of salt, show that if anything, the “just-Bibi” bloc is slowly strengthening toward its goal of at least 61 Knesset seats. But given the Center-Left hatred for Netanyahu, it is still possible that this bloc, supported by the anti-Zionist Joint Arab List, will be able to replace Netanyahu, along with the Right.