(JNS) Israel’s Jerusalem Day celebrations, including the Flag March through the Old City, took place mostly without incident on Sunday.

The national holiday marks the reunification of Israel’s capital following the Six-Day War in 1967. Tensions were high throughout the day in what was described as a “fragile security situation,” with some 3,000 security officers spread out across the city, but the violence that the Palestinian Authority (PA), the Kingdom of Jordan and Hamas all warned could happen did not materialize.

The day’s main event was the traditional “Flag March” procession, in which tens of thousands of Jews, almost entirely young religious Zionists, dance and march along two routes. Both start from Sacher Park in Jerusalem and then diverge, with the men heading to the Damascus Gate through the city’s Muslim Quarter while the women march to the Jaffa Gate. They meet at the Western Wall plaza, where they celebrate with music and dancing.

“The nation of Israel did not return to its land just to be scared of threats from bloodthirsty terrorists,” said Matan Peleg, CEO of Im Tirtzu, a Zionist NGO and one of the organizers of the march.

“[Israel’s first Prime Minister David] Ben Gurion, the founder of this country, cried the first time he came to the Western Wall. Every single year we get excited just like it was the first time. This is a day that belongs to the nation of Israel whether you are secular, religious or traditional,” he added. 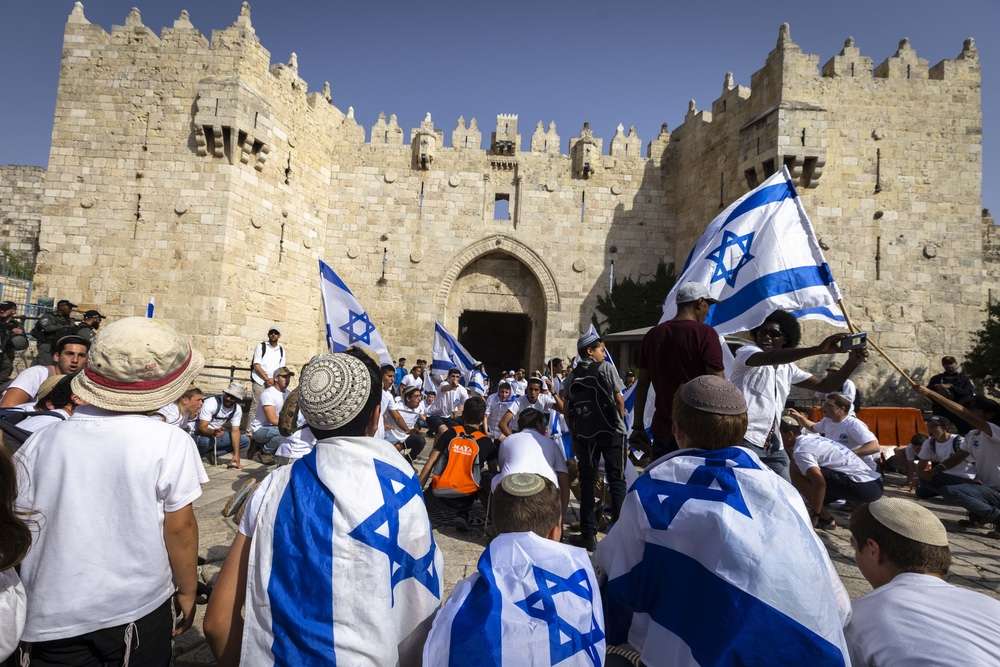 Last year, the march was the pretext for a barrage of rockets launched by Hamas on Jerusalem that led to an 11-day war between Israel and Gaza-based terror groups. As thousands of rockets fell on Israeli population centers, many Arabs within Israel rioted.

Although the situation was more combustible last year, with cases of Arabs attacking motorists, riots on the Temple Mount and disturbances surrounding the planned eviction of Arab squatters from the neighborhood of Sheikh Jarrah (also known as Shimon HaTzadik), few ventured to say with assurance that violence couldn’t break out again this year, especially as last month saw large-scale Arab rioting on the Temple Mount during the Muslim holiday of Ramadan.

Uzi Rabi, director of the Moshe Dayan Center for Middle Eastern Studies at Tel Aviv University, told JNS prior to the start of the march that “combustibility is everywhere. We know that. Until now, it’s pretty good in the sense of the level of tension, even though there were some small accidents, or skirmishes.”

“Hamas actually doesn’t want to start something, because it has a lot to lose. What will actually decide this is the street itself. If violence gets out of control, Hamas will feel forced to get on board with bombs and rockets,” he said.

Rabi put his confidence in Israel’s security forces, who are reportedly keeping an eye on social media, made over 100 preventative arrests and warned the Arab population that Israel will respond harshly to violence. 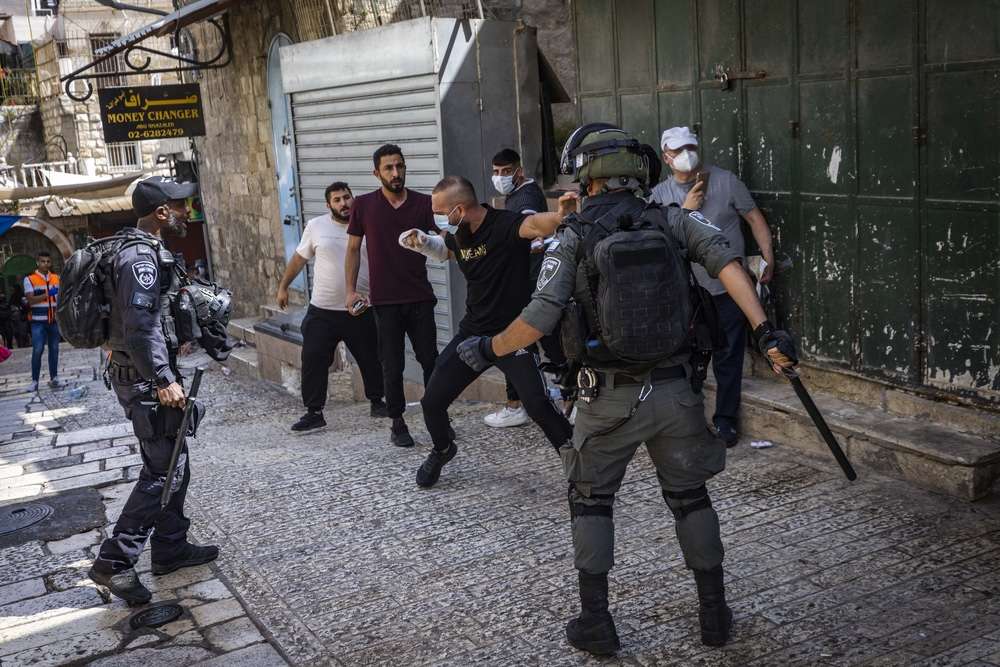 The sharpest threats against Israel came from Hamas. Muhammad Sinwar, a senior Hamas member and brother of Hamas leader Yahya Sinwar, said last week in a TV interview, “To bomb Tel Aviv is easier for us than drinking water.”

As it turned out, Hamas’ calls for the “Palestinian people” to mobilize and confront “the storming of the Zionist colonial settlers” were largely ignored, as were similar calls by PA Chairman Mahmoud Abbas’ office to “challenge” and “confront” the Flag March.

The event came off without serious incident, outside of a few injuries from rock-throwing in the Sheikh Jarrah neighborhood in the evening, and minor skirmishes earlier in the day that involved stone-throwing on the Temple Mount and clashes between Arabs and Jews on Al-Wad Street, the route the Flag March takes through the Muslim Quarter. 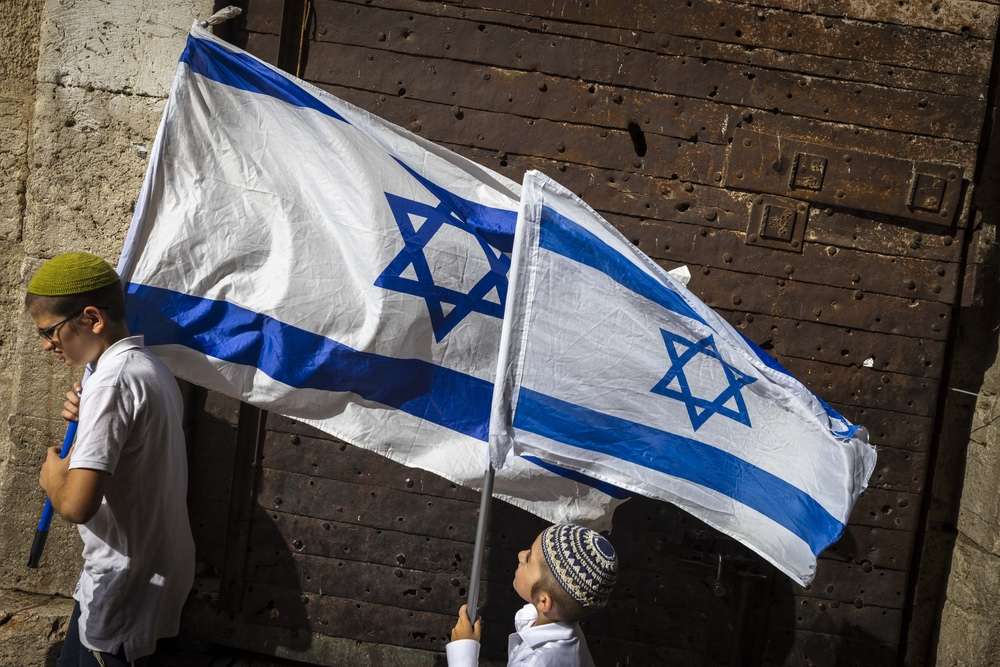 Jerusalem is the heart and soul of the nation. But sadly it is today celebrated as such only by the small minority of national religious Jews. Photo: Olivier Fitoussi/Flash90

It wasn’t clear until May 18 that the Flag March would take place along its traditional route, as the Israeli government faced warnings against the march from both within and without. US Ambassador Thomas Nides voiced his concerns over the planned route to Minister of Public Security Omer Bar-Lev, according to Hebrew news site Walla.

On the day of the march, some coalition members expressed their displeasure. Knesset Member Yair Golan of the left-wing Meretz Party told the Knesset Channel on Sunday that the march is a “provocation” and “unnecessary” display of nationalism.

Rabi told JNS, “I don’t think it would have been smart of Israel to change the course of this whole parade. Having said that, it should look to the security forces and see what their evaluation is, to make sure the circumstances and conditions are right. It’s good to be righteous, but you also ought to be clever and wise.”

Israel’s government in the end proved correct in not yielding to the pressure. In what was officially described as a “festive cabinet meeting” on Sunday morning, Prime Minister Naftali Bennett said, “Flying the Israeli flag in the capital of Israel is self-evident; therefore, we have been crystal clear on the subject from the outset.”