Israeli military tech giant Elbit has announced the establishment of its subsidiary in the UAE (United Arab Emirates).

The subsidiary is working to develop long-term collaborations with UAE military forces. It also facilitates adapting technological solutions to the operational needs of new end users, and leads the transfer of technologies to local partners.

Ran Krill, VP of Marketing and International Business Development at Elbit Systems, said: “The Abraham Accords form a solid foundation for business collaborations in the region. The UAE and other countries in the region are new and important markets for Elbit Systems. We believe that our broad portfolio of solutions, together with our proven experience in building local industrial and technological activities in a variety of countries, position us well to address needs and opportunities in this area.”

The multi-dimensional network warfare display includes a solution for integrative communications networking for air, sea and land from the tactical level to the headquarters level. Also on display – digital radio systems from the “E-lynX” family, as well as the HattoriX fire support system for precise and fast acquisition of targets for maneuvering forces. The presentation of the precise aerial armament systems includes the autonomous roaming “Shrakrak.” The pilot helmet systems on display are of the JHMCS-II type which include a color display as well as the “Brightnite” system which gives helicopter pilots the ability to fly on dark nights and in extreme weather. Directed Infra-Red Counter Measure (DIRCM) systems that protect aircraft from shoulder missile threats were also presented.

Meanwhile, the son of the ruler of Dubai, the Crown Prince of Dubai Sheikh Hamdan bin Muhammad bin Rashid al-Maktoum, visited the IAI (Israeli Aerospace Industries) pavilion on Sunday at the Air Show in Dubai.

The conference was attended by Air Force commanders from around the world, including Middle Eastern countries. 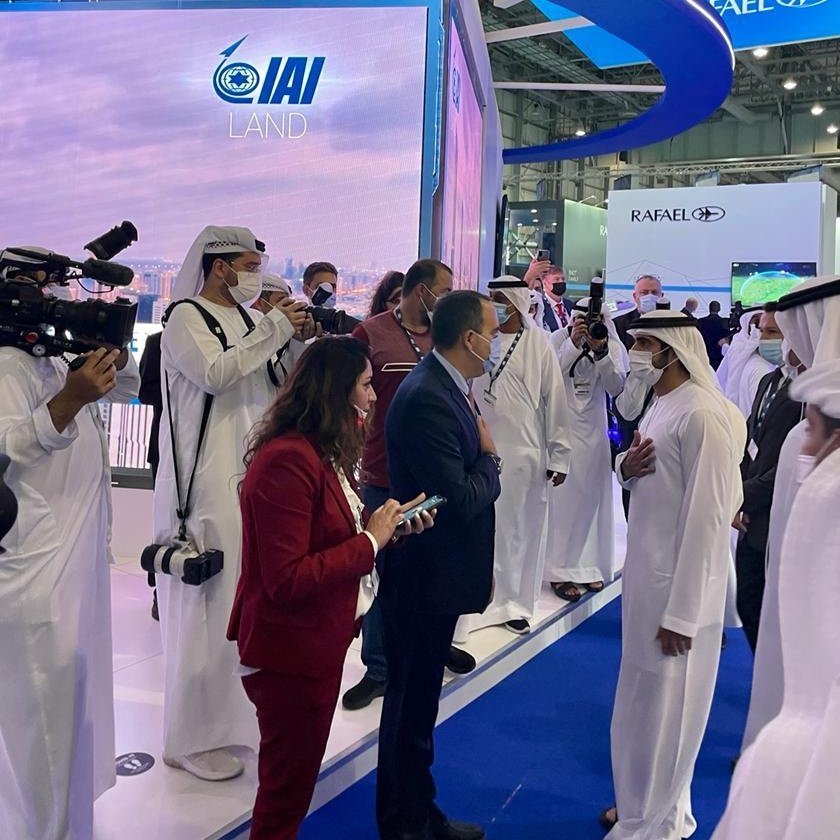 Even the Crown Prince of the UAE visited the Israeli pavilion.

The visit is a continuation of the visit of the UAE Air Force Commander, General Ibrahim Nasser Muhammad al-Alwi, in the “Blue Flag” exercise held in Israel about two weeks ago.

This visit is indicative of the continued development and strengthening of the relationship between the IDF and foreign armies in general, at the national and strategic level; as well as being an example of the growing cooperation with the IDF here in the Middle East.