I went to the Nabatean settlement of Mamshit near Dimona to explore life in the Negev Desert.  What I discovered was a unique tourist experience which most outsiders are not aware of, and yet which is an amazing and culturally enriching experience.

We started off our journey with a picnic lunch at Mamshit, one of the best-preserved Nabatean settlements in the Land of Israel, and which UNESCO has designated a World Heritage Site.  Founded in the First Century CE as a trading post for caravans traveling between Petra and the Mediterranean Sea, Mamshit was one of the wealthiest Negev communities in its day.

From its base in Petra, Nabatean Kingdom rule extended across the desert expanse to the West, from the 4th Century BC to AD 106.  In Mamshit, archeologists uncovered ancient Greek texts on papyrus, amazing silver coins and other rare finds attesting to the greatness of this ancient people.  The area was a thriving center during the Roman period – around the time of Jesus Christ – particularly as it was on the main spice route connecting India, Persia, Saudi Arabia and Egypt with Europe. The Seljuk Empire blocked these economically significant trade routes (like the Silk Road from China) in 1090, triggering the Crusades. Ottoman Empire restrictions in the mid 15th Century spurred European Colonialism.

Despite the arid desert climate, the Negev settlement managed to engage in agriculture by creating a canal system that would conserve water during the winter months, making it accessible for the rest of the year. Although the canal is dry today, its remains are visible below a great canyon. Aside from agriculture, the community also traded in Arabian horses.

Although originally pagan, Mamshit would become a Christian community under Byzantine rule, serving as a Byzantium frontier city.  Discoveries here include the ruins of two churches with remnants of mosaic floors, which the townspeople used for prayer, and a beautiful watch tower. The ancient structures are beautifully preserved. 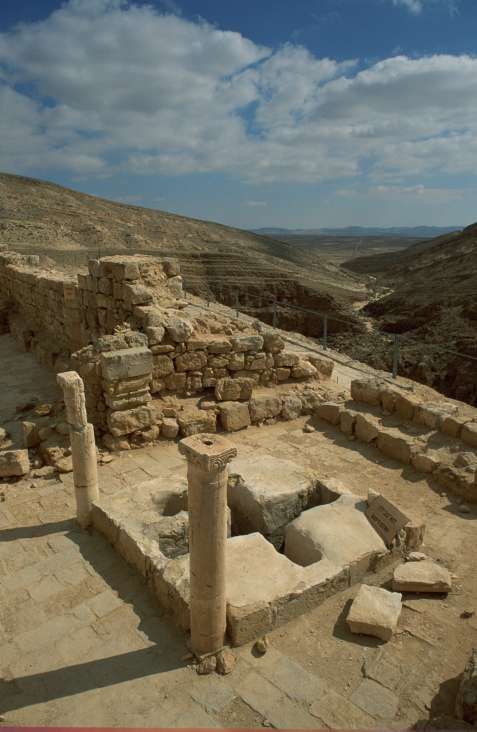 Ruins of a church in Mamshit. Photo by Doron Horowitz/Flash90

Also in really good condition are the homes inside Mamshit. One can literally witness the way these people lived thousands of years ago.  Inside these homes it is possible to feel how the Nabatean brickwork protected the residents from the heat in an age without air conditioning.  Surprisingly, it was actually super effective.  Despite it all, this large community was rendered extinct and the city abandoned following the Arab invasion in the 7th Century.

After exploring Mamshit, we journeyed onwards to Ein Yorke’am.  On the way, we got lost and found ourselves in the high security area of the Dimona Nuclear Reactor. A local helped guide us away from the reactor and to take a hiking trail towards Ein Yorke’am.  It was blazing hot, but if you can bear the heat a little and don’t mind jumping over a few rocks you can take a dip in a dessert oasis.  While there we discovered an entire regiment of IDF soldiers doing just that after a whole day of training in the area.

Leaving Ein Yorke’am, we headed to the Negev Camel Ranch where we would spend the night in Bedouin huts.  There are no TV’s or phones inside these rooms, and cellphone access is poor, but there is air conditioning, which is invaluable after a day in the blazing dessert heat. The huts sleep up to five people, if you don’t mind being a bit cramped. Our evening was spent dining on a Bedouin shepherds’ meal, drinking Bedouin tea and Arabic coffee, and enjoying various sweets as we chatted away. One of my friends asked after entertainment, but our guide explained: “Here, the best entertainment we have to offer is the quiet, the solitude and the companionship of friends.”  So, instead of being distracted by concerts, dancing and piped music, we were focused upon socializing with one another as we sipped away at the most amazing tea and coffee in the world.  To protect the Bedouin community, no alcohol is served on the Negev Bedouin Ranch, although should you wish to bring your own in from outside you may. 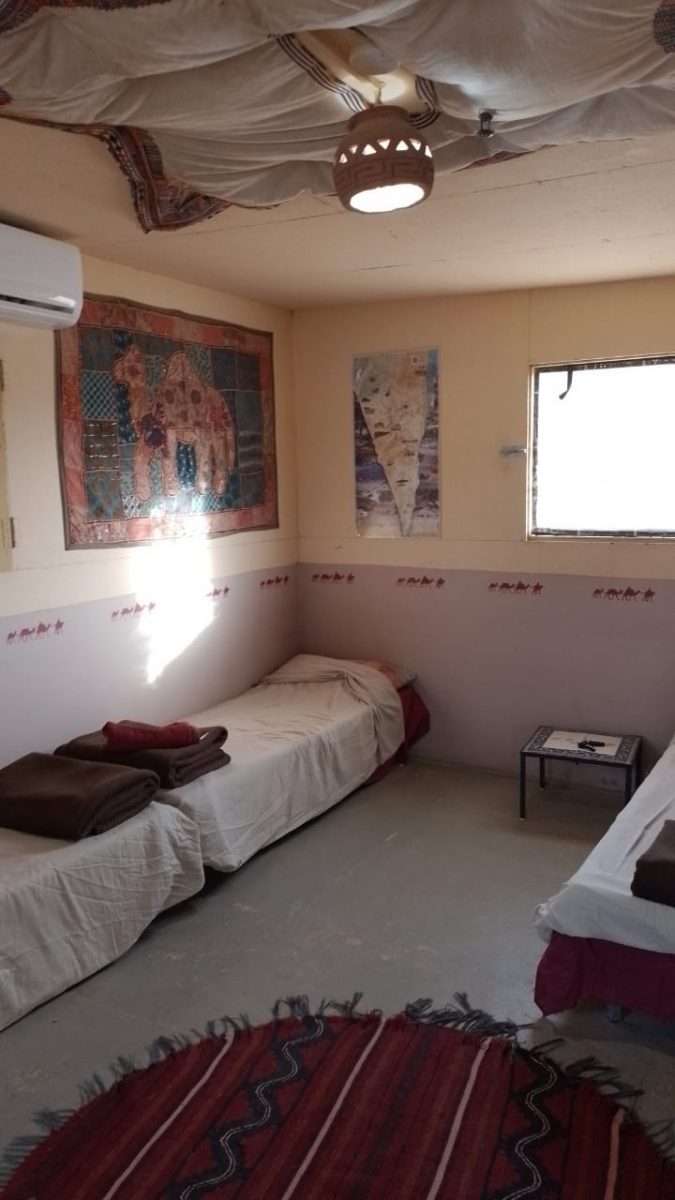 One of the Bedouin huts for sleeping at the Negev Camel Ranch – Photo: Rachel Avraham

After talking late into the night beneath the desert moon, we finally fell asleep. In the morning  we awoke to an amazing Bedouin breakfast, which included labane goats’ cheese, pita bread, omelet, olives and other tasty things. Afterwards, we joined a camel caravan going from the Ranch to Mamshit and back.  It was absolutely phenomenal being able to view Mamshit from the back of a camel.   Although there were times where the ride was a bit bumpy, the view was breath-taking.  We were experiencing a truly awesome desert adventure.

Later, on the way back to Netanya, we took a rest-stop in Beersheba and ate lunch at Saba Jebato, a world-renown Israeli restaurant based in the Negev’s provincial capital.  I dined on an amazing chicken salad and drank the tastiest cherry beer imaginable.  From there we toured the Museum of Islamic and Near Eastern Cultures, which is housed inside of a historic Ottoman Turkish Mosque. This mosque dates from the era when the Ottoman Turks made Beersheba their provincial capital in order to subjugate the unruly Bedouin.   Not that the museum told the  story of tensions between the Ottoman Turks and the local Bedouins.  Rather, it housed an entire exhibit on Muslim civilization in Africa, which was also very interesting.

Next, we toured the Ottoman Turkish Train Station, and saw the same trains which the Ottoman Turks used to travel on during the First World War. These trains used to take Muslim pilgrims from Mecca and Medina in Saudi Arabia to Damascus, and from there to Turkey. There were only a couple of Holy Land stops included in this elaborate network, which was cut off when Israel declared statehood. Indeed, it is no longer possible to take a train from Jerusalem to Damascus, or from there to Mecca and Medina.   In the wake of the Abraham Accords, however, we hope that one day there will again be an elaborate system of trains connecting Middle Eastern countries to one another, just as there was during the Ottoman Period a little over one hundred years ago.