Reading the Signs in the Sky

People continue to get worked up by solar and lunar eclipses, but God told Israel to take a different view

Last month’s impressive solar eclipse was also visible from Israel, though only partially so.

In the African Republic of Congo, the so-called “ring of fire” was already visible in the early morning. This phenomenon was also on full display in the Arabian Peninsula and in a strip across India to southern China. An annular solar eclipse that, according to astronomers, could only be seen on two percent of the earth’s surface.

The celestial event sparked a lot of discussion and media debates. Signs in the sky are always a sensitive issue over which people have always disagreed, especially pious Jews and Christians. God through the prophet Jeremiah (10:2) told the people of Israel that they must “learn not the way of the nations, nor be dismayed at the signs of the heavens because the nations are dismayed at them.” In other words, the signs in the sky shouldn’t scare us. 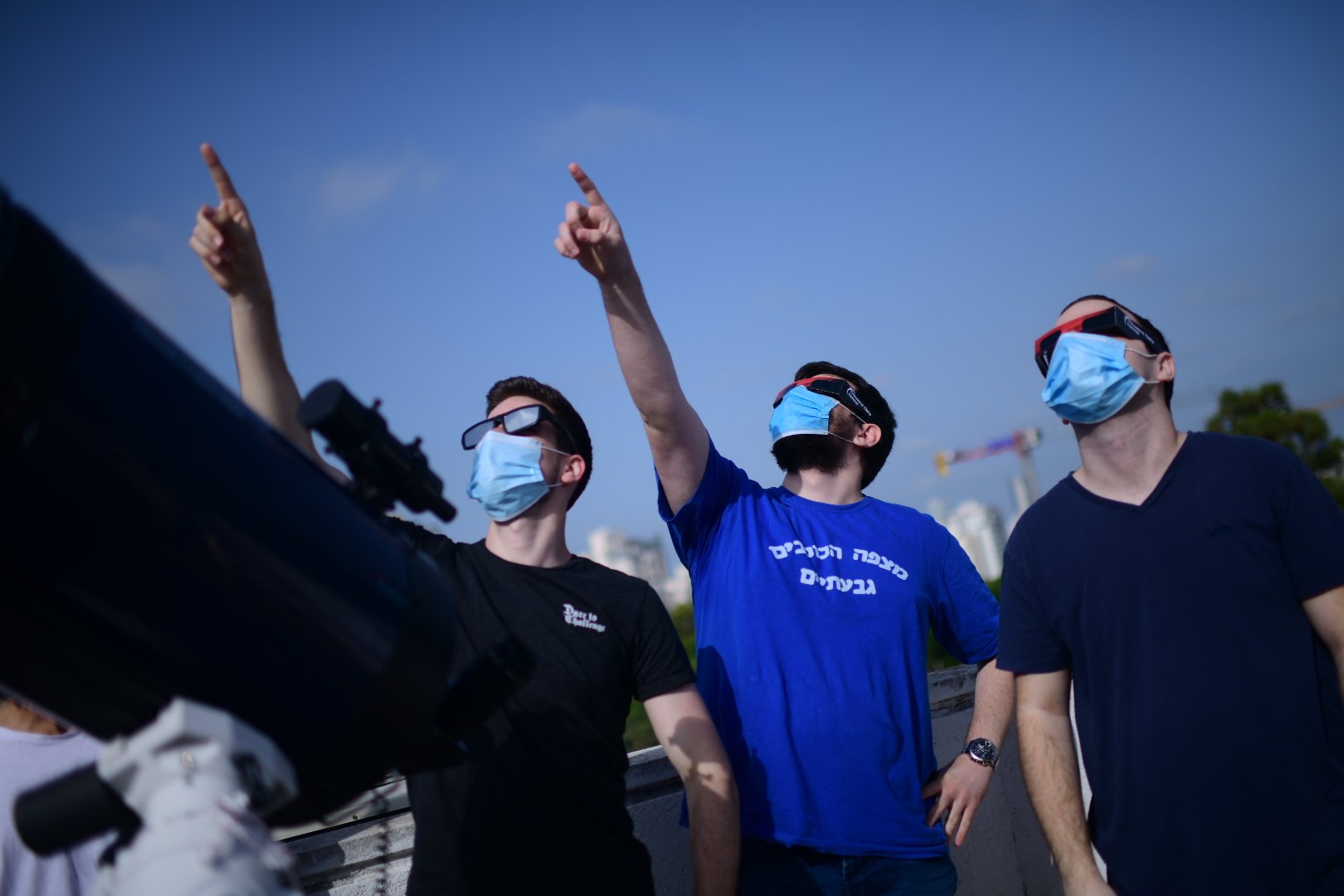 The sun, moon and stars were already an issue in the Bible. The prophet Amos (8:9) says: “And in that day, declares the Lord GOD, I will make the sun go down at noon, and I will darken the earth in the daytime.” This darkness occurred during the reign of King Jeroboam II (787-747 BC) in the northern Kingdom of Israel. The prophet dealt with a number of natural disasters, such as the great earthquake in the time of King Usia (783–742 BC) in the Kingdom of Judah.

Amos was a farmer from Judah who was very attached to nature. This explains why in his promises he spoke of natural disasters and constellations in the sky. “He who made the Pleiades and Orion (כימה וכסיל), and turns deep darkness into the morning and darkens the day into night…the LORD is his name” (Amos 5:8). Incidentally, Job (38:31) also mentioned the same constellations when he asked God whether he could “bind the chains of the Pleiades or loose the cords of Orion?” The prophet Isaiah (13:10) describes something similar: “For the stars of the heavens and their constellations will not give their light; the sun will be dark at its rising, and the moon will not shed its light.” What we now understand to be solar and lunar eclipses were incomprehensible at that time. These natural phenomena were like miracles in the eyes of people, a sign that no one could explain.

Now biblical scholars in Israel believe that Amos’ prophecy, in which the sun sets at noon and brings darkness over the earth, is likely referring to the famous “Assyrian eclipse” of June 15, 763 BC.

But earlier the Bible speaks of what can now be understood as an annular (“ring of fire”) solar eclipse. “Sun, stand still at Gibeon, and moon, in the Valley of Aiyalon!” And further it says: “And the sun stood still, and the moon stopped,

until the nation took vengeance on their enemies.” The tenth chapter of Joshua is describing a real celestial event.

The “still sun” has always been a mystery in the Bible. A few years ago, researchers and archaeologists used Egyptian records to discover that an annular eclipse occurred over the Middle East in 1207 BC. This event could explain the biblical account. The verse states that the sun and moon stood still, but one can also understand from the Hebrew wording that the sun and moon stopped doing what they normally do, namely, shining. And this can be related to a solar eclipse during which the sun no longer shone. This timing was God’s miracle, which helped Joshua to win. Not all rabbis agree with this, as one has to bear in mind that the stars also stopped in the sky.

There is also a solar eclipse in the story of Sisera’s army at the Kishon stream (Judges 4 and 5). At this brook, Sisera’s army met the Israelite forces led by Barak and Deborah. When Sisera saw the Israelites, he fled with his warriors to Harosheth-hagoyim. “From heaven the stars fought, from their courses they fought against Sisera” (Judges 5:20). The stars in the sky fought with Israel, they left their orbits and caused a solar eclipse at the right time. That confused Sisera: “And the Lord struck a terror into Sisera, and all his chariots, and all his multitude, with the edge of the sword, at the sight of Barak; insomuch, that Sisera leaping down from off his chariot, fled away on foot.” Remember, Amos told us that the Gentiles are afraid of the signs in the sky, but that the people of God must not be.

The prophet Joel (3:4) mentions the blood moon before the final judgment: “The sun will darken, the moon turn blood-red, before the day of the Lord arrives, that great and terrible day.” A total lunar eclipse is often referred to as a “blood moon” since the moon appears very reddish. “I will set signs in the heavens and on the earth, blood, fire, and columns of smoke.” These words from the previous verse (Joel 3:3) remind us of Passover, as they appear in the Jewish Haggadah, as do the words of the prophet Zechariah (14:6), which read: “In that day there will be no light; the luminaries will dwindle.” 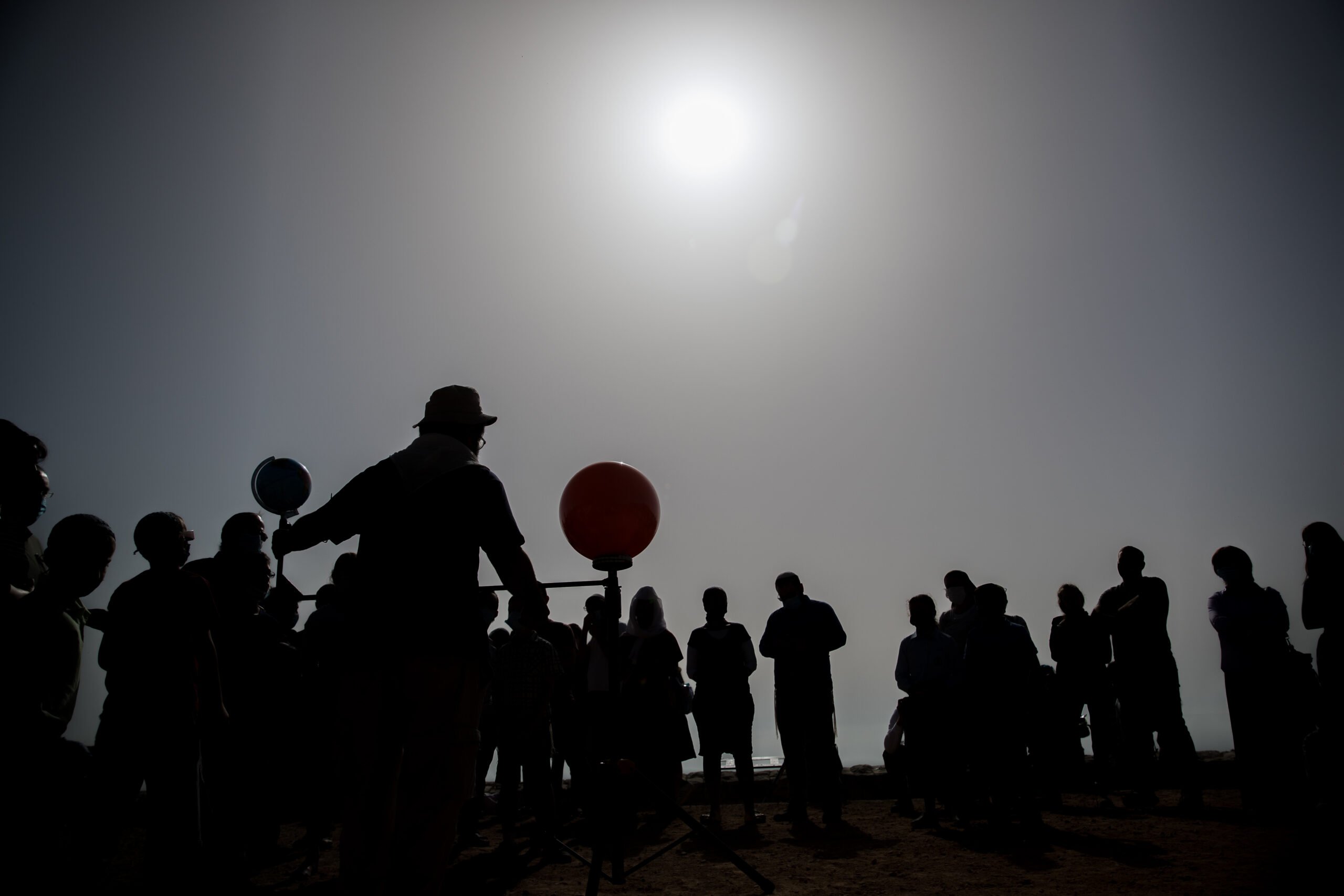 An eclipse-watching gathering on Mount Scopus in Jerusalem.

The New Testament speaks of a solar eclipse during the crucifixion of Jesus during the Passover week. Matthew, Mark and Luke all mention that from the sixth hour there was darkness over the land until the ninth hour. The birth of Jesus also began with signs in the sky. In the Gospel of Matthew, astrologers (“wise men” who read the stars) came to Jerusalem from the Far East. They followed the star to the place where the child was born. There the star stopped, over Bethlehem. You could say that the birth of Jesus was written in the stars. Shepherds and seers were the first to worship him. Even in early Christianity, people were looking for an explanation for the Star of Bethlehem. Origen, the theologian from Alexandria, wrote in the third century that it must have been a comet. This idea has remained popular until today. Jesus’ life is framed between two celestial events.

In Jewish thinking, the moon is the patron of Jacob, i.e. Israel, whereas the sun is the patron of Esau, and thus symbolizes the nations. From this it can be understood that a solar eclipse is a negative sign for the nations and a lunar eclipse is negative for Israel. The Jewish calendar is based on lunar cycles. In contrast, the Gregorian calendar is a Christian sun-based calendar. What determines our life and time are the lights in the sky, and according to Jeremiah, the signs in the sky should not frighten us, neither the constellations, nor the lunar and solar eclipses.