Who is Practicing Idolatry in the Land?

And no, this has nothing to do with Jews who believe in Jesus. These Jews pray to a different rabbi.

For weeks Orthodox Jews have been accusing each other of idolatry in their media outlets and on posters on the walls in their neighborhoods. The dispute began with a so-called pashkavil, the large posters with long texts written on them that one often sees plastered on walls throughout ultra-Orthodox neighborhoods in Israel. Rabbis use these posters to bring their messages to the people, as the Internet, radio and television are strictly forbidden for ultra-Orthodox Jews.

An Orthodox community called “God’s House” (בית ה׳) had expressed publicly their delight that this year the whole fire spectacular at Lag Ba’Omer on Mount Meron in the Galilee had had to be cancelled. The community condemned this celebration, which when viewed by outsiders can be seen as a mass act of idolatry. All through the night the participants celebrate with music, prayers, dance and an enormous bonfire at the grave of Rabbi Shimon Ben Yochai. Some 500,000 people from throughout the country annually flock to this event in the Galilee.

The text on the pashkavil in question reads: “The annual celebration on Mount Meron, which is led by some of Israel’s top sages and rabbis, was cancelled thanks to divine intervention, so that Jews will rediscover the path and the desire for the Temple and for the Almighty.” 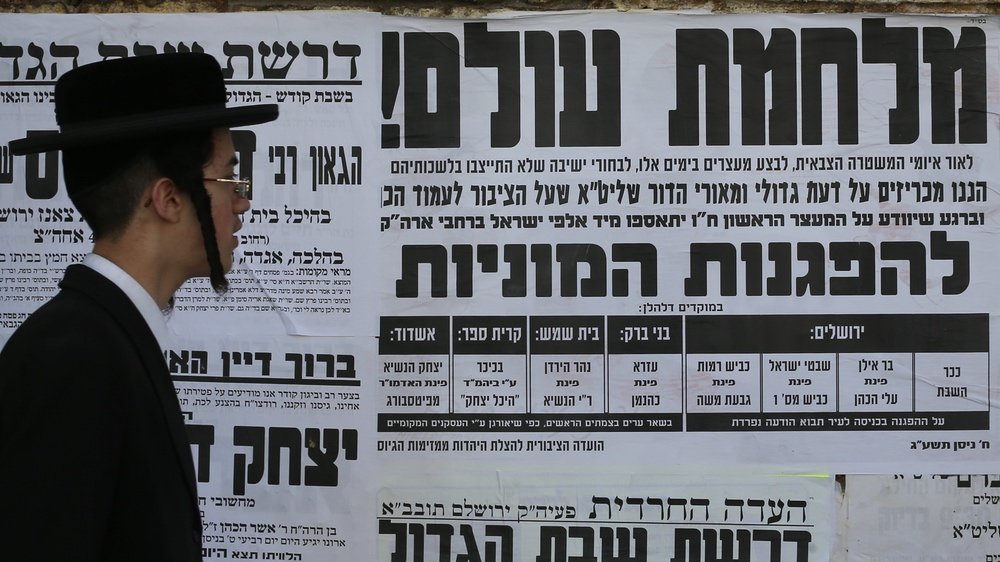 An Orthodox Jew reads pashkevil posters in Jerusalem. In a community that rejects the Internet, radio and TV, this is the best way to get a message out quickly.

Idolatry in the Land

The Jewish festival marking the anniversary of the death of Rabbi Shimon Ben Yochai (160 BC) has, according to the “God’s House” community, become a form of idolatry in that Mount Meron is viewed by participants as holy, even surpassing the sanctity of Mount Moriah, where the Jerusalem Temple once stood.

“Today Jews are taking pilgrimages to the holy Mount Meron and are forgetting the true sanctuary in Jerusalem,” the pashkavil continued. Quotes were provided in which Mount Meron was compared to the Holy Mountain in Jerusalem. This constitutes a sin before God, and Rabbi Shimon Ben Yochai would certainly not be happy about it. The pashkavil further noted that in the Bible there is no commandment for Jews to hold sacred Lag Ba’Omer bonfires on Mount Meron, or anywhere else.

This of course angered numerous rabbis and Orthodox Jews in the Land, who viewed it as blasphemy against God. On Orthodox websites and on radio stations this criticism of the Mount Meron event was harshly rejected. Many were shocked as to how fellow Orthodox Jews could regard this as idolatry. However, this is not the first time that Orthodox Jews have leveled harsh criticism over the annual mega event. Many are of the opinion that the festival has overstepped all boundaries. Previously this was not the case. The spectacle that takes place these days on Mount Meron is nothing like the more subdued events of years past.

In Jerusalem, Avichai, an Orthodox Jew, told us that this whole thing has nothing to do with God. He quoted the prophet Isaiah: “Their land has also been filled with idols; they worship the work of their hands, that which their fingers have made” (Isaiah 2:8). This verse appears in the same chapter where it states: “For the law will go forth from Zion, and the word of the Lord from Jerusalem” (Isaiah 2:3). 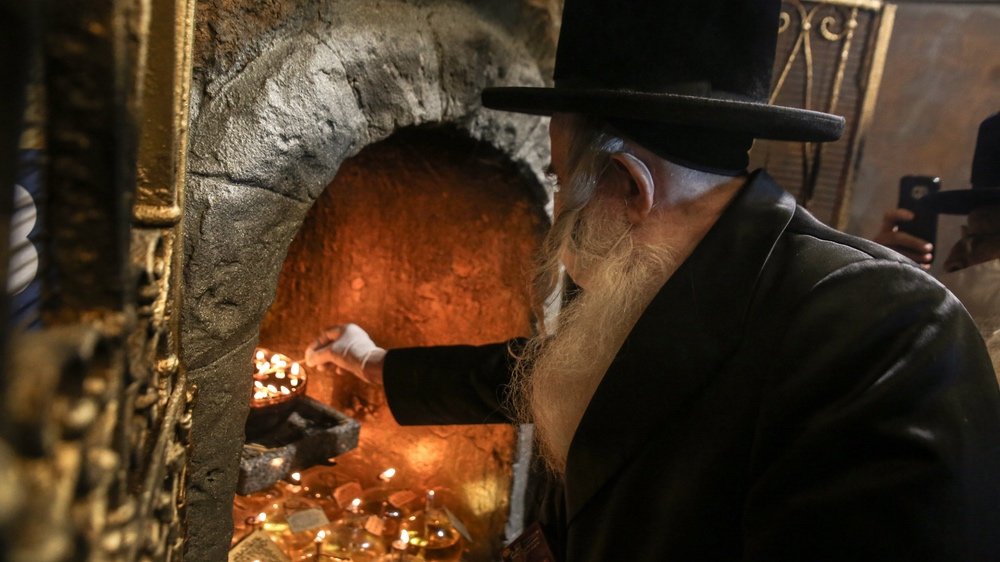 A prominent rabbi offers prayers at the tomb of Shimon Bar Yochai, also known by his acronym Rashbi, a 2nd-century sage believed by many to be the author of the Zohar, the chief work of Kabbalah.

Nothing to do with Messianic Jews

As in biblical times, the Jews are now accusing one another of blasphemy against God. It is worth noting that all of this has nothing to do with Jesus. Jews who believe in Jesus are usually accused of being idolaters because in the eyes of Orthodox Jews, Jesus is a false Messiah. This time, Messianic Jews are not involved in the dispute. 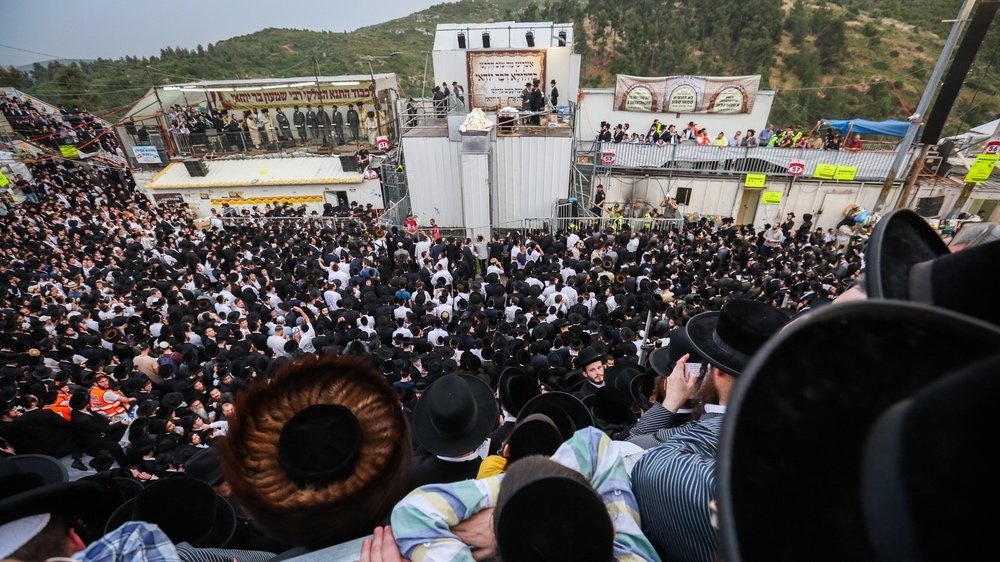 Once again, the disunity in the nation by the maligning of one another in this matter of blasphemy is coming to the fore, which seems to be a plague that simply won’t go away. In discussions on the topic, the “strange fire of the sons of Aaron, Nadab and Abihu” was presented as an argument, for which they were both given the death penalty by God. In contrast to this, the “eternal fire, that should be kept burning on the altar and should never be extinguished” was referred to, which also burned in the Temple in Jerusalem (Leviticus 6).

Mount Moriah in Jerusalem should not have any competitor, and this is why many are disturbed by the spectacle on Mount Meron. Even the Israeli police start to feel the pressure each year when they are trying to keep order at this event . Half a million people, mainly Chassidim and charismatic Jews, who, according to Orthodox accounts, seem to be “tripped out” during this night. Whereas it is written that “God does not want to have any other gods besides Himself.”

Idolatry is not a topic that appears only in the Bible, it is also relevant to the times we are living in today. Idolatry has led a section of the Jewish population astray, and this results in tensions such as those appearing now within the Orthodox population. We need to imagine the same tensions in the biblical stories, such as for example in the desert with the Golden Calf, and between the prophets and the people.

This rumpus in the streets and alleys of Jerusalem, as well as in the Orthodox media, testifies as to how throughout the generations the nation keeps on stumbling over the same obstacles. On the other hand, this is also proof that we are definitely dealing with the same people and nation, although they lived for two thousand years scattered in the Diaspora. The same DNA, for good or for evil.