A rocket launched from Gaza smashed directly into the roof of the Montenegro home in Beersheba at 6am Sunday morning. “At 3am we heard the alarms go off and I told my husband we better go sleep in the bomb shelter. Thank God we were asleep in the shelter when the rocket hit. No one was injured,” Kyla, the mother of 4 children, told Israel Today.

“An enormous boom woke us up at 6am, but I could not believe that it was our home that was hit. I opened the heavy metal door of the bomb shelter and heard a loud sound of water rushing into the house and saw a river flooding the floors,” Kyla said. “The rocket must have hit the solar water heater on the roof and because of all the water the explosion did not cause a fire. This caused the rocket to explode on the roof and not inside the house where it would have brought the whole house down upon us.”

Kayla and her husband believe this was a miracle. Also, the fact that she decided they needed to sleep in the bomb shelter. “I had stomach surgery just last week and it is too difficult for me to get up and run to the bomb shelter every time there was another siren. Thank God we were asleep in the shelter when the rocket hit,” she said. 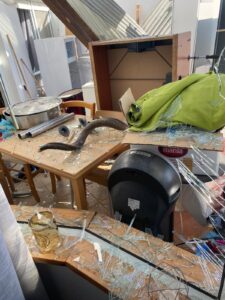 Damage to the Montenegro home. (Courtesy)

Police and emergency services arrived within minutes and were surprised to see that the rocket was a direct hit on the home and yet no one was injured. Even the house only sustained minimal damage.

The Montenegro family immigrated to Israel in 2003 from Argentina. “We didn’t really want to come Israel after the war with Iraq and the Scud missiles were falling in the city centers,” Kyla continued. “But after one of our children almost died from a critical condition and then recovered, we knew we had to make Aliyah (immigrate to Israel),” she said.

The Messianic congregation they lead in the Negev town of Beersheba is made up of Spanish-speaking Jewish immigrants. “Since the COVID pandemic we had to close down our meeting hall and moved all the equipment to our porch. Now we have no home to live in and no meeting place for our congregation,” Kyla explained.

The roof of a Messianic Jewish pastor's home in Beersheba after it was struck by a #Hamas rocket on Sunday morning.#PrayForIsrael pic.twitter.com/u6hQUXenrw

We asked the family what they think Israel should do to protect the people, especially where they live in the south of the country which has been the main target of Hamas’ short-range rockets. “I don’t know. The situation is complex. Our daughter will soon begin her service in the IDF. In the meantime, we believe that according to the Bible there will be no peace until the Messiah comes. So we wait and pray for peace,” Kyla said.