This past year of 2021 was yet another event-packed time in the existence of the young State of Israel, with many positive and negative developments.

First, there was the ongoing Corona crisis, which was originally brought under control after an intensive vaccination campaign and restrictive measures.

These measures included a complete ban on commercial flights to Israel, and the closure of schools, commercial centers, and other places where public gatherings were being held.

As of January 1, 2021, Israel already had one million citizens who had been vaccinated, and on March 17, Israel became the world leader in the number of citizens vaccinated.

As a result of the massive vaccination campaign, Israel reached a situation on June 15 wherein the Corona crisis appeared to be under control.

The Ministry of Health in Israel reported at the time that the number of Corona patients was the lowest since the start of the vaccination campaign in December 2020.

However, on June 25, 2021, the situation changed and the number of new cases of Corona started to rise again as a result of the so-called “Delta” variant.

The number of new patients was highest among children who had not yet been vaccinated.

As a result of these developments, the obligation to wear masks in all closed spaces was reintroduced.

Prime Minister Naftali Bennett’s new government changed the lockdown policies strictly enforced by the previous government of Benjamin Netanyahu and decided to keep the country open and the economy running.

Bennett also decided to allow limited gatherings on the condition of maintaining other restrictive measures.

On August 1, 2021, Israel became the first country in the world to introduce a third vaccine shot (booster) for citizens in high-risk groups. This was later extended to the entire population.

Despite this, more than a million Israelis decided not to be vaccinated and the way was opened for the fifth wave of Corona cases when the Omicron variant reached Israel at the end of 2021.

This variant also proved resistant to the previous vaccinations. More than a third of the Omicron cases had received three shots.

In November, a list of ‘red’ countries that Israelis could not fly to was published. That list included European countries and later the United States and Canada.

Now at the end of 2021, there is again a sharp increase in the number of new Corona cases in Israel, but the number of seriously ill patients treated in hospitals remains fairly stable.

See: Herd Immunity is Talk of the Day in Israel 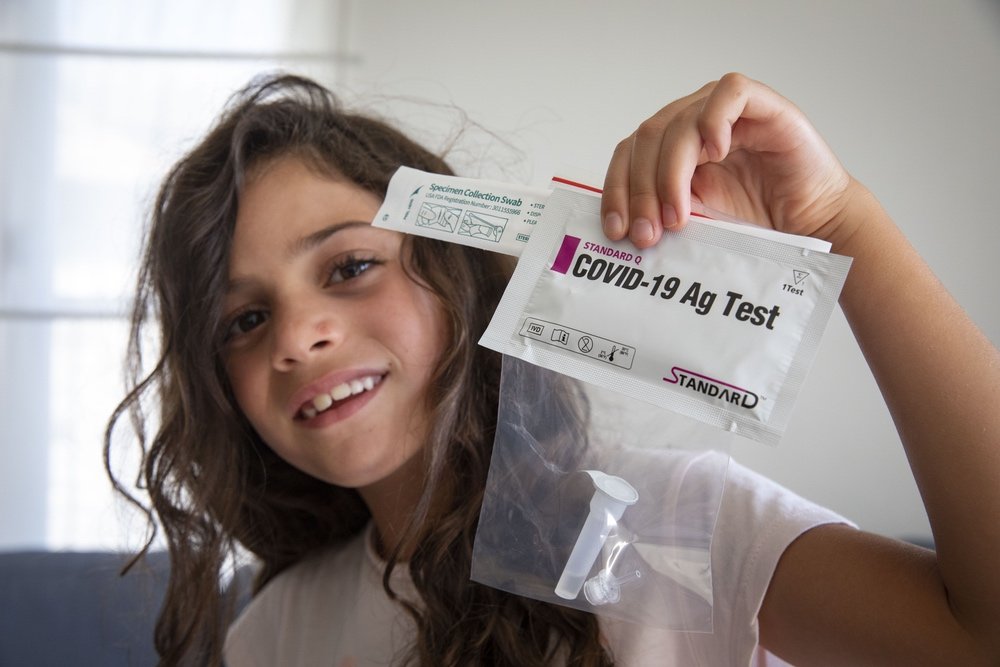 An Israeli child takes a COVID-19 antigen test before heading off to the first day of school. Photo: Olivier Fitoussi/Flash90

In 2021, Israel again faced war when, at the end of May, Palestinian terror groups in Gaza launched a massive rocket bombardment of towns and villages in southern and central Israel.

The war started with a volley of rockets into Jerusalem that the Israel Defense Forces (IDF) could not leave unanswered.

See: At the End of the Day, It’s All About Jerusalem

Hamas and Palestinian Islamic Jihad (PIJ) initiated the war because Israel allegedly endangered the Islamic shrines on the Temple Mount in Jerusalem and was, according to the terrorists’ charges, trying to change the status quo there.

A protracted lawsuit against Arab squatters of properties in the Sheikh Jarrah district was also used to justify the war.

These squatters refused to comply with an order from a Jerusalem court. The court had previously ordered the Arab families who occupied the properties to pay rent to the Jewish owners of the houses, something they refused. 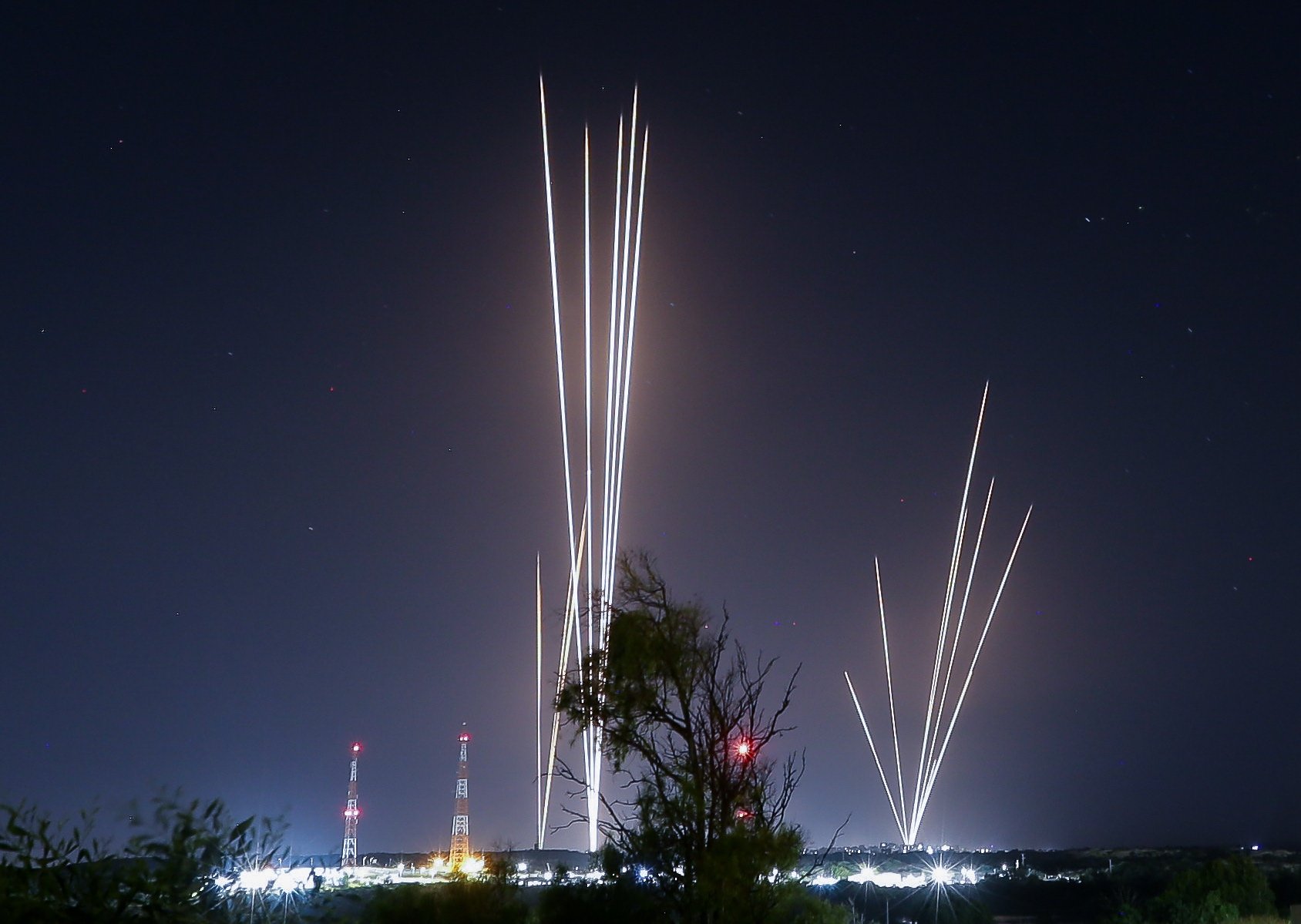 An attempt at new Intifada

At the end of 2021, Hamas and PIJ tried to unleash a new intifada in Jerusalem, Judea and Samaria. The number of terrorist attacks there rose sharply, forcing the IDF and Border Police to call in reinforcements to keep the situation under control.

Israel also decided to strengthen the position of the Palestinian Authority (PA) to prevent a takeover by Hamas and PIJ in Judea and Samaria.

PA leader Mahmoud Abbas is deeply unpopular among Palestinian Arabs and polls show 90 percent of them want Abbas to resign.

The intent was clear; despite the fact that the government in Jerusalem knows that Abbas’ regime is thoroughly corrupt, the Israeli government wants to prevent a ‘Gaza scenario.’

Prime Minister Bennett’s government prefers keeping the PA in power over a Hamas takeover in PA administered areas of Judea and Samaria. 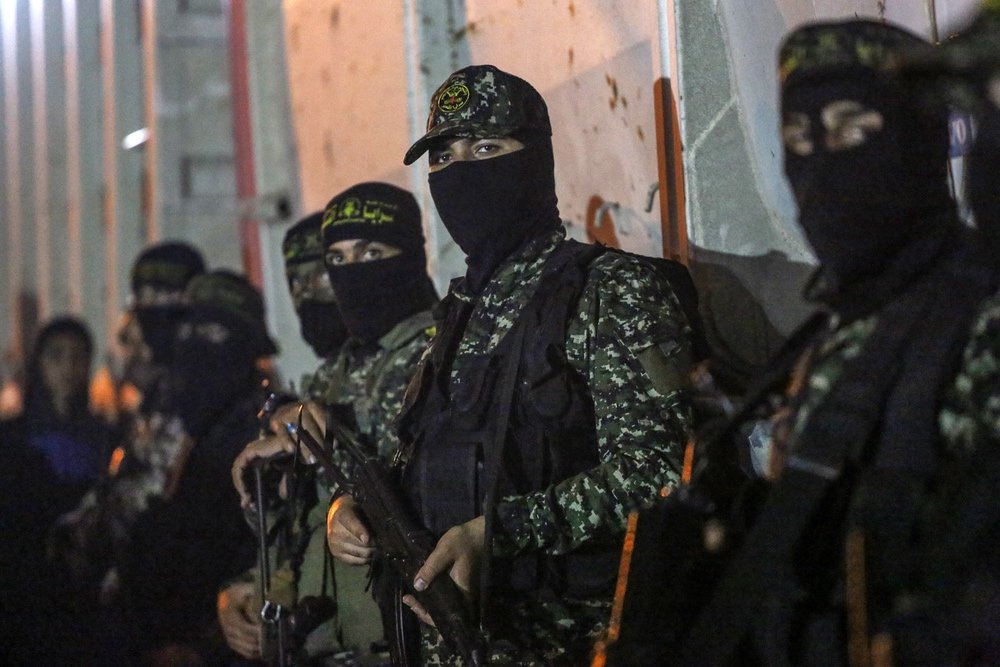 2021 was also the year that ended Benjamin Netanyahu’s long reign in Israel.

Despite Netanyahu’s Likud party winning the March elections by a large margin, Netanyahu failed to put together a coalition. This was mainly due to personal resentment against Netanyahu by politicians from left-wing as well as right-wing parties.

After that, Yair Lapid of the Yesh Atid party was given the opportunity to form a government and against all odds, the former TV host succeeded.

Lapid did this by putting his ego aside and appointing Naftali Bennett, whose party Yamina won just seven seats in the election, as Israel’s prime minister and included the Arab party Ra’am in his coalition.

See: Without Bibi: A Government of Change Rises in Israel

Bennett will remain prime minister for two years and then, if the coalition persists, Lapid will replace the Yamina leader and become prime minister of Israel for the remaining two years of the term.

However, the ‘government of change’ has a tiny majority of just one seat.

So the question is whether the opposition led by Netanyahu will succeed in bringing down Bennett and Lapid before the latter can take over as prime minister in 2023.

See: Poll: Government of “Change,” But Not of “Stability” 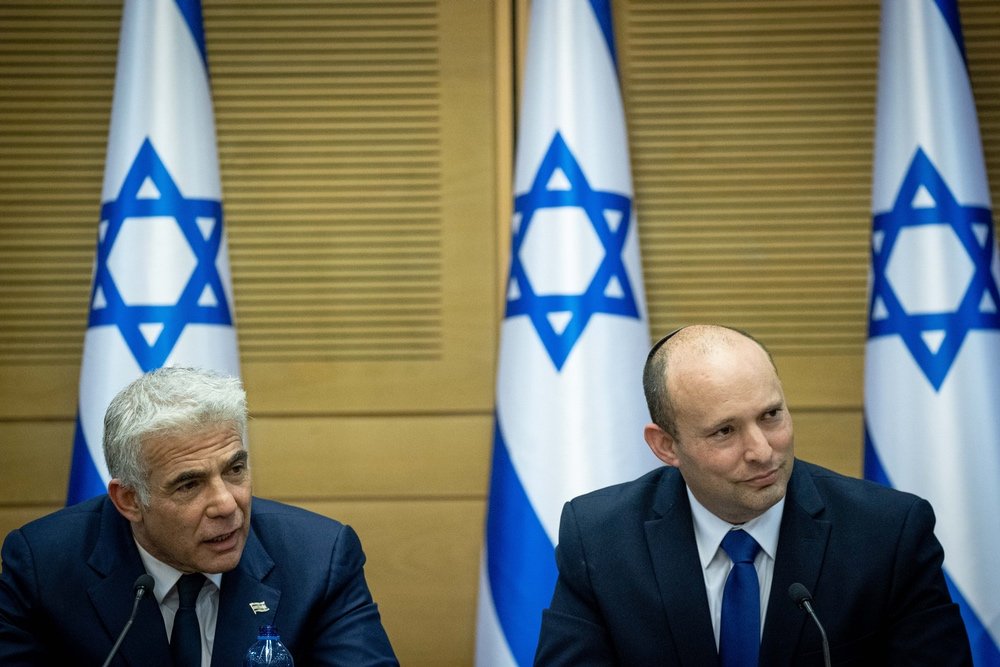 In the field of international politics, 2021 was a year of stark contrasts.

On the one hand, there was a series of spectacular successes in relations with a number of Arab and Muslim countries.

Kosovo, for example, established official relations with Israel and pledged to establish its embassy in Jerusalem.

Then there were the new relations with a number of Arab Gulf states and with Morocco, which even concluded a defense pact with Israel in November.

The United Arab Emirates and Bahrain further implemented the so-called “Abraham Accords” and opened embassies in Israel, while the Jewish state did the same in these Arab countries.

Trade between Israel and these Arab countries has grown enormously and relations have been extremely friendly until now.

See: Bennett in the UAE – the Abraham Accords Are For Real

As a result of these newly flourishing relations, ties also improved with Egypt and Jordan, two countries that already had peace agreements with Israel, but never until now wanted more than a cold peace.

The visit was extremely successful and resulted, for example, in renewed Israeli gas supplies to Egypt and cooperation on the rehabilitation of Gaza after the war in May.

See: ANALYSIS: Egypt’s Changing Position in Relations With Israel and the Middle East 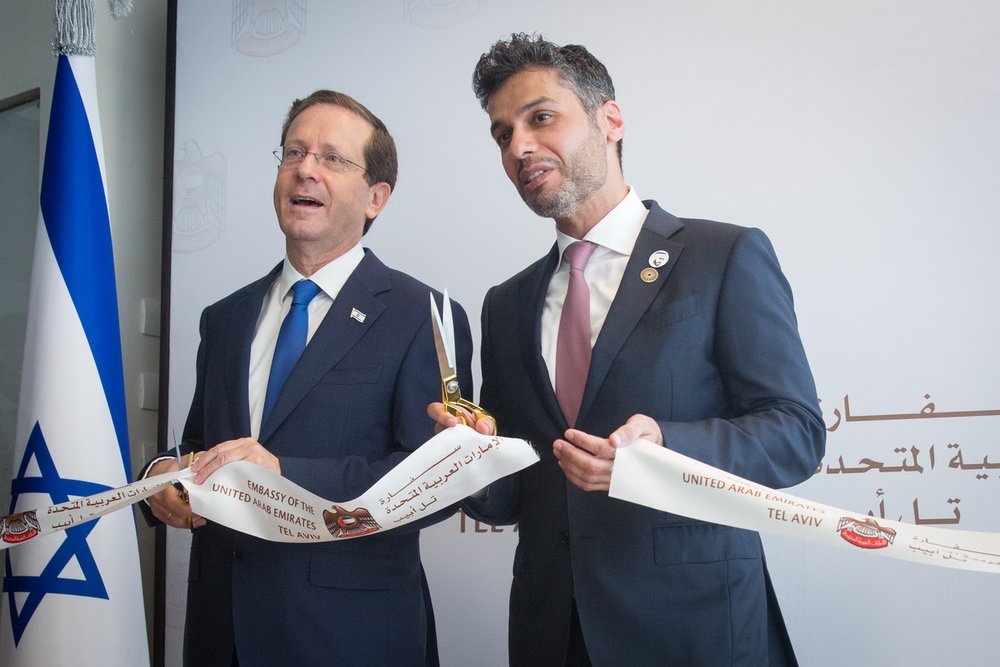 The growing threat from Iran

But despite normalization in relations with Arab countries, the strategic threat to Israel continues to increase, mainly due to Iran.

The Islamic Republic stepped up its belligerent activities against Israel in 2021 and is continuing unabated to develop a nuclear weapon.

Because the government in Jerusalem has no confidence in American attempts to revive the nuclear deal with Iran, Israel is now more or less openly preparing for military action against the Islamic Republic.

To this end, a budget of 1.5 billion shekels has been made available to the Israeli military, which now conducts frequent exercises in preparation for military action against Iran’s nuclear facilities.

Israel, meanwhile, through its spy agency Mossad, will step up its activities in Iran and try to carry out new acts of sabotage.

At the same time, Israel continues to disrupt Iran’s military build-up in Syria and Lebanon.

Earlier this week, containers with equipment for transforming crude missiles into precision weapons were hit by Israeli forces in western Syria’s port city of Latakia. Two Iranian militiamen were killed in the attack.

It was just one of the dozens of times that the Israel Air Force took action against the Iranian axis in Syria during the year 2021. 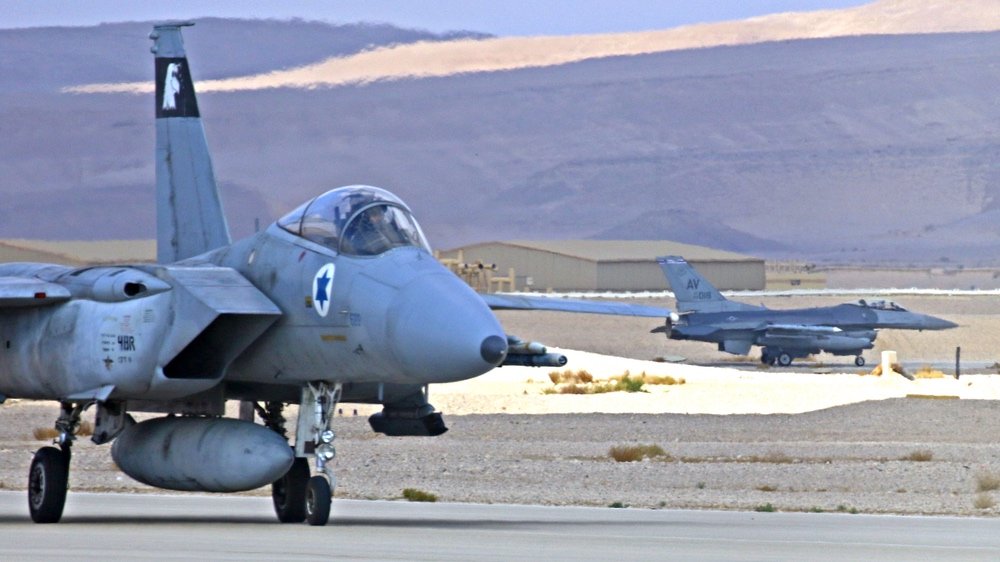 Israel is ready to strike Iran on its own if needed. Photo: Ofer Zidon/Flash90

Much more happened in Israel during 2021, with new developments in a positive or negative sense, occurring almost every day.

For example, the Israeli economy became the fastest growing in the world last year with a growth rate of more than seven percent.

At the same time, an increase in the number of very poor Israelis was registered in this ‘Corona year.’ More than 20 percent of the population now lives below the poverty line, partly as a result of the Corona crisis.

See: Tel Aviv is World’s Most Expensive City? How Did That Happen? 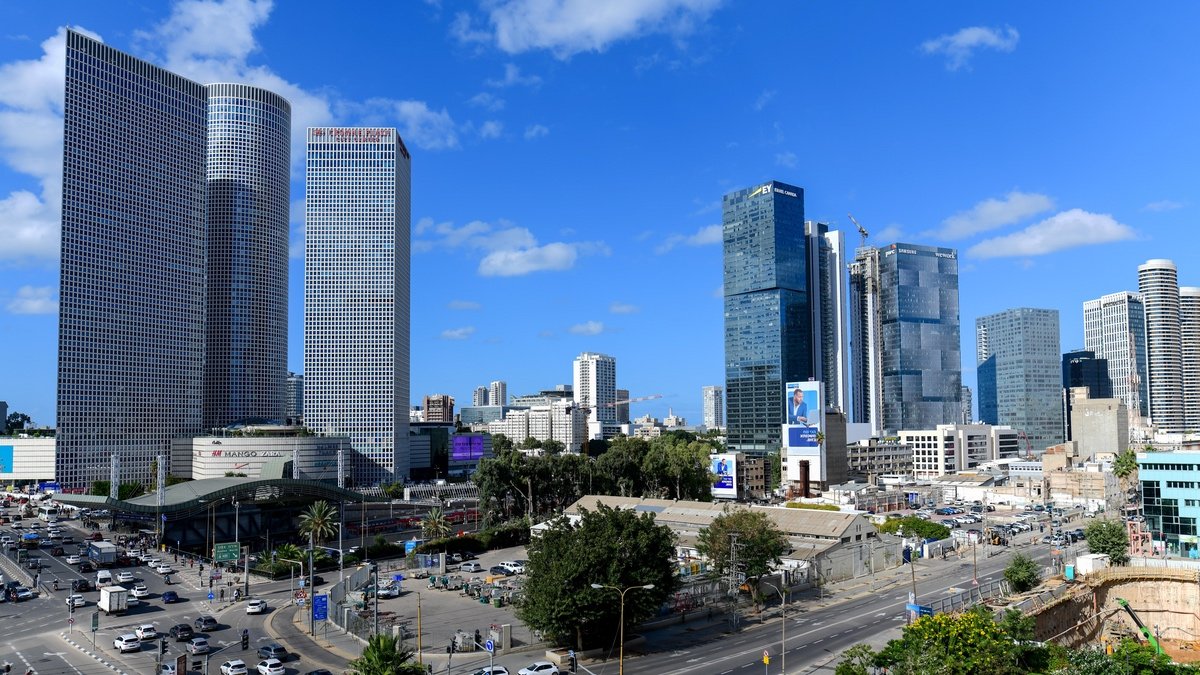 Relations between Arab and Jews in Israel also soured in 2021 with violent confrontations during and after the 11-day war in May happening in mixed cities every day.

Arab rioters set 10 synagogues and 112 Jewish homes on fire, looted 386 Jewish homes, and damaged another 673. A staggering 849 Jewish cars were set on fire and there were 5,018 recorded instances of stone-throwing against Jews.

Jewish rioters in return damaged 13 Arab homes and set 13 Arab cars on fire, while there were 41 recorded instances of stone-throwing against Arabs.

Several people from both communities were severely injured and two died.

There are currently efforts underway to repair the damaged relationships between Arabs and Jews in those mixed cities, but many people think too much has happened this time around and are skeptical of chances that co-existence between the two population groups can be restored.